Being a fan of Nohmad Strange Attractors since ages, I am totally in awe discovering that Joel Robichaud has made the update for it!!!

For all of you who are curious about attractors, here a couple of articles I have found quite easy to read, not much Math, don’t worry

but I think it is good to know how our beloved plugins work, at least the basic stuffs, right? And yeah, I do love Math quite a lot!

My educated guesses are that you can either compile it (and if I did it, very likely everybody can do it. I slavishly followed these instructions: HOW TO BUILD A VCV PLUGIN) or you can ask directly to Joel Robichaud via GitHub (the link is in my previous message).

i was in fact inspired by nohmad in making my wiqid anomalies chaotic lfos. i have included the lorenz attractor, but not the rossler one, as i don’t find it as interesting. tho it would be easy enough to add if people would like my version of it. i did add several other attractors.

the main differences are that i focus on the lfo range and have extended it a lot on the slower end. my modules do not really go into audio range, while nohmad’s does. also, i only expose one variable to be tweaked with the “shape” knob (tweaking several variables quickly leads to more stable non-chaotic cycles or escaping to infinity). on the other hand, i do have a z output, plus a self-invented fourth output derived from x+y-z.

if there is interest in implementing other attractors, feel free to contact me about it!

Would be nice if you can do the Rossler also! Was wondering why you did not included this because its relative famous.

Oh boy. Oh boy. The random generators in VCV are getting more and more numerous! I can’t be more happy!!

Well, shall we talk about Chua’s attractor or Hénon’s attractor, apart of course Rossler’s?

And, if we consider the general definition of “strange attractor” we can also include primitive fractals like the Cantor’s Dust (and I can hear echoes of another plugin, here…)

I know Cantor’s Dust is not an attractor in the rigorous sense but if you want I can give a mathematical explanation about that!

Too bad, I cannot help at all in coding but about Math, that’s another matter. There, I can help!

So yeah, there are some strange attractors that can be implemented, if you want!

I love putting strange attractors into a Lissajous scope. I was using the LZX Navigator video synthesis module for a while. Then I made a Reaktor Block that could do rotations on X, Y, and Z.

I don’t have the skills to program a VCV rack rotator but one would be great in this context.

Talking about attractors, I remember I had a video from CODE PARADE that is pretty interesting, if you still want to implement some attractor in your plugin. I am pointing it to you because it has some nice graphic to watch at and some easy peasy explanations already made to listen to.

I am playing with your chaotic LFOs in these days and I am having a lot of fun, but I am a chaos (mathematical chaos, that is…) addicted so count me out for an objective review! It’s like giving candies to a child!

mostly what i would look for in other equations to implement in new modules, is

there are a few i want to test, such as the dequan li attractor and the liu chen attractor.

I am wondering if the Frank Bussard’s FORMULA plugin can be used as test plugin, in a way or in another.

Have to put my hands on it, after all nearly all the equations of the attractors are simple and do not require elaborated formulas so my educated guess is that FORMULA can be used as a playground.

To me, at least. I guess a programmer can skip that step!

Forgot to say. Those attractors looks fabulous in those 3D rendering!
We really need a 3D scope here…

that would be wonderful indeed! but way beyond my simple programming skills…

I totally understand you.

BUT I have peeked around…

Have a look here —> OSCILLOSCOPE MUSIC
Not a new topic, I know, but have a look at the oscilloscope software!

Maybe someone will be inspired… It happened before.

In my experience with oscillographics, the scope or drawing doesn’t need to be be an actual 3D space. The scope is still drawing X and Y. It’s the rotation of the vectors that makes it possible to explore and display 3D. I don’t think the math is particularly hard. I found the original idea in an Axoloti oscillographics demo sketch and I was able to translate to other graphical programming environments like Reaktor and Max MSP. But I certainly don’t have enough programming experience in C to make it for VCV rack easily.

Rotating a Vector in 3D Space 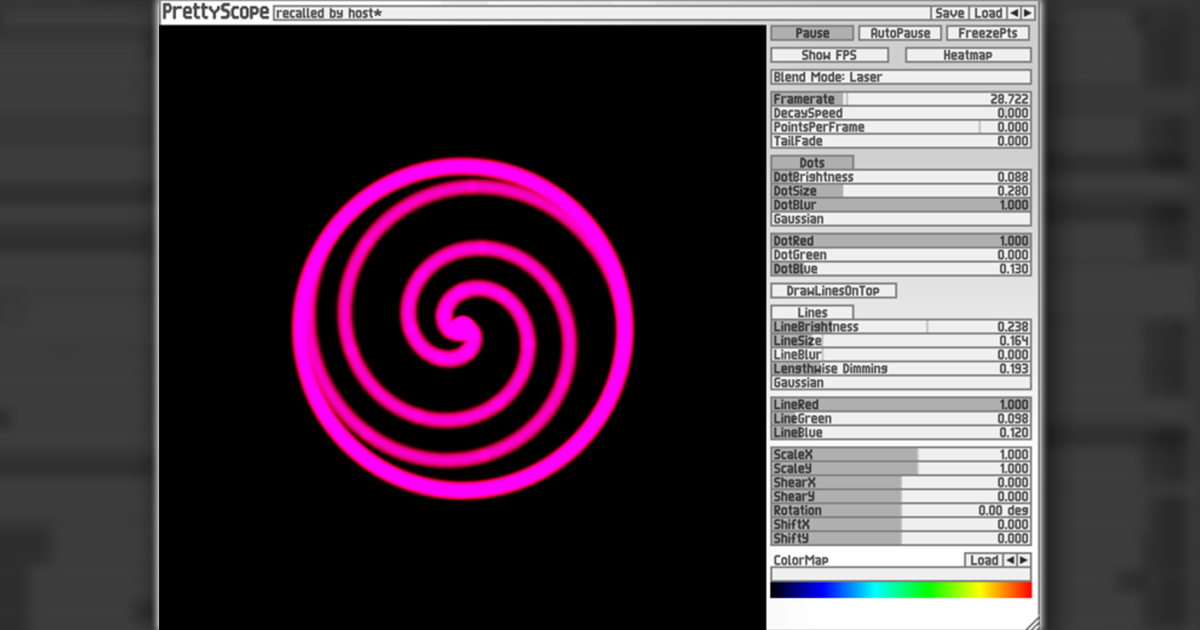 PrettyScope captures the beauty of analog oscilloscopes and offers a wide range of aesthetic options. While fundamentally designed as a waveform studying tool, it has evolved into a powerful sound and music visualizer.

The fun will really begin when the rotations can be patched for modulation in an environment like VCV. Separating rotation from the scope allows for rotations to be modulated in interesting ways and provides for the “Z’ input.

Like the LZX Navigator video synthesis module, Pretty Scope does have rotation about the Z axis which is still plenty of fun.

Maybe I should make a video demonstrating how it works in Reaktor?

One of my best patches is broken because Noise is not available; I’ll try to get this built for Mac and post a link. @Vortico, is there anything we can do about semi-abandoned modules? I could fork it, but I wouldn’t want to step on any toes.

We don’t normally allow module removals in the VCV Library after a module has been “established”, unless we failed to catch it. What is the plugin slug, module slug, and version of the plugin that last included it? (This information can be found in your patch if you open the file with a text editor.)

(not sure why we post/hijack on this thread) I have ported many of those abandoned modules and even “adopted” two of them. To keep away from stepping on any toes, I usually make sure to:

What module specifically are you talking about (slug name)?

He is talking about Nohmad - Noise.

As far as I can see that plugin does not exist for VCV 1.x.

Nohmad modules for VCV Rack. Contribute to joelrobichaud/Nohmad development by creating an account on GitHub.

It looks like it might even work on v1.x (per the last commit), but we were never notified that a new version was available: VCV Library: Nohmad

@joe.mcmahon I added Nohmad for integration with the next Plugin Manager update.

Now, we better get to hear that “best patch” somewhere. Post a video!