Hello Rackheadz! This is a out-of-the-canon topic, I guess. PREAMBLE: I am not a programmer, not even a bit. I cannot work on it. Damn. This is just the offer of an idea.

I have seen a lot of nice plugins that generate casual or pseudocasual impulses and I have a lot of fun with them. Some of them are even pleasant to watch!

And I had the idea you already know by now: why not apply these automata to VCV?

The concept is really not new nor difficult, as far as I have seen: a toroidal square grid (https://en.wikipedia.org/wiki/Torus) of a given dimension where cells can live, move, breed and die accordingly to the rules choosen: Conway, Langton, Brian or whatever.

The impulses can be driven in a way like NYSTHI BOH!NGLER does but:

I don’t really know how BOH!NGLER works so I am just poking in the dark but:

A lot of CAs (Cellular Automata) also uses colors to underline the generations: a generation is the state of the whole system after a certain amount of time: what cells are alive, what are dead, what have moved and what are in a stable system. Cells of generation #7 will be differently colored from cells of generations #1. Colors are used also just for aesthetic purposes, why not?

This could be applied to FM, PITCH, whatever (different colors = different values) and it is a discrete internal state (it is not a continuous VC flow) so it can be used in very different ways (like a discrete counter).

It could be awesome to LOAD preconfigured “DPD” or DIGITAL PETRI DISH where a certain amount of cells are pre drawn and once they are loaded they start to grow and evolve. This has been inspired by the music of Jerobeam Fenderson (https://www.youtube.com/user/jerobeamfenderson1): he makes music that “DRAWS” oscilloscope pictures so I asked myself why not make music that DRAW CAs patterns instead?

Too bad, as I stated at the beginning, I am no good at all in coding or I would have started to work on that because I have searched around and there’s nothing similar about this thing. It’s something unique, new.

I have one and only one request: IF someone will start working on such project, I would love to be remembered and credited as the one who suggested it first. Yeah, a bit narcissistc from me but that’s the only request.

Following, there are some links of CAs you can watch and play with to have an idea of what these things are and how they work. 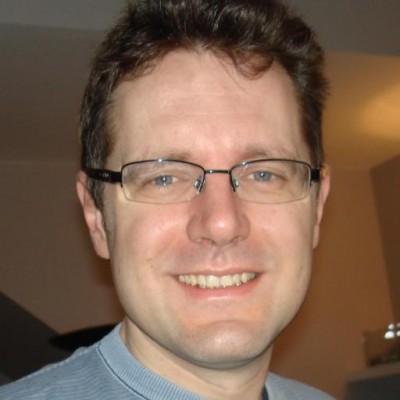 Colorful implementation of Conway's Game of Life. Contribute to jimblackler/lifedemo development by creating an account on GitHub.

Full-color clone of Conway's Game of Life, with a decent GUI

And now I can only watch and stare, dammit!

Or maybe keep on learning and in a couple of years trying to make the plugin by myself… Dunno… First let’s talk about it.

The open-source software modular Wren already did something similar as a sequencer, I don’t think it is in a torus playing field though, don’t know. 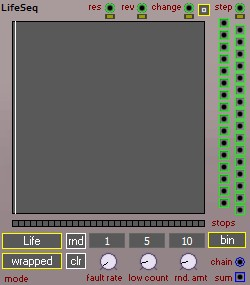 Uhm… That “WRAPPED” tickles the idea that it could be a tours but, apart that…

Frustrating. I haven’t got an original idea!

Well, that’s the boost for eventually make it way much better than Wren did, right?

Oh, BTW: thanks for pointing it out, @Autinn!

EDITED: I am playing with Wren right now. It’s pretty far from what I have in mind. This one don’t use colors, for istance, to eventually modulate extra stuffs like FM or pitch but on the other hand it allows to draw directly on the grid, something I totally forgot. Meh.

The right click to save the cell state is pretty rad.

Have you looked at JW’s NoteSeq?

" Life Switch: when switched to the right this turns on conway’s game of life"

Thanks for the indication, anyway… I’m going to play with it a little.

I’m the king of the “second hand ideas”!
Thanks for the tutorial, @LarsBjerregaard

Meh, two things that module is missing, tho, are

And, the most important thing in Life: the world is not a torus!!! The cells literally splat on the borders of the world. This mean (and I have tested it) that very likely it lead to either a stable and boring configuration of “stable” group of cells or the death of the whole thing with no living cells.

Instead, on a toroidal world, things like gliders, generators and such can live and breed indefinitely and considering how the module is made it can lead to very interesting result!

So I guess my ideas can improve a little this good plugin! I have to write to the author!

I am 100% going to use this in a stream later on today. It annoys me because I have used that module and have implemented the game of life myself (many years ago) and whenever i see a grid based module like that it’s the first thing i think of. Wish I’d noticed the switch!

And, the most important thing in Life: the world is not a torus!!! The cells literally splat on the borders of the world. This mean (and I have tested it) that very likely it lead to either a stable and boring configuration of “stable” group of cells or the death of the whole thing with no living cells.

This can happen whether the world wraps around or not.

Cool. I’ll be off running DnD today so I probably won’t catch your stream live. But I’ll check out the VOD later.

Actually I’ve just tried it off-stream and I’m not convinced that It’ will be particularly interesting. I’ll see what i can make of it

expires in 14 days (unless i download or highlight it)
Edit: the vod is gone

True, but if the cells splat on the borders they always (100%) of the times either die or converge to a stable configuration. That’s the issue I am talking about and that, talking about sounds, produce either a boring, predictable sound (no matter where you get it from, middle, top, bottom or random) or silence.
To be fair, my idea was to produce a sound even in the event of the death of a cell but my doubt was in case of an oscillator like the flipflop: it would made no difference because it would always be a totally regular and repetitive pattern.

In a toroidal world the probability is not 100% since, for istance, a glider is free to roam indefinitely and the cells have a virtually infinite space where reproduce.

I hope I made myself a little bit more clear.

either die or converge to a stable configuration

That’s true for all finite state machines with finite memory, regardless of the rules of boundary conditions

I hope I made myself a little bit more clear.

I think i get what you mean. It would definately be cool if the noteseq allowed wrapping of it’s life simulation (and if it supported multiple cv settable patterns i’d never use the RCM piano roll, noteseq would just be superior).

Honestly I cannot reply on that. What I know as per my experience is that the behaviour of the cells in Life CA (there must even be a ruleset, I have to dig into it) in a toroid world can lead to a moving group of cells known as glider.

I totally agree that this is another stable configuration but I think that this is a little bit far from what I was pointing at (or is it?); you can test it on the module.

If you play a glider (or a glider creator, check the links I have put to see what I am talking about) in the module you obtain far more random and interesting sounds rather than if you play a block.

And, accordingly to the researches of Richard F. Voss and John Clarke, despite the “glider in a toroid world” is (taken by itself with nothing added to it) pretty boring being pretty predictable, it is undoubtly better than the sounds created by the block!

Hence my proposal of a toroid world for the module and the use of colors.

Also, I cannot stress this enough, having the possibility to save and load the states of the CA, allows to load preconfigured states from all over the web; there are gazillions of people who have draw amazing things with Life, it would be absolutely nice if it could be possible just to load them rather than draw them by hand. And most of the times, the save files are *.txt or *.csv files.

I’d forgotten until just now that there’s a module by qwelk that does a kind of one dimensional life simulation. It’s called “Chaos”.

Me, on the onther hand, had totally forgot the forum. Facebook is pretty intoxicating. The plugin you mentioned is amazing! Thanks for the suggestioin, @dag2099!

Great minds think alike! I’ve actually done work on implementing Langton’s Ant in VCV Rack as my first Rack module. Finding this post has inspired me to re-engage with the project. In all honesty it has been gathering dust for the last six months.

Also, good call PaulPiko! I actually lifted parts of Jeremy Wen’s NoteSeq for this project (with attribution of course). Below is a screenshot of early development. I’m calling it Aunty Langton’s Musical Ant. 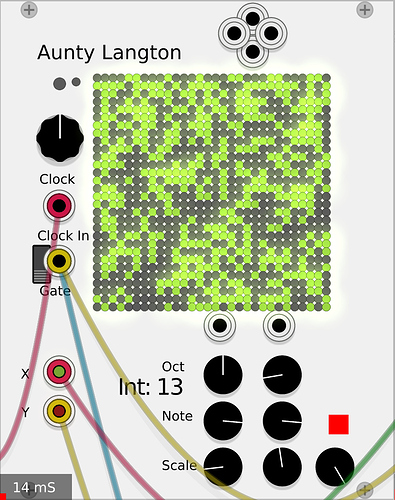 I’ve actually got a video catpure of it in action too. I’ll add a link to a youtube vid shortly.

Thanks for spurring me back into action on this! The implementation is mostly complete, at least for a first release. Now to properly design the panel so it’s not so goddamn ugly