How do I patch multiple signals into one input?

But I’m not new to synths! It seems a lot of the beginner tutorials on youtube are also assuming you’re a beginner to synths and it’s like…okay I know what a sine wave sounds like and I know what filters and envelopes and LFOs are just show me how to PATCH THINGS

Anyway. My main noob question is how do I patch multiple modulations into one CV input? (trying to use the correct terminology here). For instance, using the core pack, I want the PWM of the VCO to be modulated both by an LFO and an ADSR, but it doesn’t seem like I can drag more than one cable to the PWM CV. Is there a button combo I’m missing? Is there some weird modular workaround?

Welcome to the forum…

Anyway. My main noob question is how do I patch multiple modulations into one CV input?

You can’t, inputs only except 1 connection. Outputs can have many cables, from the output. You could sum LFO and an ADSR but it will add the values together.

note: that when the lfo has a value of 5v. It adds the max values of both, you could counter this with offsets like the befaco dual atenuverter

There may be something in the beginners guide here, worth a look through anyway…

If you’re just getting started with VCV Rack, this post is for you! It aims to be a quality list of links to videos and articles, that will help you get Rack installed, make some sound, introduce you to the basic modules and get you through your first couple of patches, until you can start the exploration for yourself. I will aim to curate it on a semi-regular basis. The basic links - VCV Rack website: https://vcvrack.com/ The manual: https://vcvrack.com/manual/ The plugin manager, to inst…

For instance, using the core pack, I want the PWM of the VCO to be modulated both by an LFO and an ADSR, but it doesn’t seem like I can drag more than one cable to the PWM CV. Is there a button combo I’m missing?

As Phil said, you need to combine the LFO and ADSR into the envelope you want, then send that into the input. Here’s a possible way to do it with core modules. Depending on the effect you want to achieve, there may be another way to do it.

Thanks for the help.

Let’s say I want a filter affected both by an envelope and an LFO. Would an easy way to do this be to set up an ADSR modulating the CV of one filter, then have the output of that filter go into another filter, and have an LFO modulating that one? Does that make sense?

Does that make sense?

Depends on the sound you’re trying to get. Do you have an example?

No but I know the sound I want…I want a filter to be open and then close and as it’s closing I want it to wobble. Aka (for example) a long decay, low sustain, with an LFO sent to the filter as well. Literally every synth I’ve used has had both the ADSR and the LFO patched to the filter. I’m just trying to figure out the best way to do that in modular land

For instance, I have an oscillator. I would like for this oscillator to not be making sound all the time. So does that mean I need some sort of VCA? I can’t just go from MIDI v/oct to an ADSR to the oscillator, right? Basic patching stuff like this boggles my mind and I can’t wrap my head around it…

Well if you filter an ADSR you will probably filter all the modulation out of it. Low Frequency stuff resides here, LFO’s/Triggers etc…

If you mean the audio, then yes this could be another way around it though if the first filter has already filtered audio out there will be nothing to modulate. Depends on the chain, probably go ADSR first (depending on how snappy) then LFO or separated filters HP / LP (vice-versa).

You could also attenuate an ADSR and LFO by sending to a mixer and get desired levels.

Omri Cohen has made some nice beginner videos. Maybe have a look at these first…

All I want is an LFO and an ADSR patched to one filter–which apparently isn’t possible in Modular land. So what’s the easiest, most straightforward way to achieve this result?

I’m loving everything else about modular so far except for this funny quirk. Idk how nearly every synth in existence has these two modulation generators patched to one thing but for some reason it’s not possible in modular. It’s kinda baffling to me lol.

Probably wants an envelope like this applied to the cuttoff?

EDIT: Except that I want those peaks to get smaller and smaller because if the cutoff frequency is getting lower, but the LFO is modulating at the same amount…

Idk how nearly every synth in existence has these two modulation generators patched to one thing but for some reason it’s not possible in modular.

I must say I cannot follow what you are exactly trying to achieve. Maybe you can describe how you would do that on every other synth. 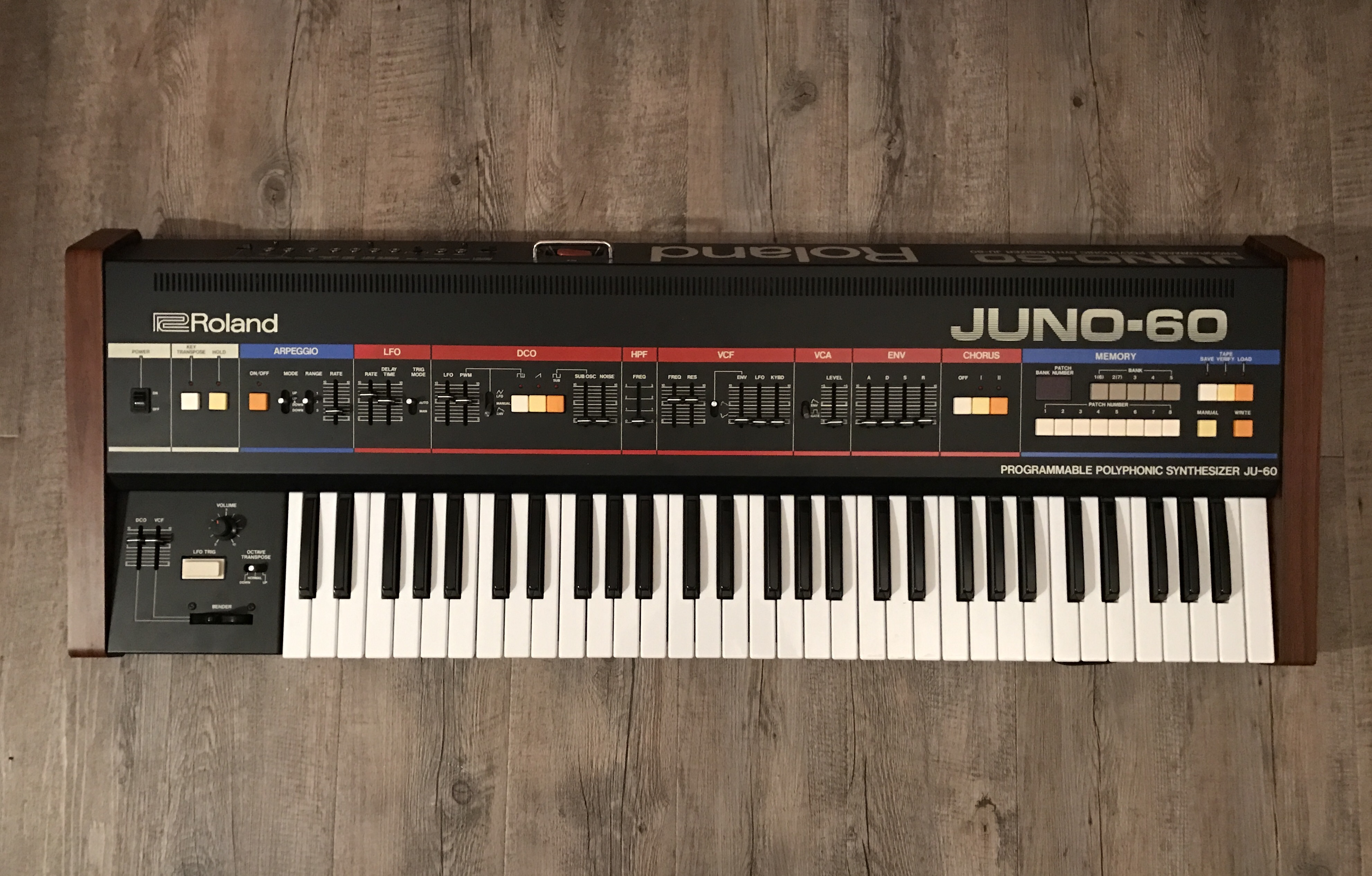 Every single synth I’ve ever played has had this feature. On my desk there sits a Behringer K2–a clone of the Korg MS20. Under cutoff frequency modulation you have two knobs: One for LFO and one for envelope generator…But I can’t do this in modular

Patch the output of the ADSR to an VCA or any attenuator and from there to the filter CV. ENV amount in nothing more than an attenuator.

But I also want the LFO to affect the same Filter CV!

It’s almost like I need a filter module that has two CV inputs for the frequency. Does such a thing exist?

I started building a patch to help explain modular synths/VCV Rack to someone who has only had experience with simple keyboard synths. It’s a work in progress, but I thought I’d share it to get some feedback/suggestions. And others here might find it useful. I think I have the basics, but my music creation experience is limited to VCV Rack, not monosynths or keyboards. Once I’m happy that the patch is “finished” I will make a tutorial video. The patch features: Two main oscillators and one su… 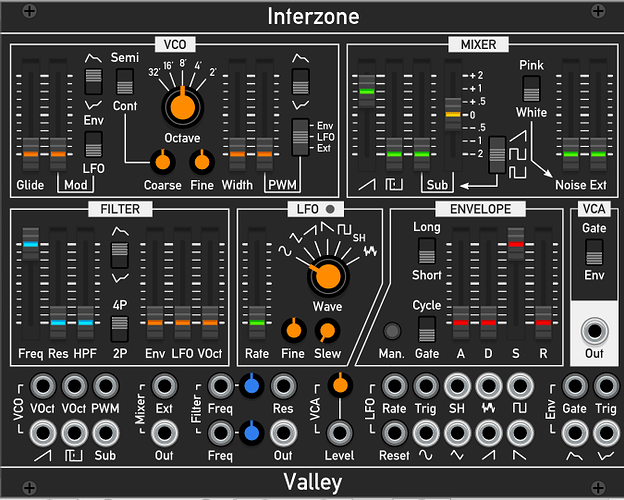 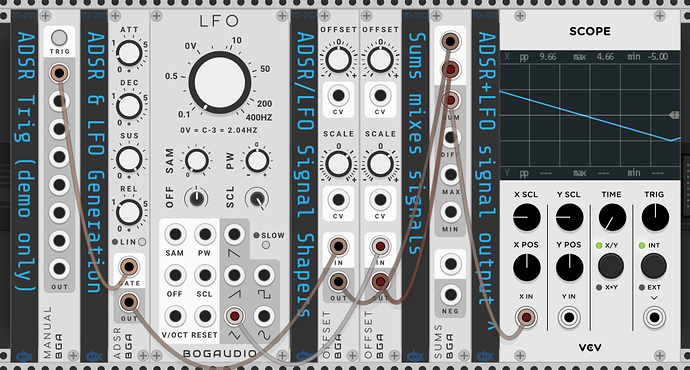