The wrapper code will be released in the VCV Prototype project which is GPLv3+ licensed, so you can rip out whatever you need and develop your own module with it. Or you can use libpd from scratch, using the VCV Prototype code as a reference/example of usage.

It looks like the project is funded! The project is now in the developers’ hands. Further donations will be appreciated by them and will be used for additional bug reports and feature requests.

Whooho, amazing! What a community this is, incredible.

There is an outstanding issue in libpd itself which will prevent messages being sent back to the host to be distinguished from which libpd it is coming. Until that is fixed (probably soon) we might have to disable multiple instances of the Prototype module in one Rack.

There really should be a fundraiser for Dan, who is doing all this heavy work on libpd! We have asked him to review our code for the VCV Prototype module for a share of our fundraiser, he politely declined the money but will look over our implementation anyways, so kudos to Dan Wilcox and also to Peter Brinkmann, the author of libpd (and Miller Puckette obviously).

Exactly that’s the concept. (See my other post with the caveat though.)

I have an Idea, maybe @Vortico can tell if that’s all right with him: We could offer a stretch-goal of 1100$ and would additionally implement our physical modelling snare drum as VCV module with the libpd engine in GPLv3+.

That module could serve as a boilerplate for your own modules (again, the caveat of the pending multi-instance support).

YAIIII! Super happy, only 9 hours of crowdfunding and, voilà, that’s it!
I am so happy, that I made my mind to lay down a quick screen recording, and I am no longer ashamed to share the terrific (= horrible) PD proto-module I tried to code a few months ago, before giving up with any further attempts at it. I just mentioned it in this thread:

A PureData bridge-type module, capable of opening and playing PD patches via the embeddable libpd library. I was experimenting at something sort of it when VCV Rack was still at its 0.6 incarnation. Basically I heavily based my experiments on a indirect porting the ofxPd addon for openFrameworks by Dan Wilcox in the context of Rack, that is, consuming the libpd_wrapper API through an extension of the PdBase class in the context of the Rack module instance. I managed to have the audio stream bu…

I post it here because it gives a quick idea of the interaction with a PD patch, and specifically because is partly a live demo to answer the question asked by @David, about Automatonism.


Everyone is free to laugh at the super fuzzy panel, it had to be a porting of the pitch-shifter sample coded by Dan Wilcox for his ofxPd add-on to OpenFrameworks. But soon, it rather became a playground for opening/playing PureData patches. Anyway, I am not good enough at C++ to proficiently solve all issues arising by such a task.

Last thing, sorry, at minute 02:50 I get lost with the multiple windows in the little screen-estate area of my laptop, then you can hear no audio until minute 03:40, when I finally ride the mixer levels up. I had no time to replay or rework it.

Now I can cheer like a madman for our developers, it looks another of my Rack-related dreams is coming true! 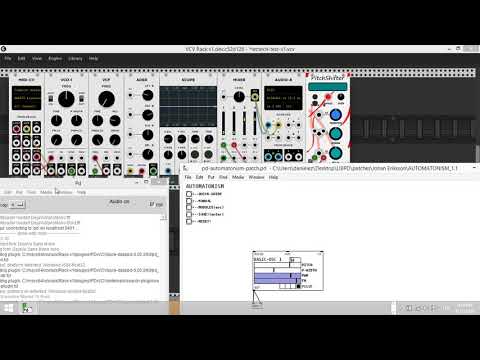 I don’t feel like escrowing that. IMO libpd embedded in modules for non-prototyping purposes isn’t a good direction for Rack plugins, so I don’t personally support that.

Yes, it will be possible…but not any patches using Purr Data since it is only 32 bits and is an extended version. You can also run patches from ARGOPd (http://gerard.paresys.free.fr/ARGOPd/) but you will need to install the required librairies…

Just as a data point, my post about the Pure Data fund raiser in the Pure Data public Facebook group got 150 likes in two days, as well as several comments saying people contributed. Lots of excitement for this!

Done! some extra bucks to be a part of it

really excited for this - i moved from puredata to touchdesigner for visual work some time ago, and VCV has reinvigorated my audio experimentation in a way i haven’t felt since my puredata days. the idea of using some old patches to “fill in the blanks” of some VCV modules i wish i had is perfect. glad i caught the tail end of the fundraiser cause i only just found out about it. i’m assuming it’s only vanilla pd patches also?

Technically it should be possible to use externals as well, if you put them somewhere libpd will find them.

Oh, wow just saw the meter stands at $900. This is an amazing community! We’re already getting sound out, but it’s distorted, so Clemens is fixing bugs now, but looks promising already! 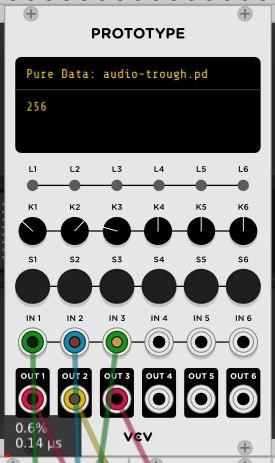 Any news from the development team? Hope all is going great!

I’ve seen some commits on the vcv-prototype repo (and you can too if you “watch” it), and there has been some discussions as well.

it’s underway, but I don’t know the final timelines as I’m just observing/commenting

Until we get news, what’s everyone excited to do with PD? I have never used it, so I don’t know in detail all it’s capable of. What would you do with it in the rack first?

Oh, sorry I did not check back in the forum.

The news is: We’re done

There is an open merge request on github!