@auretvh Oh thank goodness!! I was really worried about it.

Great tip! Even with this trick it’s still 32 clicks to open all the submenus for both options on 16 channels, so some faster method would be helpful

I know you’re still working on the sample groovebox, but have you considered making an ER1-style synthesis based version in the future? Instead of sampler tracks, there could be a synthesis engine w/ an oscillator, pitch envelope, multimode modulator/lfo, and amp envelope.

Originally, my intentions for the groovebox was to support multiple “engines”, where each engine was a different type of synthesis. I had planned on there being a sample-based engine, FM synthesis, subtractive synthesis, speech engine, circuit-bent speak-and-spell engine (??), etc.

As I started to design this “everything” groovebox, the complexity of the user experience was worrying me. I decided to simplify and focus on sample playback. At that time, the interface was quite tedious and different from what it is now. I thought to myself: “Ok, Bret (me). If we are going to get this done, we’ve got to simplify the concept.” So I focused on sample playback.

In the short term, I’ve been revisiting my existing modules and making general improvements. You heard it here first: Both the wavbank and ghosts modules are getting proper 1v/octave response in the next release! Woo hoo! (Also, ridiculous of me to make such a big deal about that! Ha ha ha.)

I’m going through all of my code, line by line, and tidying up before moving on to new modules. My next planned module has been the “autobreak studio”, but it’s not 100%.

@officialdjglitch Can you tell me more about what you’d like to see?

Revisiting the older modules is definitely great news, especially after the complexity and huge user input of the Groovebox, it might be refreshing to see how solid the old ones still are and where they need slight workflow improvements.

I’m going through all of my code, line by line, any tidying up before moving on to new modules. My next planned module has been the “autobreak studio”, but it’s not 100%.

…and if you happen to get bored of reading your old code you still have some low-hanging-fruits. Some refreshing and new project but not too demanding.

@FiroLFO Ha ha ha. I totally forgot about that!! I’ll see if I can shuffle that in. I may have time in the next few weeks.

Sounds cool, take your time with tidying up your code!

My idea consists of a sort of souped-up Electribe ER-1: An oscillator with a pitch envelope and a multimode LFO/Noise modulator capable of audio rate modulation, which then goes through a drum amp envelope. There maybe could be some sort of wavefolder for some extra sound shaping, and a delay like in the original groovebox.

It’d be really cool to have something like that with the Groovebox sequencer, and I’m sure the parameter set would be simple enough to support it.

Either of these could slot into the sequencer code pretty well, I’d imagine.

One option I was thinking of creating was a sequencer-only style, where the parameter locks would be generic (not named) and would have individual outputs.

Might be interesting as well. It’d be even more fun with some better percussion modules to pair it with.

Great tip! Even with this trick it’s still 32 clicks to open all the submenus for both options on 16 channels, so some faster method would be helpful

I’ve got some good news for you! I’ve implemented your request and it will roll out with the next update. 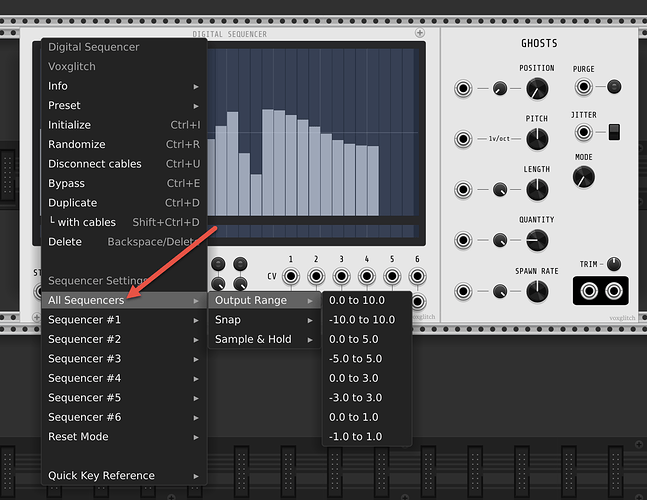 Oh, for Digital Sequencer only right now. But I should have DS XP updated by the next release with this as well.