First, many thanks to the creators of the VCV Rack! Now i have a tool that can help me to start learning music. It is not easiest way to start with a synthesizer, but it’s very funny to create and play with a patch. So many possibilities…

The patch “MetallicDrops1” consist only of some fundamental modules. It creates a metallic sound with a random tone sequence. It has no random module nor a sequencer involved. The way to produce random or chaos seems to simply connect some outputs with some inputs mainly using VCO’s and VFO’s. 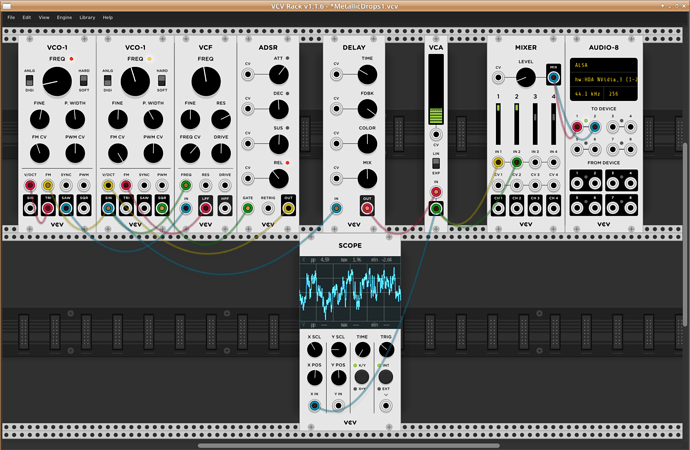 Really interesting how much the Delay adds to the sound.

This patch sounds like a cooking liquid with a metallic part in it. It’s similar to my previous patch metallic_drops1. At best grab it and play with the knobs 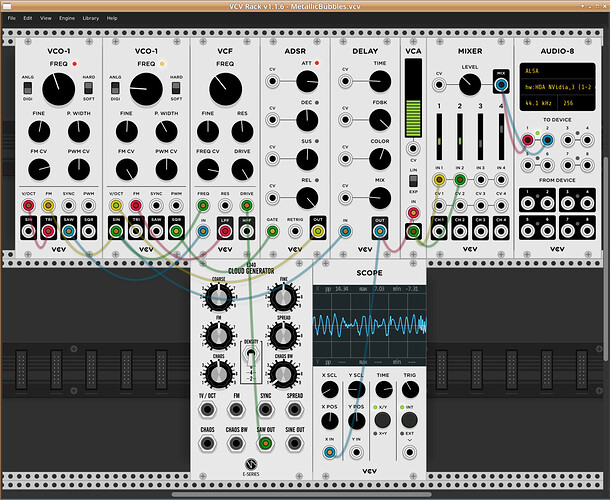 Oh i like to play… So i found another self generating patch sounding like a mixture of a monochord and a gong feeded by a noise and a random modul. Question: Which ways are possible to add a melody to it? Thank you 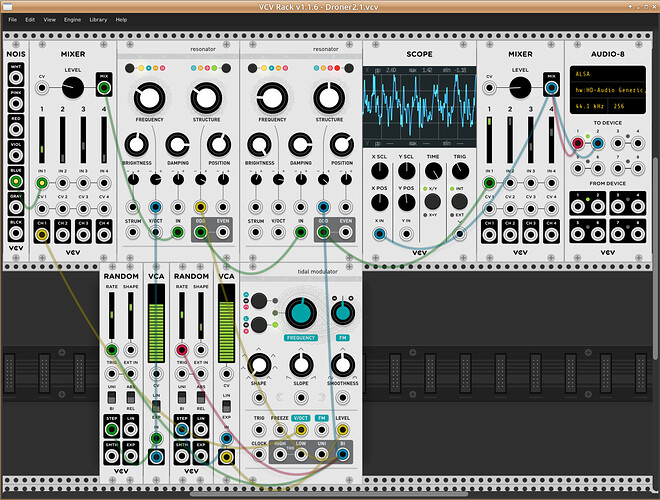 Hi again, now i like to introduce the very first concert of *** Jorge the

(vocal) ***
If you don’t like harmonic and calm sounds, then this is right for you 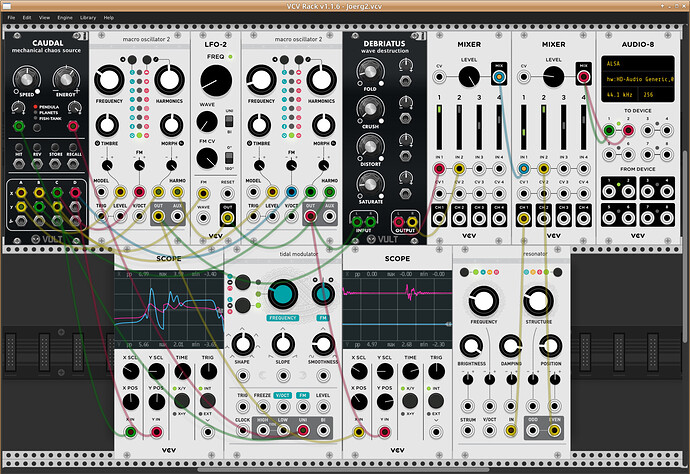 Dear Omri Cohen, many thanks for your very helpful videos on YT. This patch based on your video about the Karplan technique here: Karplan 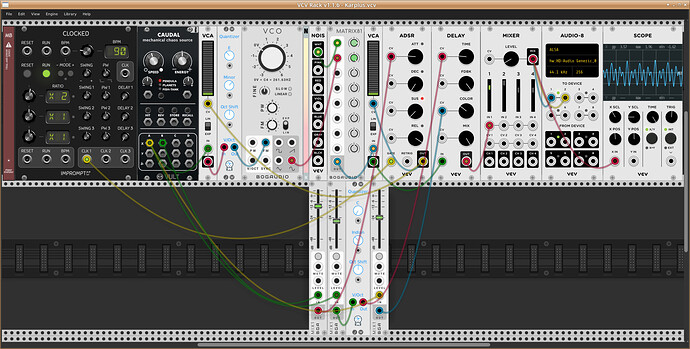 You might want investigate the Audible Instruments Resonator and its audio input at some point for that kind of “exciter” stuff.

They way you’ve used the output of the quanitizer into the CV input of the time parameter on the delay is fascinating. Good stuff!

To hear a cat purring was always a pleasure for me. It helps to feel so calm and relaxed and most important peaceful. It’s music in my ears…

Here’s the patch for your pleasure, but turn the knobs carefully 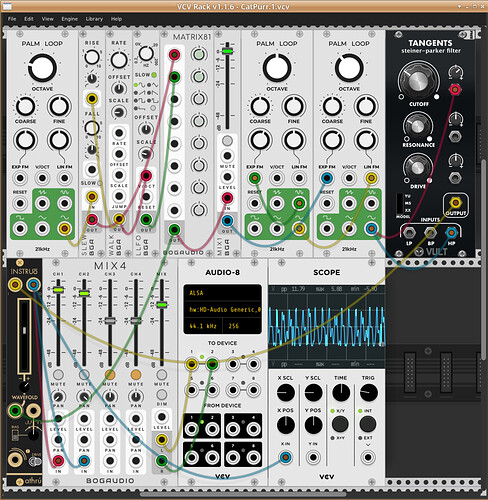 Thanks! I am learning so much from the folks here.

I made a purr for for a generative patch for foster kittens and the people who care for them (an experiment) but yours is SO much more convincing. I’ll let you know if it really works to comfort the kittens.

The first time I had ever even seen a synthesizer in real life was an ARP 2600P, and I had it on loan for a whole weekend (in the early '70s) to mess around with, after only a very brief tutorial on the principles of operation. On the second evening, my future wife said “I bet it doesn’t purr like Mao here”, Mao being my roommate’s Siamese cat. In about 15 minutes I had a very convincing purr coming out of the ARP, which impressed her mightily.

Thanks, now i know that the purring sounds not too much artificial. And it’s nice to know that my work will hopefully help some poor kittens

Cool ! Our cats have sharpened their ears

I didn’t learn to play a didgeridoo and know the sound only from hearing. So i’m lucky to be able to build a patch that sounds hopefully similar to the original instrument. The VCO from Instruo is a realy nice device because it has two wavefolders that creates the magic 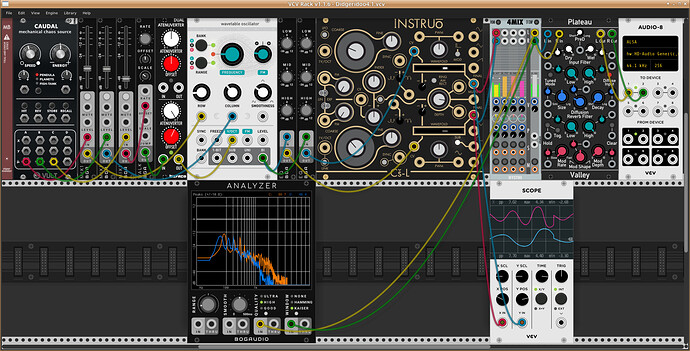 creating human voices is not an easy task. Fortunaly there are modules like the Vox Inhumana from Frozen Wasteland that can create vocal sounds. Modulation is the key to create the character of a voice. Without modulation it’ll sound like an oscillator of some kind. So here i post my first larger patch that represent my skill level i reached until now. Again, without the great manuals by Omri Cohen i were lost…

Link to the wave table i load into the bottom right Terrorform: Download 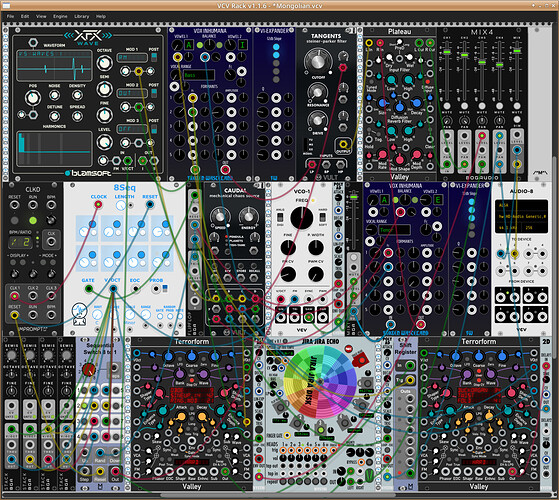 Watching that video was an eye opener to me

or should i say ear opener ? 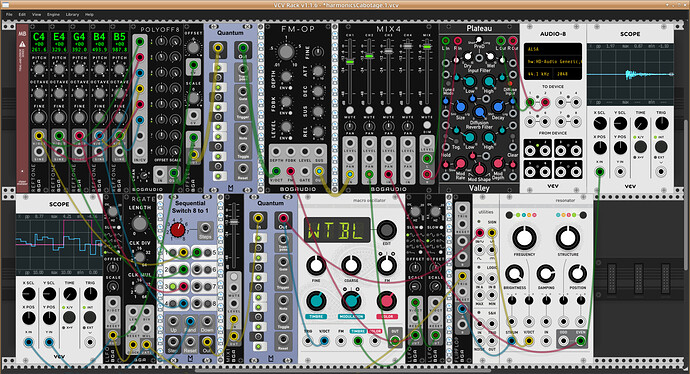 this time the sound source is a png picture file. The modul liMonADe converts a png file into a wavetable! So i can make music with my own painted pictures! And not enough: The modul Grains of Wrath does an excellent job creating granular variation rich wave chunks using sound or wave files. Very inspiring noises! 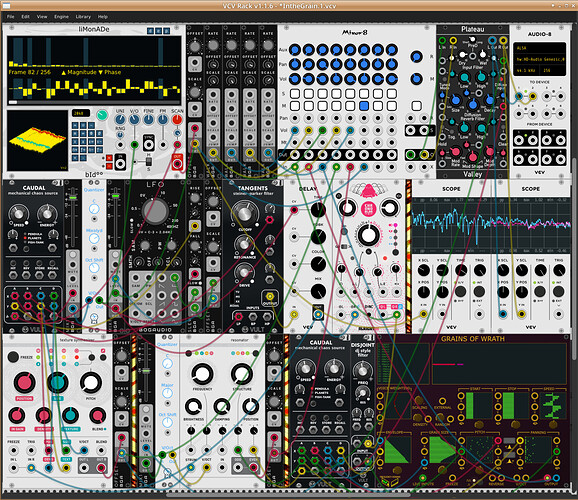