So what hardware do you use with Rack?

, so i was wondering, what do you guys use ?

For my part, i sometimes use a Arturia Beatstep, for hands on modulation and sequencing.
Also i really like to process intruments with Rack. I love to plug my electric guitar, and build some crazy “pedalboard” in Rack

I also tried once with a piano, and also with a Yamaha reface cp i have lying around

Next, i plan to get a Microfreak and play with it in Rack, but it’s so hard to put your hands on one here in Paris

I’ll have to wait some more time.

So guys, up to you to reply with your setup now if you feel like sharing that

3 Likes
Favourite Hardware to use with vcv rack?
What midi Controller/Keyboard are you using?
pfig (Pedro Figueiredo) May 11, 2019, 9:38am #2

For actually interfacing with rack, I just route functions to knobs on the master keyboard (Studiologic VMK-188+), and I don’t even do that much.
When actually making songs, there’s always a track or two from the Moog Slim Phatty, and often some Bass Station 2, Minibrute and Alesis Andromeda, plus some excellent VSTi’s such as Zebra, Serum, Strobe, Cypher and any real recordings.

I purchased the midi fighter twister a few months back. It’s nice to be able to customise the LED colours so you know what’s controlling what. I also find the 4x4 grid nice to work with and the encoders can be set to bi, unipolar or. push switches. The encoders feel amazing, rubber with just the right amount of resistance, it’s built to last and the small unit takes up hardly any space on my desk.
It has helped me be more expressive with the rack, I’m interested in delays and looping trying to find my own space in the place between the notes. I never had the sort control I needed with a mouse I just felt disconnected with what I was doing, trapped in a grid if that makes sense.
The only down side is that I now have a mother 32 and a strymon volante on order to continue my delay experiments.

I totally agree, having some knobs really opens a new dimension to Vcv rack.
Also, if you enjoy delay experiments i can suggest the Valhalla delay

Just checked the Valhalla demo, haven’t spent any time with it but it does indeed sound great!

Not really the rout I want to take though, I want a nice little shiny box on my desk that I can grow even older with

To add my own dents, dings and scratches to and fill it with memories.
I just don’t get that with software outside of Vcv Rack. There is something about the rack environment that captures my imagination and holds my attention.

I thought about getting the magneto and beginning the eurorack journey, hence getting the mother 32, but just now the expense is beyond me, but at least the options there if I win the lottery one day and I can use the pedals with lots of other instruments

I have an electronic Kalimba that is crying out for delay and spring reverb.

Anyway good luck with the searching for a controller, it took me a while to decide with all the choice out there.

Anyway good luck with the searching for a controller, it took me a while to decide with all the choice out there.

At first it was a bit hard to use the beatstep

but now i really love it and don’t want to change, and whenever i need keys, i just plug the midi out of my piano( guess i’ll use the microfreak now once i get it ).

Anyway, the objective of this thread is indeed to give some people ideas of hardware to use with Vcv rack,
There is so much more once you have a few knobs and external sound sources ! The infinite playground that Vcv rack alone already is gets even bigger !

I use the BeatStep Pro, Keystep, O-Coast, Neutron, and since today also a Eurorack case with Morphagene and some utilities for now and some Midilar Midi modules. I think that the tactile experience is essential, for me at least, and it’s so much fun being able to concentrate on the music\sounds without having to look at the screen even.
I use the BSP as the master clock, sending Midi to VCV Rack and also to the Keystep so everything is synced with the BSP. The O-Coast I send directly to my audio interface, and the Neutron is mounted in the case so it’s going together with the Morphagene through a mixer to the interface.
I’ve started experimenting with a fixed rack in VCV so I have a bunch of modules I use usually in VCV like the Wave oscillator, FM-OP, all the Geodesics, some Vult magic, and so on.
I really hope that VCV 1.0 will come out soon so I could also send Midi out of VCV…
By the way, I also have some Midilar Midi modules mounted in my case, so I can control all sorts of stuff in VCV like mixer, filter, delay, and such.

So nice to hear you got yourself a Eurorack case ! I’m looking forward to seeing it

I guess i will soon experiment with a fixed rack too, so one day, when i build a Eurorack, i’ll know what to get

but that will be in a while

Also I am very excited for 1.0 ! Can’t wait to build proper Polysynths with the Polyphonic cables !

Thank you for sharing your setup Omri

Yeah, I just got me one, still have to develop it a bit… those things take time I guess

I’ve been looking at a magneto for a while too. I think that it would pair well with a Minibrute 2, and be a nice pathway into hardware modular.
In terms of other hardware with rack, an audio interface and my sax or oboe works well and produce some crazy sounds. Also quite fun to use are tape loops, or some modded toy keyboards

I have a setup similar to yours, Omri, minus the 0-Coast, BeatStep and the real Eurorack. Instead of the Midilar, I have a BCR2000 for the tactile twiddling of Rack knobs. I would like to make a fixed VCV Rack, too. I love twiddling with the Neutron, but I think I have no chance of getting anywhere substantial with Rack itself if I am setting it up from scratch every time. I had a default rack that included mixing and effects but it was overly complicated. I would like to pick just enough modules to fit on my 1920x1080 screen. I don’t know why it is so hard to do so … practically everything seems semi-essential.

I was also considering using the KeyStep as a master clock. Do you experience latency in Rack when it is clocked to the BeatStep. I was wondering if I would experience phasing if the Neutron and Rack were playing in unison.

Well, about the fixed rack, AP modules have an HP meter, so you can set your rack to be similar to Eurorack size. I have mine at 9U 104HP, but without the Midi modules. Try zooming in so you have 2 rows or 3 and add some modules and see what happens.
About the Keystep, you can send the actual clock output to your sound interface and from there to Clocked from Impromptu. It will be very stable. I’m using also the BSP and send Midi to VCV, and I noticed that when using Midi with an Analog clock, things will not be synced because of the Midi latency so I’m using the drum sequencer of the BSP as my clock. I just set the sequence I want as my clock division\multiplication and send it to whatever I want to run, sequencers, drums, s&h, and so on. I’m hoping to make a video about my setup after VCV 1.0 comes out.

I’ve got an Akai mpd32 and Launchpad mk2 that I’m trying to incorporarte into my workflow but with no midi feedback the launchpad isn’t that useful and the mpd32 device isn’t remembered by the midi cc and trig modules, I have to select it each time I load the patch and after having set up a template for the whole of the controller it’s a hassle to do this each time.

The lack of feedback issue for the launchpad got me thinking how good it would be to have some kind of controller template function similar to ableton’s blue hand or renoise’s duplex. It would be amazing to have sequencer steps shown on the launchpad, similar to the white module I’ve seen on some rack setups. Selecting a different module and having the main controls automapped would be incredible.

I’ve resisted scaling the Rack down because I can barely read labels as it is, but you’re right, at 85%, three rows fit perfectly on my monitor both vertically and horizontally. Surely that is enough room for a decently flexible setup. A real Eurorack that large would set you back ten grand in US dollars.

A real Eurorack that large would set you back ten grand in US dollars.

Also i want to be sure i’m used to make the most out of a fixed rack, and i’m not realy sure about modules i want.
I know for sure i’ll get ‘‘small’’ versions of some modules(like clouds) to maximise space available and also lots of utilities and versatile modules.
But for the rest, i still have to build ‘’ my modular personality ‘’

Just taking a quick highly unscientific look at prices on Modular Grid, it looks like you can count on about $30 per hp.

I know Eurorack is supposed to bring modular synthesis to the masses, but it still seems to be pretty much a rich man’s (or woman’s) game to me.

Andrew said this will be fixed in Rack v1.0.

Anybody got one of these? 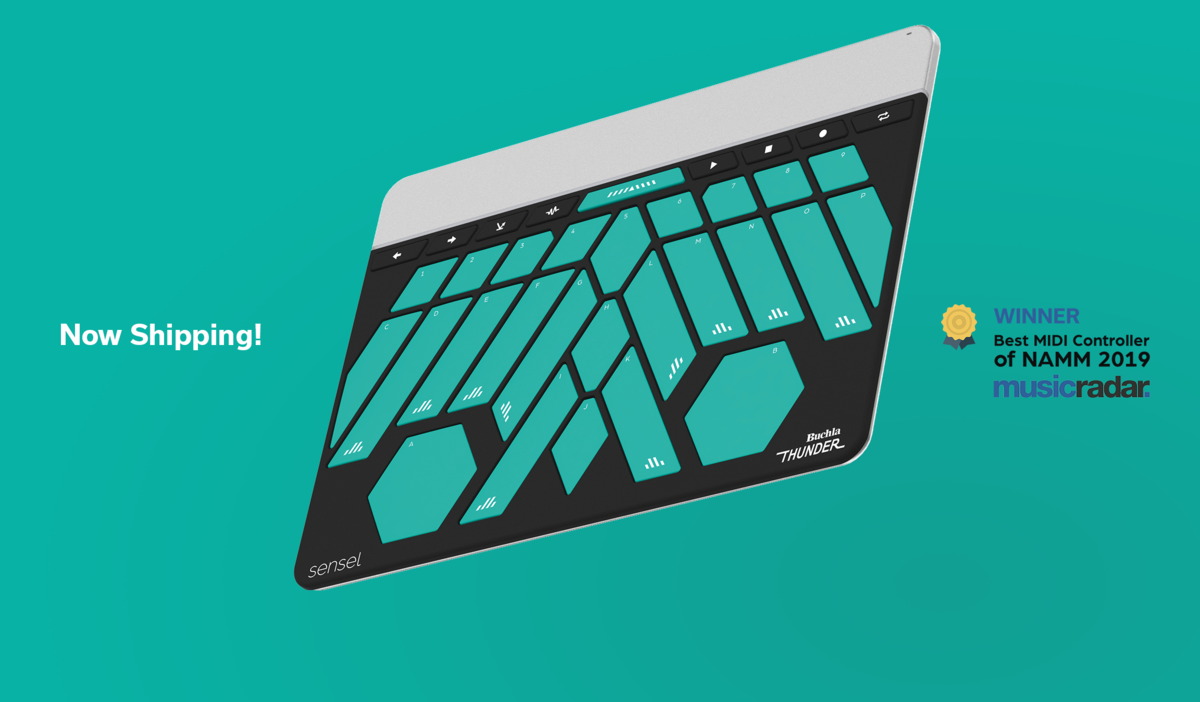 A legendary expressive controller comes to the Sensel Morph in an exclusive new partnership with Buchla. Native support for MIDI, MPE, and more!

Very interested once there is a UK or European dealer.

Probably $10-20/hp for most stuff but yeah, pretty close.