Hi, I’m new to VCV Rack and I need to use it for a uni assignment.

I would like to set a percentage chance of a note playing in a melody. For example, 50% chance the first note it an E 50% chance it’s a C.

Any help would be greatly appreciated, cheers!

I think there is no easy way of doing this in Rack… You might be able to set something up using Bernoulli gates to trigger different notes… don’t have a better idea right now… but:

There is this module by Aria Salvatrice, which might be right for you

Branching 8-step sequencer taking a random path through its nodes

If you want to use it with Rack you have to run it in a different DAW and send MIDI to Rack with a virtual MIDI cable, or find a solution here:

Geodesics Entropia sequencer is a good 1-module solution for this.

The quantizers from Frozen Wasteland should do the trick as well. You can also do this with a switch that has a random trigger input and a couple of RefTone modules from BogAudio. For example, if you have a switch with 16 inputs and you connect the note C to 10 inputs, the note G to 4 inputs, and the note E to 2 inputs, there’s a higher chance that the note C will be chosen, and then the note G, and only then the note E. Does this make sense? 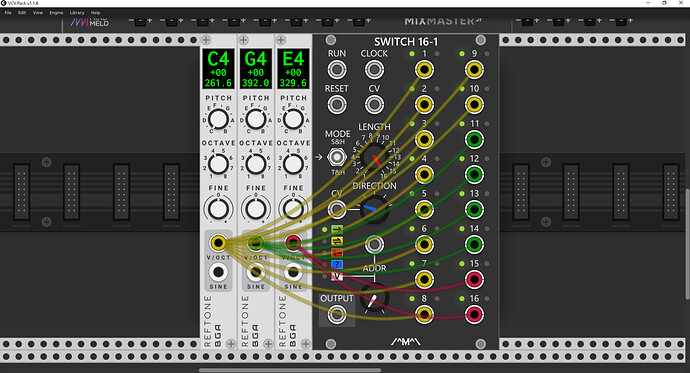 As Omri mentioned, this is actually very easily done in VCV 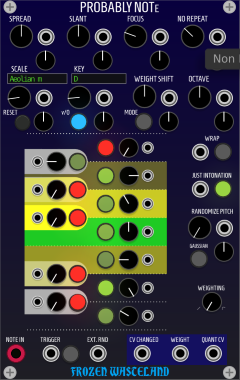 @ROGAVKA Totally forgot about that one, this is probably the best solution if you want a choice between 2 notes at every step @Omri_Cohen This is a very good idea! You still need one setup like this for every step of the sequence, though, so might get complicated quickly…

@almostEric This thing seems interesting. I haven’t used it yet but as I understand it you can’t really choose specific notes for each step

sure you can. It’s a quantizer so whatever you feed into the CV is going to be the root note. Then you can set the probability of the notes surrounding it.

more flexible and powerful than any of the other methods mentioned

ok, yes… but you would still need one for each step and let’s say I want it to decide between A2, D3 and E4, how would I do that?

if you notice, the probabilities of each note are under cv control

if the probability is 0, then it won’t be played

yes but you can’t leave the octave is what I mean… let’s say I set the root to D3 and activate A with a chance of 50%, will it play A2 or A3 or both of those randomly?

it will use the octave of what the note you sent in. The octave wrap button determines whether if the note goes “past” the scale if it should wrap around or continue up.

I encourage you to actually try it out

I think I get it, but in my example I couldn’t get A2 then, right?

yes, you can. Depending on either the Octave Wrap mode - and the actual Octave control.

Both of which have CV inputs

Or as mentioned, use the OCTAVE WRAP button

When I activate octave wrap I get A3 instead of A2, so if set up right you can get a lot of specific choices in a 2 octave range.

It is a great module and might be the best solution, depending on what the threadstarter specifically wants to do.

But it still has it’s limitations, my example with A2, D3 and E4 still seems impossible to me… lets say I just want it to choose between A2 and A3 just to make clear what I mean, how would I do that?

Don’t get me wrong, it’s a masterpiece, but it still does not allow every possible choice.

Regardless of your choice… keep this in mind as an easy way to move through up to 16 notes (or with 50/50 applied beforehand… 32) in various ways. just use it instead of a sequencer if you work with utility modules or similar.

In my opinion the coolest way to do this is using constant voltages and polyphony.

set up 2 of these (or the 8 channel one) and build the 2 sequences. use a small baseliner, put the 2 polycons in, set prob to 50 and output into the n1 poly switch. easy peasy lemon squeezy.

what is a big advantage when making your own CV-Sequencer, is that you can now use Gate Sequencers to control it. i.e.: use a 64 Step Gate Sequence to adjust your Sequence easily just by lighting a few buttons… 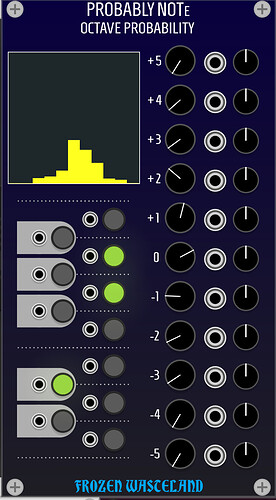 OK, in response to your post, this will be coming soon. It is an expander to Probably Note that allows you to (probabilistically) shift the octave on selected notes (all CV controllable of course)

In your case you would enable note “A” and then set the +1 to 100% (leaving all others at 0). This would leave all the notes generated by Probably Note at the original octave except the A.

You can choose the probability of each octave being selected. You can also chain these expanders so certain sets of notes can have one set of probabilities, and so on.

Question for alexlloydjames. Are you talking about writing 2 melodies, and then choosing a probability between the 2 notes? If yes, then here’s the most boring patch ever…but it will do what you want. I only set it up for 4 notes right now, cause I don’t want to continue it if this isn’t what you want.