Squinky Labs has released our 24th module, cleverly called “Organ Three”. It’s a Hammond-like organ plugin. While it is by no means a “Hammond emulator” or “Hammond clone”, it is in the same sonic universe. The UI and feature set are pretty close to the Hammond things.

We think it’s a fun and good sounding module. Aside from the obvious use of throwing some organ sound into your dance songs you can also get a lot of non-organ sounds out if it by adjusting attack and release, and controlling the harmonics (drawbars) with control voltages.

And for this release we are offering a special deal – Buy Organ Three and get the Surge Rotary (Leslie Emulator) for free! That a bad joke, of course. Both Squinky Labs and Surge plugins are free, but it’s still a really good sounding combination and we encourage you to try it.

Organ Three has got 144 VCOs and 32 ADSRs inside, but does not use too much CPU. It comes with a bunch of presets. There is (of course) a decent instruction manual also.

In the same update are several fixes to our old VCO EV-3. In version 1.0.10 we ported the MinBLEP code to the current VCV version, which should have been a small improvement. But instead we completely broke it. There are also some fixes to some older bugs – the PWM works better, and the DC offset has been banished from the Saw, Even, and Pulse waveforms. 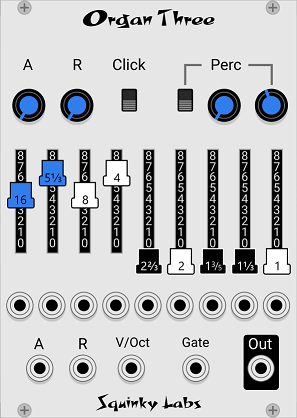 And send that through Slade for something smoother.

I didn’t think about that, I merged all the outs into a poly cable and ran it through another slew limiter and then split it again. But slade might have been less trouble.

Wooo, looks like a nice one Bruce, will try… Thank you!

i love the organ song and this one is definitively good

and its more easy to use than this patch : Hammond B3 emulation

thank you a lot !

maybe grey code should have a slewer built in? I’d like to revisit some of my whacky modules from long ago that are still a little popular… what would a super version of grey code or LFM do?

Wow, that’s a nice patch. But, yes, a lot of work. Probably more CPU also. Have you tried the (updated) Surge Rotary? I think it sounds really good, although there might be some features missing. @baconpaul is pretty open to feedback if you want anything more. My wish list for it? A way to turn off the distortion, and easier way to do the “speed up / slow down” thing (needs significant extra patching for that) . Of course that’s a very “organ specific” effect…

Very nice, much appreciated, thank you

You’re running this many oscillators on a lower CPU budget than most VCO use when idle, too.

The optimizations might make this impossible, but if it’s feasible, it’d be great to be able to output harmonics separately, to reproduce the main gimmick of one of my favorite synths.

Besides Surge’s, a while ago Andrew also demonstrated on Discord a nice way to use Sound Stage as a Leslie (I don’t think it was posted on the forums but it’s a simple matter of adding LFOs).

Edit: found it, may I repost the discord video URL @vortico ?

Oh, glad to hear all that. Hadn’t though of separate outs. Something you want to do that you can’t do with CV input on the individual drawbar volumes? I think if this module turns out to be popular I might make a larger one with more features or something.

Funny you should mention the CPU usage

As you know I made “demo vco” repo to (among other things) prove to people that is is easy to make a VCO that uses little CPU and has little distortion. So then I said “What could I make that uses a ton of VCOs?”. so…

Oh, sound stage - you reminded me I need to go buy that!

such a great module

such a great addition to the library

Thanks! It’s another oddball one (for a eurorack module). Glad people seem to like it.

Bruce, my deepest respect! I wish I had the DSP knowledge to create such lovely modules as you do

well, you more than make up for it in system level wizardry, or whatever it is that powers you!

I figured I’d put it to the test by adapting one of my old (very non-modular sounding) songs using a rock organ! I gave the organ a tad bit too much bite, and had to pull a few heroics to do it through Bridge, there’s an audio glitch halfaway in because of realtime rendering, but it should be inaudible in the mix.
(Also, uuh, don’t ask about the title of the song, it’s a reference to a very old videogame meme & the soundtrack I’m trying to pastiche).

With Organ Three being really CPU-efficient, I figured there’s no reason not to use three instances: two manuals and a pedalboard. The Leslie used is Reason’s (since I’m familiar with it). I’m not aiming for a realistic Hammond sound however, I’m treating it as a synth. 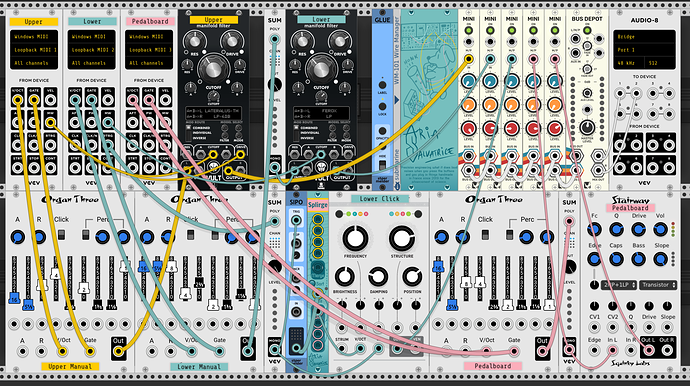