This thread is intended to track the development/announcements of the plugin KautenjaDSP Potato Chips, including ideas, complaints, bug fixes, beta versions, design documents, marketing, and etc.

SN76489 is an objectively awful name for a module. Even in development it took me several hours before I could quickly recall the name to type it out in my text editor. Meet Mega Tone, a model of the Texas Instruments SN76489 packed into just 10HP! New to this version of the module is: 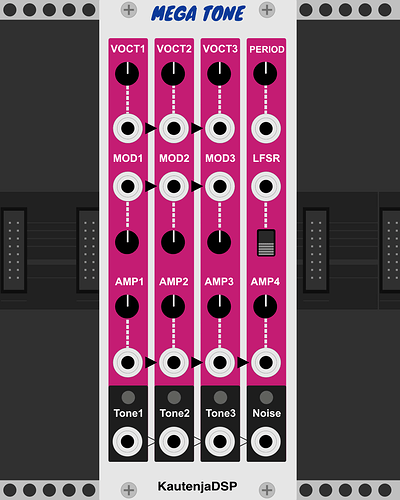 I don’t have compiled builds worked into my GitHub workflow yet, but you can grab the code here and compile it if you’d like to beta test this module. Be aware that there is a jumble of other WIP modules in the plugin. Feel free to explore, but don’t expect polished results from anything that doesn’t have a manual. If you’re not into beta software, feel free to check out a brief demo video on my Instagram here.

The name 2612 is almost as bad as SN76489. So, here is BOSS FIGHT, a semi-modular FM synthesizer with a ton of grit and character. It’s a model of the Yamaha YM2612, originally written by the MAME team. There are quite a few new things about this module compared to rev1, including:

This version removes the six internal voices, instead opting for VCV rack polyphony to provide polyphonic features. This allows BOSS FIGHT to require fewer CPU resources, at the expense of some grit and emulation accuracy. As such, existing patches that use 2612 will be broken. With some luck, the patches will break in a way that is sonically interesting!

I must confess that I am not a big fan of “chip-based” sounds BUT your last Boss Fight addition/mod is really huge success! Excellent module with very broad possibilities and nice sounds, thanx a lot!

I’m glad you like it! I’m also a huge fan of how it turned out in rev2

. In the near future I’ll be releasing MINI BOSS, which will be a single operator version (similar to SquinkyLabs KitchenSink and BogAudio FM-Op) that I’m excited about.

Version 1.8.3 is live on the VCV library and brings some pretty cool new features and improvements to the plugin. Firstly, the panels have all been re-worked and upgraded. IMO they look a lot better.

The biggest new feature is probably the integrated mixer on all multi-voice modules. Outputs are normalled in a daisy chain that allows the modules to act as mixers with internal VCAs. These mixers have a limited headroom, and can introduce hard-clipping and intentional aliasing. The subtle usage of aliasing really adds that dusty and bad sound that I’m looking for from these module. Other than that, I suppose all the normalling of input ports is new and pretty exciting because it means less clicking, fewer patch cables, etc.

Jairasullator has also been upgraded to introduce more features from the chip emulator. It can now be used as an oscillator, a synth voice, an envelope generator, an LFO, a noise generator, and a 4-bit DAC emulator depending on its configuration.

Boss Fight (2612) has also been re-worked from the ground up. More about that can be found in the posts above.

I’m currently wrapping up the final changes for version 1.9.0, which introduces three new modules based on emulations of the Sony S-SMP chip from the Super Nintendo Entertainment System (SNES). The three new modules allow for a fully chip-emulation based semi-modular synthesizer with modulation and effects! You can grab a compiled copy of Version 1.9.0 tonight when my build system finishes compiling it, or wait until it is available on the VCV library in a few days.

Super Echo emulates the echo effect from the S-SMP sound chip.The Echo effect of the S-SMP chip has 15 different delay levels of 16ms each, a 64KB echo buffer, an 8-tap FIR filter for shaping the sound of the echo, parameterized feedback, and parameterized dry / wet mix level. The echo buffer is stereo, although the echo parameters and coefficients of the FIR filter are the same for both channels.

Super Echo provides the key features of the echo module of the S-SMP chip, namely, 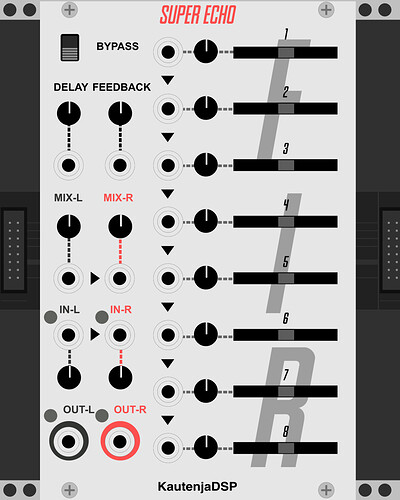 Super VCA provides the key features of the BRR filter and Gaussian filter of the S-SMP chip, namely, 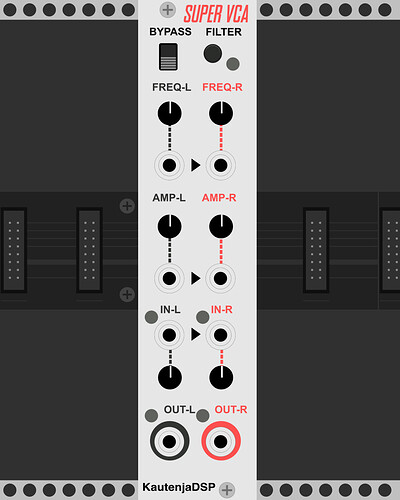 Super ADSR provides the key features of the ADSR envelope generator of the S-SMP chip, namely, 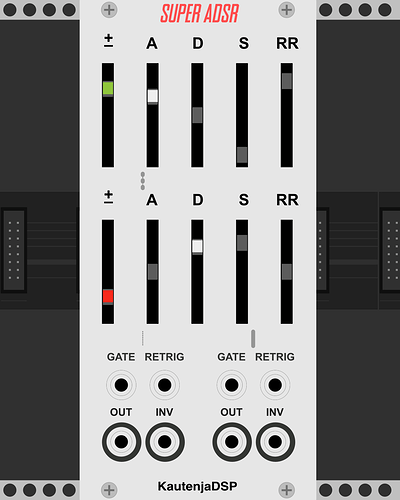 latest update to the modules/module redesign has caused many of my previous Kautenja based patches to sound completely different than the originals. is there a fix for this or am i just out of luck and have to start over from scratch? i really like these modules but this has left me pretty frustrated and reminds me why i’ve left the software based music enviroment in the past. sorry for posting this out of frustration but all my patches with the new Infinite Stairs patches are completely different from the originals and all my Pallet Town Waves System patches needed tweeks to get them back to their original state.

Hi, yes unfortunately some ports were moved around and changed and some new features (particularly all the port normalling and mixers) will definitely change the sounds depending on how things are patched. In some cases volume levels of modules were altered to fit the standard of 10V peak-to-peak. IMO all these changes are for the better, but have the expense of causing some breaks, for which I do apologize. In your case, you can look in the patch files for the version of the plugin that the patch is expecting and acquire that version from the Github releases, then just ignore the update to the plugin until you want to deal with it.

Back to release news! It was recommended to me by @delexander to take a single operator from Boss Fight and turn it into its own module to be compatible with many of the other great FM operators in the VCV library, which was a great idea. As such, I present Mini Boss: a (you guessed it) FM operator module inspired by the Yamaha YM2612 with some cool features (basically the same as a single operator on Boss Fight). Notably, there is the new FM input (and depth parameter) that allows multiple Mini Bosses to be patched together into a full blown FM synthesizer with an arbitrary and infinite number of operators and algorithms! You can grab a compiled beta here. 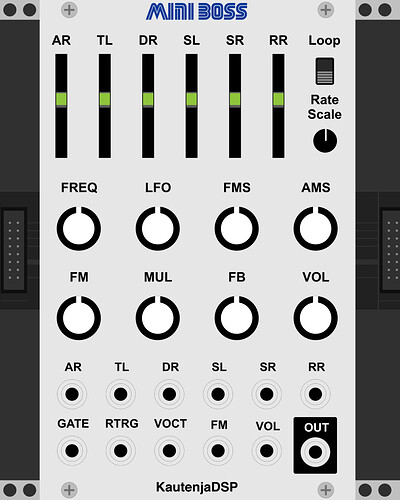 BONUS NEWS: Mini Boss pairs really well with Algomorph by @delexander , which is an intelligent routing module for FM synthesis. It’s really sick so definitely check it out if you’re into Boss Fight, or FM synthesis in general.

oh, I guess it needs a gate?

@Squinky Yep! Mini Boss is like Kitchen Sink with the ADSR->output switch on by default. I took a lot of inspiration for the panel layout and such from Kitchen Sink btw

thanks Christian. i will aquire the older version of the modules. can i keep both versions without any issues? thanks for providing me a solution.

Sadly, Rack itself doesn’t have any form of version management beyond pulling the latest version from the library. To switch versions, you’ll have to manually replace the “KautenjaDSP-PotatoChips” folder in the “plugins-v1” folder with the desired version. This can be done as needed without any issues though.

Thanks, Mini Boss is cool!

Did something change with the slider handles? They are visible in the module browser but blend into the background when the modules are instantiated (super echo/adsr, miniboss).

EDIT: I’m using redshift and it lowered the overall contrast too much, they look better without it, especially if they are running, the lights help!

Ah! Yes I should probably change the library view to default to all lights being off to prevent any confusion. I’m glad the slider lights help though; I thought they would be cool to add after playing with a Typhoon module.

I’ve been unable to keep up with VCV for a while due to school, but have wrapped things up and gotten back in the game. Moving forward, I’ve developed some modules as part of a new plugin focused on fundamentals and inspired by my favorite tools. All the renders below come from Sketch (the SVG tool I use) so the actual modules will look slightly different in VCV. If anyone has suggestions for features, I’d love to hear them!

Nurse ratchet (inspired by One Flew Over the Cuckoos Nest) is a blatant rip-off of the Make Noise 0Ctrl with a new ratcheting feature, control over envelope timings, clock pulse width, V/Oct range and offset, and a few hidden menu items for customizing the envelope shapes (i.e., vactrol emulation, PSG emulation, etc.) and changing the CV behaviors.

Big squish is inspired half by the interface of the WMD Compressor and half by the functionality of the Ableton Live Compressor, i.e., it looks like WMD, but sounds more like Ableton. It’s your basic compressor with a side-chain input and envelope follower output. Something unique I’ve done is put skeuomorphic LED VU meters around the knobs making it very easy to visualize how much the compressor is activating / the levels throughout the gain stages.

Wave boii is just a stereo sampler. There are plenty of these in the plugin library, but this one addresses a lot of the issues I run into with them. The key features:

I’d like to also add a EOC output, but need to find a clean way to work it into the panel.

Accumulation station is inspired by me needing the ability to solo and mute channels during development. The look is inspired by the Qu-Bit Mixology, but adds a stereo width control that I’m surprised no stereo mixers ever bother with. The width control sets the delay of the secondary channel (according to the pan setting) to a value between 1ms and 40ms to produce the Haas effect and simulate stereo width. It’s really handy for layering synth sounds into a thick fat wall or otherwise placing voices spatially in the mix. I’ve also created a unique visualization for the stereo field that will show both the panning and width around the panning control knob!

All look awesome! no feature request from me, just releazed. I think they’re finished (at least in concept

Thanks for showing these designs, they sound very interesting modules, particularly like the idea of the ‘Accumulation Station’ because it does spatial stereo width! Any idea when they maybe ready for the library? No rush, I know.

The Quad Operator also sounds rather interesting as well. Sure they all will be great!