one trick is to use tooltips on both buttons (the PM one and Mixer one) to see how they react and how their parameters work, that can also help to diagnose mis-matched behaviors

I would supply the patch but if you have nu mini/midilar then this likely won’t do much good. All knobs and faders tested are fine, the buttons do not mute or fade anything on mixmaster here unless I hold em down, which is not what a latched button should do. M1 Ventura oddity?

Hardware midi controllers generally have software that set how their buttons behave and the signals they send.

I have mi Minilar mapped via Patchmaster. The buttons just send a trigger. Works fine to toggle Run on Clocked, but no matter whether button is latched or not on Patchmaster, the button is momentary, as in it does not stay lit on Patchmaster so MixMaster thinks no latch for the fade/mute.

The Minilar is a small version of the Midilar from Jacub. I think there aren’t many about in the wild, but it seems to work just fine in any daw for momentary or latched events (Reaper here) Given it just sends a trigger and I can see the mute/fade button and patchmaster button blink, latched seems non-functional

OK I think I see the confusion - Whether a button is trigger or latch on PM determines the signal it sends OUT. It has nothing to do with how that PM button is itself controlled by an external hardware controller.

This has come up before and the solution is to use the hardware controller’s settings to change the signal that controller sends out when a button is pressed.

no settings for this little gem, it is just a compliant USB MIDI device

Should’nt a latched button latch no matter what is sent to it? And how is a mouse triggering button different from a trigger sent by the Minilar button?

My launch control XL2 is also a compliant USB midi device but has those settings, so the issue would be that the minilar apparently only produces triggers, and does not have an option for latched behavior (unless it does have it and you didn’t see the option for that)

In CV yes. Not in midi apparently. Your midlar does not send ‘triggers’ in the modular sense - it sends midi messages.

Should’nt a latched button latch no matter what is sent to it? And how is a mouse triggering button different from a trigger sent by the Minilar button?

Look at the the parameter’s value with tool tips on, when toggling a latched button and a trigger-toggle button and you will see the difference

okidoki, but why does clocked’s Run button toggle fine, whereas the Fade/Mute does not?

because they are not designed the same way. Look at the tooltips on the clocked button when you press it with the mouse, then do the same on a mute button in the mixer, you will really see what I mean. It was a design decision, since there are two ways to do things

tooltip on either latched or unlatched shows a momentary flip to 1 from 0. Not much help I am afraid. And I can see the button on Mixmaster being lit momentarily. Since a mouse triggers it to toggle, why does a momentary trigger via MID not? MidiMap does translate that to CV, does it not?

It also has nothing to do with Mute buttons on MixMaster - you could take MM out of this equation entirely.

This has to do with the kind of signal your midi controller sends out when a button is pushed - latched or momentary. Nearly all midi controllers have an option for that. If yours has the option, switch it from momentary to latched - that’s the answer to your question. If yours doesn’t have that option, it probably should and there’s not a lot we can do about that I’m afraid.

OK, I put this to rest, there goes one bit of functionality I was hoping to get out of this little gem. So as designed, if it gets an input via MIDI it follows that. All good, just makes for a small dichotomy where conceptually a trigger does not toggle a button when conceptually it should (and does on other module for example). Some option to latch it on a trigger also perhaps? For those ‘not so configurable’ devices sending MIDI?

Woahh, amazing, just a few minutes into the video and quite wowed, great work to all involved!

there goes one bit of functionality I was hoping to get out of this little gem.

Maybe not… I might have a solution for you.

When mapping your Minilar to PatchMaster, use Stoermelder’s Midi Cat instead of VCV Midi Map. Someone on facebook told me today that Midi Cat lets you define the button behaviour if your midi controller does not have that capability. I just tried it and it seems to work.

Map your button to PM, then right click on that mapping in Midi Cat, go to “Input mode for CC” and select ‘Toggle’. That will turn your Minilar’s momentary button into a latched button and it should then work with PatchMaster’s latched buttons.

Ben to the rescue once again! 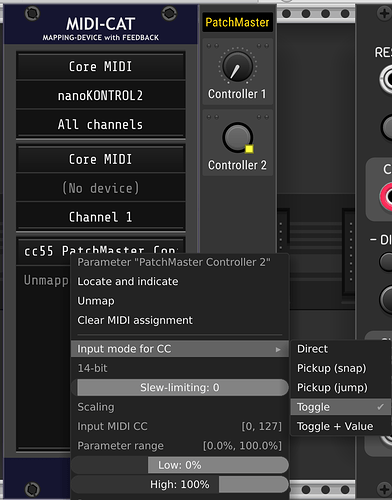 Now that is a nifty bit of workaround, albeit at a sample delayed. Will test, should work given this is for fading in/out things so 1 sample delay should be no issue. Thanks a bunch in any case.

Maybe a feature request to add a latched type button that latches no matter what the input (momentary or latched) ?

Ok, Ben (@stoermelder ) to the rescue :D. all working as wished, so good to go. tested with all the buttons of latched type and works as it should.

Yes! I was about to recommend MIDI-CAT. This is how I get PM to work with my Launchcontrol XL with the buttons set to momentary

PatchMaster is really great, was thinking about use it with another soft than VCV Rack and my Launchcontrol XL, 2 screens and a virtual Midi router, here what i found ( wip) using zzc Polygate and computerscare knoly pobs, maybe someone will like the idea… 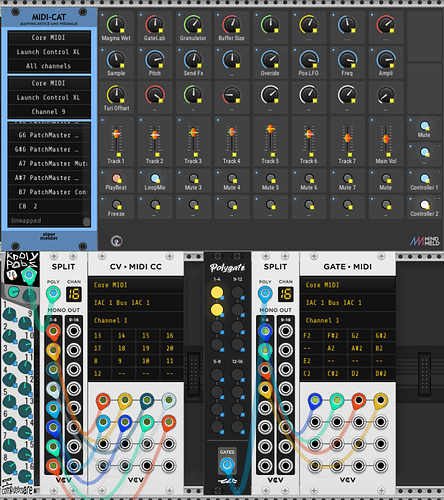