from time to time i experience a weird behaviour in Rack 2.1.0

Where as i reopen an existing patch, for some reason all modules seem to be re-arranged in a total different flipped order then in which they are actually saved in the patch. 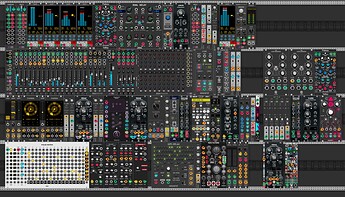 But when i close Rack and re-open it, it now looks like this:

Where as just 1 day ago, it was still appearing how it is originally ordered, also after re-opening the patch.

I wanted to report this bug earlier, but i have not found a way (yet) to reproduce this at will.

It is becoming quite annoying

Is any one else experiencing this?

I’ve not experienced anything like this, going from 4 rows to 3 rows is pretty drastic!

I had this, too, and reported the bug. They’ve had other reports, and are looking into this, from what I understand.

Thanks Nick, in that case i hope they find the problem soon

Yeah Marc, it sure is!

Just had to spend several minutes rearranging a patch that flipped from 4 to 3 rows with everything rather scrambled, never seen this before and had this very patch going for about a week, getting it to where I want it. Nothing I did should cause this, so not sure if the stars are misaligned or what, but that is not a visual bug I had encountered in months, been running 2.1.0 since it dropped.

Does the rearrangement happen immediately when

If the 2nd, then I suppose there is a bug with some type of auto save.

I sure hope it is not case 1! That would be horrible.

In 2.1.0 it happens immediately on reopening a saved 4 row patch. If I quit Rack after an autosave and reopen it then 3 rows become 2. Total mess. Now the kicker is: If i reopen same patch that opens in 3 or 2 rows after reopening in Rack 2.0.6 the patch opens perfectly as it did in 2.1.0 until this weirdness started. So something is afoot, but I fail to be able to put my finger on where this issue all of the sudden, after near 2 months of using 2.1.0 happened as of this afternoon, as earlier today it was fine.

This is probably unrelated but since I have been chasing a possible auto save corruption problem for a couple of days, I will throw this out there. I keep having Rack crash and the log shows no modules implicated in the stack trace. I.E., it appears that Rack crashed internally. Several of the crashes have the following line as the last in the log file (i.e. with no stack trace or error indication):

Does anyone know what this line is doing and whether there is a hook for VCV to update the Rack or patch JSON configuration at run time? Or is this just a license check or some such? And why would it seem to crash Rack? Of course just because it is the last thing in the log does not mean that the crash occurred there.

oddly after re-updating to 2.1.0 it also loaded fine, after trashing autosave. So yes, likely this is due, however sometimes opening via File->Open… also causes this. Flipping back and forth between 2.0.6 and 2.1.0 (it actually also happens on 2.0.6 after a save and reopen) seems to help. I have no clue whatsoever what to make of this whack-a-mole issue

If you have the “neat & tidy looking patch - OCD thing” like me,
opening your patch to see it all scrambled is somewhat like this:

Oh well ok… it might not be that dramatic

Oh, but it would be exactly like that if I saw my patch do that!

trust me, my reaction was much more severe than yours, as I couldn’t quite work out how it had been until opening a previous version in 2.0.6 which luckily loaded fine (and all have since), but any attempt to go 2.1.0 results in same serious reaction of pulling mostly non-existing hair out

Is this limited to a particular OS platform?

OK, that confirms it appears a Mac only issue. Kicker is that I had Rack2 2.1.0 running mostly fine under 12.3.1 since the day the update dropped. The only thing I updated since then and between things working fine and not fine was XCode latest and it’s updated commandline tools. That should have exactly zero impact on things…

Hi all, trying to track this one down. Can anyone share a patch file where this issue has occurred with me?

This patch needs the Southpole plugins. It tends to crash on Start of Rack2 if it’s in autosave, but it always opens fine if I tell Rack2 on next start not to clear patch but load the one that crashed anyhow. Never fails and works fine.

I know this one opens fine in 2.0.6 in it’s 4 rows, but 2.1.0 makes a 3 row jumbled mess out of it, Never saved that mess so don’t have one lying about that shows issue and failed to take a screenshot. Sorry, but can’t update to 2.1.0 again as it drives me up the wall in a few seconds… Looks like you need an M1 original machine (Mini or MBP) that was since updated to 12.3.1 from 11.6.x to see this happen in all of it’s heart-crushing glory

Oh, one other note, after it does rearrange your 4 row patch, if that is in autosave (likely yes if autosave interval is at default), then it becomes a 2 row even more jumbled heap of mess. Not tried if subsequent start with that in autosave would make it a.one row never to be put into logical flow again patch, but that seems likely…

@Eurikon : Did 2.1.0 ever work fine on your M1 with 12.3.1 or did it take a week (or so) before this started? If it started a few days after OS update, what did change system-wise on your Mac since then? I know mine (and I am sure that was the only one) was XCode and command line tools update, after that Rack 2.1.0 was unusable visually speaking. 2,0,6 is fine with same updates…