If I create several voices and have lfo’s fade them in and out, is that considered generative, or is there more to it than that? It would sound generative, but in reality it would repeat the same way on each cycle. I think it might be more accurate to call something generative if the voices themselves change over time rather than just fading some things in and out. Or is it everything goes and if it changes over time it’s generative?

I feel like it’s generative if you can run yr patch and every moment is different from the last , even if you played it for hours, because there are no nicely overlapped timings of things. So if your lfos are timed to .1Hz, .2Hz, .4Hz you will have the same events that might be changing but they are still overlap perfectly so you will just get the same moments over and over. But if you throw prime numbers in the mix, like divisions of 7 or 11, or weird decimals if talking hertz that will create unplanned combinations. But i don’t feel like there some concrete idea of whether parts come in and out, the voices/sounds change, or melodies change, but as long as the machine kind of takes over, the patch evolves on its own, and nothing is in a loop, that’s got to be generative right?

I agree with most of what you are saying. I think in general everything is looping, and I would consider something generative even of it simply went from light and easy to more dark, or moody, and back again in a slow natural way. I am also fining how incredibly difficult it is to describe this stuff.

Probably anything that immitates a sufficient amount of a composer’s job passes for generative.

Something like the brownian motion settings in Impromptu or that one module that has a “galaxy of chords” where it moves between chords but the actual up/down direction is random. An LFO by itself probably doesn’t count, but an LFO or a randomizer that goes through sample and hold and somehow goes through a chain of events that makes something out of it might.

To me it would be: when you apply the same modular interconnected logic to your composition process than to your sound path. it doesn’t mean anything of course. does it need to have random to be generative?

Lately I’m having a lot of fun with polyrythms, and I don’t know if you can call this process generative… It creates unrepetitive patterns, I sure didn’t intended to create the melody that it plays, but there is no random at all, it’s jus a complex thing created out of simple things. Is it generative??

to me, generative has some element of randomness to it, where the machines makes decisions that were not exactly pre-programmed

we could start a philosophic topic on the existence of randomness and the difference between random and extremely complex… or we could make a new module random generator based on electron spins, which would be the only true random generator!

Maybe it’s simpler than all that @pyer. Maybe if it sounds generative, then it is generative.

This video has been in the community for i while but I think it’s a great example of music that I would call generative, but without any random element, everything is programmed somehow.

Very interesting video @pyer. I have been playing with synced sine waves into a mixer to quantizer just last night… Learned a couple thing here. Thanks for posting.

This couple of videos from mylarmelodies may be also of your interest regarding Generative Modular Music, Jim (@veryfungi)

Plus a bonus track

P.S.: I recommend you to dive through the mylarmelodies channel, maybe you’ll find there other interesting videos for you as well (he explains concepts really, really well – one of the best Eurorack channels to me!

@Josep I’m currently working through “The Book of Bad Ideas v2” which covered the sine waves to a mixer for creating repeating melodies. I will check out the items in your post as well! thanks!

Brian Eno used and coined the term “Generative Music” (in 1996, see below) to describe any music that is ever-different and changing, created by a system. The term has since gone on to be used to refer to a wide range of music, from entirely random music mixes created by multiple simultaneous CD playback, through to live rule-based computer composition.

"Some very basic forms of generative music have existed for a long time, but as marginal curiosities. Wind chimes are an example, but the only compositional control you have over the music they produce is in the original choice of notes that the chimes will sound. Recently, however, out of the union of synthesisers and computers, some much finer tools have evolved. Koan Software is probably the best of these systems, allowing a composer to control not one but one hundred and fifty musical and sonic parameters within which the computer then improvises (as wind improvises the wind chimes).

The works I have made with this system symbolise to me the beginning of a new era of music. Until 100 years ago, every musical event was unique: music was ephemeral and unrepeatable and even classical scoring couldn’t guarantee precise duplication. Then came the gramophone record, which captured particular performances and made it possible to hear them identically over and over again.

I really think it is possible that our grandchildren will look at us in wonder and say: “you mean you used to listen to exactly the same thing over and over again?”

And here are some amazing examples of Generative Music:

Good day. I am new to the “game” here, so atm, I build small patches. Generative, to me, is a composition where “randomness” is externally applied to components which produces a different change to what was repetative.Done slow over time gives a sense that song wasn’t repeated.(albiet, to most listeners, not peeps in here).I have done this with LFO’s, Sequencers, Shift Registers, and “randomness” perimeters such as Impromptu Moduales provides. Espicially done slow, over time, can fool your brain.

based on electron spins

use to be true till the Hadron Collider came into play.I had read that 2 electrons, traveling opposite directions,react the same, after only 1 had some external stimulation.

I first thought it was about feedback. Any situation where you can get 2 parts of the system to interact with each other in a loop does that but the more I’ve done this stuff the less i find myself actually doing that. I’ve been frustrated, particularly, by attempts to get audio signals to effect the system as a whole. I mean, I’ve done it, but it didn’t seem to be very interesting.

dag, I think your on to something there with the feedback thing. This is something I need to try more of. I have tried audio feedback in the past and it doesn’t sound good to me usually, but I think cv feedback might be more promising to get the 2 parts of the system to interact as you say, and then its a living breathing thing almost.

@veryfungi Another nice topic, good tip! So I will try to add some thoughts to the general speculation (and please forgive my uncertain English).
Following the Wikipedia outline, we can say that generative music is related to an output that’s completely self-processed by a system, I mean totally machine-generated, from the first human “load-bang” all the way on. That doesn’t mean human intervention or action is not there, maybe the opposite, because such a system has to be entirely pre-programmed by humans. To say so, human contribution is all focused in the pre-production step, and reluctant in the direct production of the generated score or sound.
The other peculiarity of generative music (as per Brian Eno), is that the output has to be ever changing, continuously evolving at some rate (that can be very slow or really fast, the rate of variation is not a requisite), with the machine responsible to draw and self-transform its audio source, processing chain and control parameters in real time, in the time domain.

We could name two contemporary classical composers that can reflect both sides described above: Stockhausen for the generative control through serialism, Xenakis for the exploration of probabilism and indetermination.

Both of the aforementioned conditions are substantial to the discussion. Two opposite very trivial examples:

To that I want to add one subtlety: I feel that a continuous and unpredictable evolution has to show up not simply in the sound, but in the (musical) form too. One more example: pure randomness is in some way guaranteed to achieve ever changing output, but at some point in time we yet begin to perceive howsoever that as a pattern, a repetition. That’s basically because the form is not evolving (in my opinion).

The main traits said above involve then some inherent attributes to be generally present: unpredictability, randomness, non-linearity, automation, deviation. Algorithmic composition has been around for a while to pursue such results, following different paths but commonly referencing physical, mathematical, or biological models (fractals being one of the more abused ones). This way we reach to consider subsequent stochastic, procedural, and linguistic approaches (chaos theory, cellular automata, Markov chains, etc.) and so on, about which the Wikipedia topic (quoted by @Josep) gives us some hints.

Anyway, a few generic elements I usually think of as related with possibly generative results are multi-modulation of control signals, use of noise as control source, loose clocking, deliberate desynchronization, reintroduction of signal feedback in the system at every level (I like the indetermination / casualness of the sound generated by circuit bending and no-input mixer wizards, here).
But definitely I think of “generative behavior” more in terms of the concept and the intent, than the tools.

the difference between random and extremely complex…

i think that for our purposes here, there isn’t any effective difference 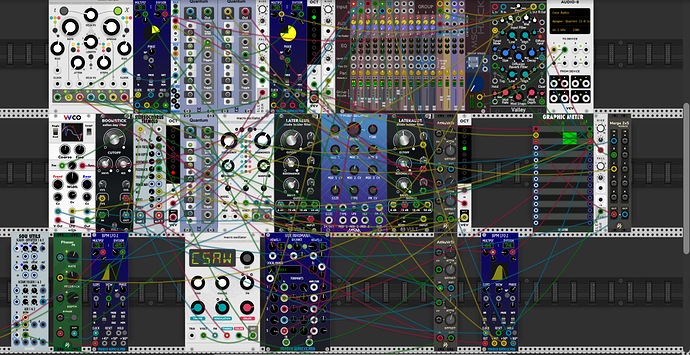 You already have Marbles in your patch which should be able to accomplish this with some proper tweaking/modulation. However, if you want to go further with it or try something else, the Fate module from the Geodesics plugin could help. For example, you could change a sequence over time using a slow lfo to modulate it’s probability of playing notes from a second sequence or its internal random. Also, a Bernoulli Gate from the Audible Instruments plugin does probabilistic gates/triggers and could be useful for generating a random clock pulse for Fate to sample the second sequence you are feeding it.