Vult Unstabile bug? Huge cutoff downshift at 352.8 kHz and above

The Vult Unstable filter works consistently with a Rack sample rate between 44.1 kHz and 192 kHz

However, at 352.8 kHz and above there is a massive downshift in the cutoff frequency, making it nearly unusable at those rates.

I did not test any sample rate below 44.1 kHz due to the following post from Leonardo:

In general, none of the Vult modules are tested for sample rates less than 44.1 kHz. I do not have plans to support less than 44.1 kHz. If you lower the sample rate expecting to consume less CPU, in most cases that will not be the case for Vult modules. Many filters become unstable at low sample rates, that requires me to implement internal over-sampling in order to keep the filters from failing. So, even when you set 24 kHz, the module will be running at 44.1 kHz and doing resampling in order … 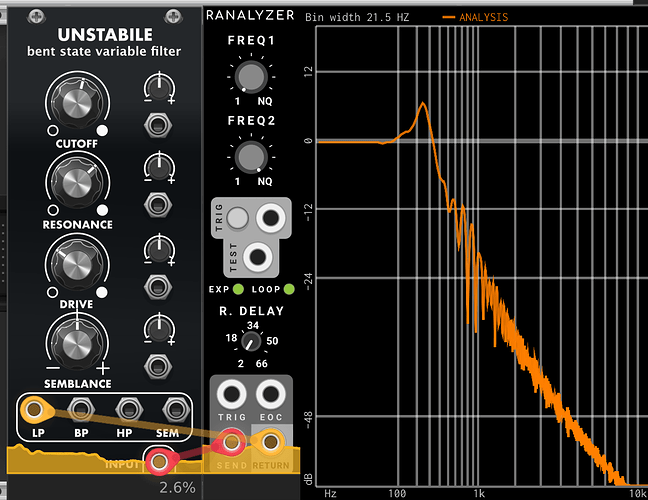 Since that sample rate was not available in Rack v1 it was untested. As I mentioned in my other post, all the modules have optimized code for the common sample rates available in sound cards (44.1, 48, 88.2 and 96 kHz). For all other sample rates there’s an unoptimized fallback. In the case of Stabile the fallback is incorrect.

All modules released during the Rack v1 period are not tested for the new sample rates. If you find more errors, just report them in my GitHub and I will fix them when I have time.

I looked for your GitHub before posting here, but failed to find it. Can you share a link?

I believe Issues · modlfo/VultModules · GitHub is what you’re looking for.

For all other sample rates there’s an unoptimized fallback

It’s fine to have obscure bugs, but “unoptimized fallback” sounds a little different from what actually happens…

For all common sample rates, I create precomputed tables for speeding up calculations of equations. In some cases I have specialized code for an specific sample rate. That’s what I refer as “optimized” code.

The fallback functions perform the calculations for arbitrary sample rates. The bug reported is in this fallback code which was not tested. It was neither possible to hit in Rack v1 (actually v0.6) when this module was released.

352.8kHz seems like an absurdly high sample rate. Do you have dog ears?

I have patched up a VCV Rack benjolin, which sends a derived highly variable pulse wave from two triangle waves and a comparator, and sends that signal to the filter input. There is no anti-aliasing on that input, so there can be significant aliasing when higher pitches are produced - the ultrasonic sound above the Nyquist frequency are reflected back into the audio range.

I was experimenting with sample rates, and heard a definite improvement going from 96 kHz to 192 kHz. So I wanted to try 384 kHz to see if I saw further improvement.

Absolutely - I’m working on it. I still need to make a little demo video. I am loving the results!

I’ve suggested it as a module to a few devs, a couple sounded interested but no one has made one yet to my knowledge. Look forward to having a play with it.

I read somewhere (can’t find it now) that Rob Hordijk didn’t want his module in software, there was also something with one of the modules of MSM that had to be removed when the source code became open source.

This one had to go.

I read something he wrote, or heard him in a video (not sure which) something similar. But what I took from that was he preferred the results of hardware because it provided more subtle variation. I didn’t interpret the statement as meaning he would be upset if it was implemented in software. But I could be wrong.

A number of people have gotten licenses to market hardware based on his design. I suppose a VCV module would require a license agreement as well, whether free or premium. But I would be shocked if he would be upset by a VCV patch that emulates a benjolin.

I think a patch would be OK, but not a module.

I am also curious for your patch! I have made an emulation as well and will try to post it also these days. I hope to learn from your version!

I also made an emulation patch of the Wing Pinger by Meng Qi. Will post this as well. I don’t know if it resembles the real hardware, but the result is quite musical

there was also something with one of the modules of MSM that had to be removed when the source code became open source.

This one had to go.

I’m sorry but if that had to be removed that’s at the level of stupid of YouTube copyright claims and takedowns. It had no Hordijk or Benjolin naming on it, looks nothing like the countless clones of Benjolins, which can be sold without problems and the Benjolin is an open, DIY, educational design anyway. It fully complies with the VCV Plugin Ethics Guidelines. So if that’s true it’s pretty ridiculous.

It is recommended to follow these guidelines for all plugins, but you are not legally obligated to do so. However, it is a requirement for:

If it doesn’t mention Rob Hordijk, or Benjolin, does not have it’s logo, does not have the same panel design or component layout, a developer should be able to make as many “Benjolin” or other modules as they like. Yes?

I think a patch would be OK, but not a module.

(RANT-on) I’m getting a bit tired of the (mostly unfounded) license and copyright paranoia in the community. It’s stiffling, spreads a bad mood and is just plain annoying. Just abide by the guidelines and get on with making fun stuff. If we’re to become a bunch of half-assed lawyers hurling hear-say at each other, the fun will really go out the window, and has sometimes. (RANT-off)

Okay, so it was the The TwinPeak Filter, not the Benjolin. Lots of clones of this being sold.

I made my plugin closed source a while ago because Rob Hordijk only allowed me to release the TVCF (TwinPeak filter clone) when closed source.

I highly doubt that Rob Hordijk has the power to patent or protect the “principle of two inverse-parallel low pass filters” - it smells like the dubious and illegal practice of software or algorithm patents. But I can’t be sure of course and I’m not going to bother looking.

Michael Struggl obviously reached out to Rob who said he couldn’t implement the design in Open Source software (why?) and he complied. I highly doubt he has any legal bearing to do that but I can’t be sure and I’m not a lawyer. I don’t see why the module should not be fine as long as it adheres to the above mentioned VCV ethical guidelines.

My take: Don’t ask and make sure it doesn’t look like an original and don’t mention where the inspiration comes from.

I just casually looked and Moog has three patents. The first two reads like patenting a general VCO and VCF. If people took crap like that seriously there would be no music industry, no synths or modulars and no VCV Rack. The definition of stiffling. Sigh…

@pgatt and @koen.kaptijn - The patch and demo video are now available!

Benjolin patch for VCV - Show me what you can do with it! Plugins & Modules

In 2009, Rob Hordijk designed a “primitive” synth instrument called the Benjolin and released the design to the world for DIY enthusiasts, as well as developed a kit and conducted many workshops. It consists of two oscillators, a multimode state variable filter, and a pseudo random circuit called the rungler. It is a shift register sample and hold using oscillator 2 to as the clock, and oscillator 1 triangle through a comparator to XOR with the end of the shift register as the data input. Three …