Well, after dreaming about modules I would like to see, I finally took the plunge, and created my own plugin - Venom Modules. This is just a beta release - it is definitely not ready for release to the library. But hopefully soon it will be ready - with your help!

I am asking for help with beta testing to help root out any bugs, and to give some feedback on the feature set, layout, documentation, etc.

Full documentation and downloads for Windows, Mac, and Linux here

Bernoulli Switch - Primary function is to randomly route 1 or 2 inputs to 1 or 2 outputs. All the features are available in other existing modules, but none have this particular collection of features. I think it is a good candidate for any fixed rack due to its flexibility - it can do many things that are frequently required in most any patch, so it likely would never go to waste:

WINCOMP - A polyphonic windowed comparator that was inspired by the relatively new VCV COMPARE module. I submitted an enhancement request to VCV Support, but it was declined. So I created the version that I wanted to see.

RECURSE - A single module making it convenient to set up recursive processing via polyphonic send and return. So far I have used it to:

Rhythm Explorer - A random trigger sequencer inspired by the Vermona Random Rhythm Eurorack module. But definitely its own beast.

None of this would have happened without the help and guidance from Patheros (Andrew Hanson), creator of the the PathSet collection of modules. Beyond some great ideas and advice, he also wrote the prototype for the Rhythm Explorer after I gave him some preliminary specs. That effort was actually the genesis of this plugin.

There are two additional modules that are tentative, and likely will not be included in the first release.

One is an enhanced version of the VCV CV MIX. I prefer that the enhancements are made to the VCV Fundamental module, and submitted a request to support. Bit if that request is declined, I will release my version.

The other is a variant of the 21 kHz Palm Loop oscillator. I’ve managed to make all the waveforms in the same octave, and added convenient ability to function as a 0 Hz carrier. But I have some serious aliasing issues with two of the waveforms, and could use some help. I’ve described the issues more fully in the documentation.

Thanks to all - I am looking forward to some invaluable feedback.

Oh, the Rhythm thing and I are going to have fun!

But please. A neutral faceplate. And, also from a visual point of view: not sure about the Rate/Mode buttons. Didn’t quite immediately get that they are buttons. A segmented lcd kinda display would be cool.

I installed the Windows version and plan to experiment with the Rhythm Explorer.

@DaveVenom I hope you don’t mind that I edit the GUI a bit, if you don’t like it please let me know I will delete the files then.

I played a bit with the GUI in the res folder and made two simple versions of the faceplate: 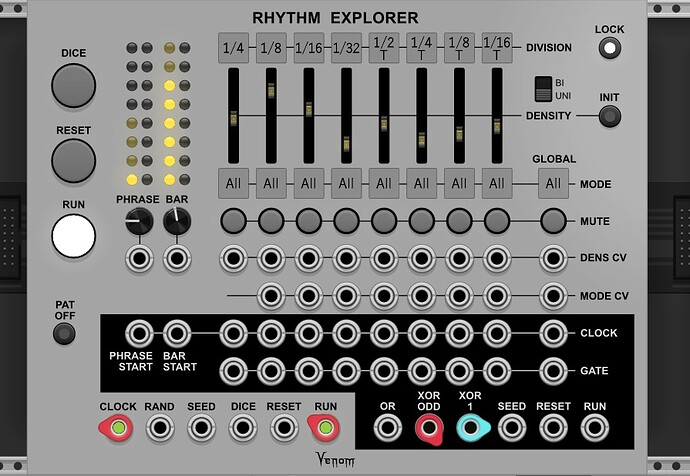 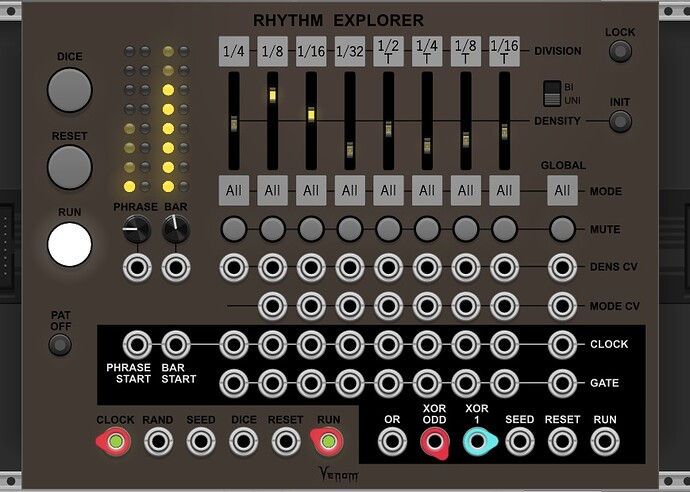 or just download the zip and extract it to the res folder and rename the files ALT_RhythmExplorer.zip (42.7 KB)

But please. A neutral faceplate.

Yeah, I kinda knew that was coming.

I never intended for a red faceplate, but then while making a variant of Palm Loop I wanted a quick way of differentiating my version, and just happened to pick red as a background, thinking that would be painfully obvious.

But then I started to associate red with danger and blood, both of which resonate with Venom, and I grew to like the combination. Patheros warned me about the red, but I chose to be obstinate for a while.

I will relent and save peoples eyes with a more neutral palette. If I get a bit ambitious I will offer multiple options - there are a number of plugins that I should be able to study to make that coding easier.

I hope you don’t mind that I edit the GUI a bit, if you don’t like it please let me know I will delete the files then.

Not at all - thank you! The “white” one looks nearly ready to go, though I think the square buttons could use more contrast.

The brown version looks really good with the yellow lights. I will see how it looks with all white labels, and maybe soften the black a bit.

I will see if I can find time tonight to experiment.

One thing I don’t like about the SVG switches is how it distorts the text as you zoom out. Not sure why that is, when the same text on the faceplate looks much better as you zoom out.

I don’t know if there is some trick to avoid the SVG switch visual distortion. I might have to play with dynamically updating actual text, but I prefer not to have to distribute a font with the plugin.

Not at all - thank you! The “white” one looks nearly ready to go, though I think the square buttons could use more contrast.

thanks you, Dave,
I’ve made an xtra-light version with the same color as the fundamental modules, which is even better imho. 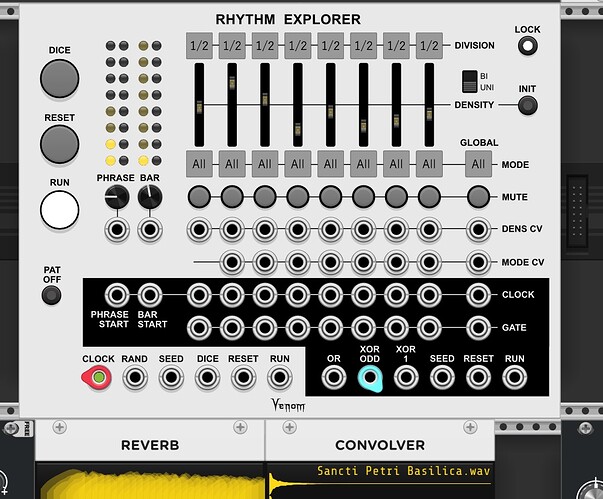 here is the file:

That does look good. Should I worry about it looking too much like a VCV brand module?

I don’t know, how the copyright is for the GUI,
but maybe you ask at support@vcvrack.com for permission.

Nevermind and by no means a suggestion but I got carried away a bit:)

But then I started to associate red with danger and blood, both of which resonate with Venom, and I grew to like the combination.

Congratulations on the release Dave, Rhythm Explorer in particular look like a lot of fun!

If you want to bring some red in, consider using it in small doses - like for the Venom logo for example. Even then I would be tempted to make it not quite so ‘primary’ - maybe somewhere around the middle strip on here would work - just not the one on the far right. Another option might be an acidic yellow/green colour.

That does look good. Should I worry about it looking too much like a VCV brand module?

Tweak the colour code so it is very slightly different from fundamental and you should be good (even if it looks basically the same). No one ‘owns’ light grey.

I have a question - does anybody out there like the red/black/white scheme besides me? I start working with some more muted color schemes, and every time I see the strident red/black/white I still like that the best. Maybe I am just a nut job.

I believe I may have settled on a strategy for alternate skins. I like how the Submarine modules draw everything and put next to nothing in the svg files. In the long run I think this style would speed up development for me. But considering where I am now, I think I will go with something like Count Modula. and swap in different svg files for each theme.

I played around with the “brown” suggestion from rsmus7, and came up with this. I think it could work as a low contrast theme. I haven’t decided whether to keep the red Venom, or make it yellow as well. 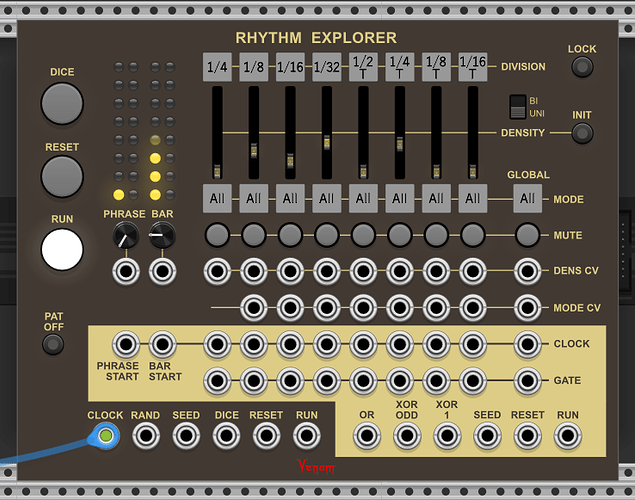 I just realized that extended discussion about color schemes and other changes should probably be moved to a development topic.

I have a Neutron too. But not in VCV.

I find the red background + black text especially jarring given the low contrast. When doing a quick search on red color palettes for UI design I seem to prefer slightly darker reds with white text, or much lighter reds with black text, but ymmv.

With my limited skills color palettes in graphic design projects always feel tricky to me. It’s easy to get them to feel off and hard to get just right. But it’s definitely one of those things I end up sinking a ton of time into, or just hacking by stealing some palette from Adobe color…

FWIW the page and screenshot below is a good example of how these shades of red can be judiciously combined with white and black text. It’s still a bit jarring for my taste but it works. But as @steve suggests using it for accent seems to be what makes it work visually for me.

This month, we're going to talk about one of my favorite topics in design. Color! I've been diving deeper into color and color theory lately and I'd like to take a look at a few games and break down...

This VCO is cool. The different approach to alias reduction works really nicely, I think. It does seem odd, however, that it is monophonic. Most VCOs a poly these days, aren’t they?

Yes, I think that module has a number of interesting things going for it. I like how it does decent anti aliasing without the obvious distortions in the wave forms at the discontinuities. When making my Sophia emulator, the anti-aliasing oddities in other VCOs tended to add unwanted grit when using an anti-aliased saw wave as an envelope. I wanted to use the Palm Loop, but it had some issues that made it unsuitable (square and triangle are subs, lack of polyphony, and some sync issues)

I hope you take the time to read the doc I wrote for it, which is mostly about the strengths of the Palm Loop, how I have modified it, and where I am struggling. One of my goals is to make it polyphonic while incorporating simd for performance, but that all depends on solving the aliasing problems I am having with my existing mods. There aren’t many details in my writeup, but if the VCO interests you, I’m happy to provide more

ah, cool, just went and read it. it does seem like the aliasing is completely unsurpressed if you use two of them and LFM one with the other. At least it looks that way.

I didn’t quite understand that part about negative frequencies. I think it’s well known that the Fundamental has code in if that makes that happen, but I’m wondering if it happens with “proper” PM VCOs, of which there are many. You mention the Bogaudio, which is super popular. How can I see it doing this bad thing?

Of is this more about the PM when the carrier is at zero - something I remember you posting about a lot maybe a year ago?

Do you have an example path, or a screen shot of the bad spectrum?