Subject changed to reflect that I now have solutions I can share with you.

I recently posted an aggressive wah style lead preset here. I was really trying to make a dent in recreating Derek Sherinian’s Monster Lead originally done on a Korg Trinity and featured in many works under his name, Planet X, and Dream Theater. There are plenty of examples on Youtube (e.g. Derek Sherinian - Master Class (Transition Riff No Third) - YouTube), but I’m failing to do a good job here. If I had a block diagram of the preset, I’d be able to make a good stab, but my poor ears aren’t really telling me enough. Can anyone in the peanut gallery help and old codger out?

That sounds to me like the classic “hard sync”. use fundamental VCO-1, two of them. Set the first to be the fundamental. Tune it appropriately. feed its output into the sync input of the second one, then set up and envelope generator to modulate the pitch of the second VCO. As the ADSR sweeps the second vco up and down the second one will keep it’s pitch, but the harmonics will sweep up and down with the ADSR. This is a very, very common synth sound from about 1980 - it’s all we had back then. You can get similar, but different, effects with a wave folder. After you master this technique, then use only my VCO’s and no others. Many of them have nice sync (and wave folders) sounds that no-one uses.

It’s this sound that comes in at 11 seconds? I think that was and octave-plateau cat mono synth:

or this sound at 8 seconds? 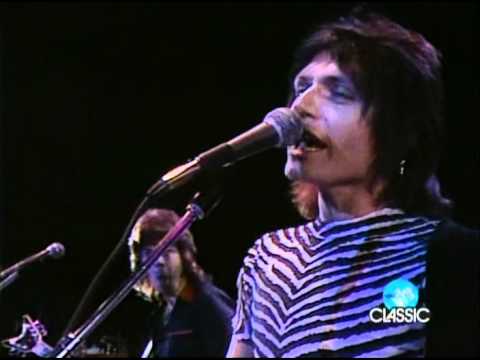 I know about sync. I’ve done sync patches including something along the line of the Prophet 5 sync from the Cars song, but that really doesn’t cover most of the character. I might try putting some parallel sync oscs rather than your Saws in the early stage of wahrudeness though and see if it gets me closer. There is definitely some wah in there as well. Some have suggested there’s some sort of feedback too. Running stuff through a Marshall stack doesn’t hurt either. More extended demo (it’s worth listening to the whole song though): https://www.youtube.com/watch?v=muemQ4ASock&t=118

How I’d lurve just a good block diagram of the signal flow with a rough idea about parameters. I think distortion and delay on a filtered saw is the key idea, but I really have little clue what sort of DSP and signal paths Korg implements on the trinity and triton where this was originally done. I’m fairly certain you can’t do it on a Krome as I have one, and I’ve found nothing similar for it. If anyone can point to a contradiction to the previous statement, I’d welcome it as that would give me a patch on real hardware to study.

Curiously, I just ran across an interview where D.S. says he’s still using a rack mount Triton, so this sound, at least for him, might not even live on the Kronos. Dunno!

Can you not zoom in on the synth and read the patch name?

The patch is “Monster Lead,” but that doesn’t tell how it’s constructed. On the TR-Rack (Rack mount Korg Trinity) it is patch Prog B14. This info comes from Synthmania’s site, and his quicky demo shows that the timbre is the right one, though DS probably has modified it for his own use. If I had access to any of these vintage Korgs, I’d be able to analyze the patch for ideas on how to simulate in VCV, but that avenue isn’t available to me.

Surprise surprise! I’m a liar. I poked around on the net, and there is an old zip from KromeHeaven called suspiciously enough Progressive Leader Collection for Krome which has fairly convincing implementations of some of the Sherinian and Rudess leads. The site no longer functions, but is linked from Google, so I went through my ancients downloads from there, copied it to an SD card, and whoopie it woiks! So I can pull these things apart and try to do them in VCV. There is an built-in OD/Wah effect in the chain that may prove challenging to nail down. The other challenging thing is that my controllers (Roland) don’t have a four way joystick. Oh well.

I’m still keeping the wahrudeness preset around as it’s got its own unique funk.

If I make any headway, I’ll alert the media.

This sound like a lot of classic lead sounds is strikingly simple, and it really relies on your playing to make it come alive. Here’s a rough diagram of the flow. The LP filter is set so that the saw is squeezed out when the joystick is completely up, and I think there’s keyboard tracking there so the transition stays the same no matter where you are on the keys. 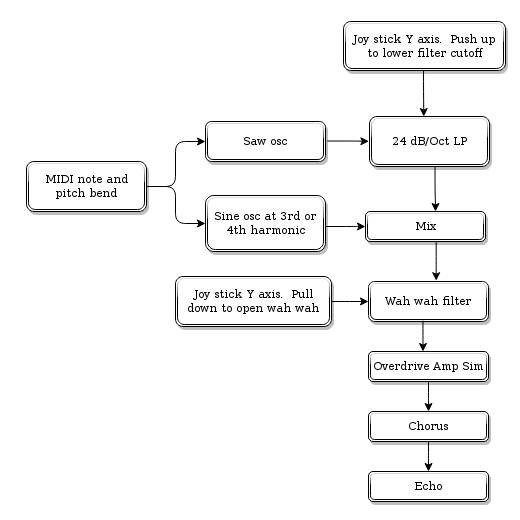 Very much edited as I found some mistakes.

Nice! Glad you cracked it. Haha, relies on playing. Reminds me of guitar. People who are really good always sound like themselves and sound great on any guitar. It’s in the fingers.

Here’s a rough draft of where my patch stands. There’s much to improve, but gets most of the idea across I think. The two latching buttons choose 1) whether mod is wah or cut to tone, and 2) which sine tone shows on the fade. If you have a full joystick sending appropriate MIDI messages, feel free to experiment. Someone out there might have a better idea about the wah and EQ there, but I’m going to toss this out for folks to play with.

N.B. I use Ferox and Flame from Vult commercial for my wah/overdrive, but anyone who gets a great sound with this from the freebies, I’d appreciate hearing back. Thanks!

Hello there, I have tried out both of these, for the ‘tinymonsters’ I had to replace Ferox with Vult Freak and use their submenu and used Ferox that way and for Flame used Squinky Labs Stairway to give the distorted filter fx. Got some decent sounds out of them both but more out of ‘boarmadness’ , I will keep experimenting with them both. What does ‘Flame’ do anyway obviously not bought that one. What particular sound were you aiming for on ‘tinymonsters’?

With TinyMonsters I was targeting Derek Sherinian’s “Monster Lead” from the Korg Trinity and Triton workstation keyboards. I based my VCV patch on a Korg Krome implementation which sounded close as I could actually sketch out the signal flow.

Flame is a distortion module and part of the VultModules paid plug; out of the Vult free mods, I’d look at Debriatus for that sort of thing. I had looked at the Freak filter, but the independent “bite” parameter seemed to be missing. That adjusts how aggressive the filter tone is in a way that resonance doesn’t. BTW: one thing to keep in mind with the resonance in ferox regardless of whether in Freak or free standing: to track the keyboard at 1Oct/V, you need to turn the cutoff VC-in all the way up AND multiply the CV by 1+1/3 going in. Without the multiplier, it seems to track at 1Maj6th/V, and I don’t know why this is.

I’d be interested it trying out your variations if you don’t mind. I’d likely learn something, and at the very least have some different lead timbres to noodle around with.

Thanks for the info! I can provide the patches for the ‘littlemonster’ that’s the one I replaced the modules on. Can you add patches on here, I have seen other people do it!? I’ll have a go at trying to upload the patch on here! Wah hey it works!

I’m confused as to what you are trying to accomplish? Both patches I supplied are keyboard synth leads. What is the clock supposed to be doing?

I put the clock there instead of the midi module, at present my Midi keyboard doesn’t talk to VCV Rack. I wanted to make it self generating. Have I taken the sound too far from where you would like to be. This morning I have added JW Modules XY Pad, that gives it a Lfo that can control other parameters. I can provide audio of the results if you like.

Is It correct to feed Sync input only with squarewave?

It sound like you’re trying to make something percussive rather than melodic. You might try using a sequencer then from the clock. Try to understand the signal flow in the original patch though. It’s all there with a definite purpose. Those things that aren’t modulated aren’t modulated with a reason. The routing is very simple with a reason. The oscillator parameters are fixed with quite intentional tuning. The detune is intentionally set low. This isn’t a supersaw. Give a listen to the video in the first post in this list to see where I was going with this. Progressive rock patches whether from the ELP/Yes/Genesis era or something modern such as Dream Theater are very simple animals. These patches are about sounding nice and getting out of the way of the musicianship.

I do need to ask what difficulties you’re having with the keyboard though.

What are you expecting? I’ve always assumed, perhaps incorrectly, that it’s some sort of edge triggered thing. Perhaps it’s zero crossing, but I’m unsure. Experiment, find out, and tell me.

Is It correct to feed Sync input only with squarewave

Interesting - I have been looking at this recently. I always used squarewave in the past, but now that I have looked in the spectrum analyzer, I don’t do that any more.

You case use any waveform, at last with the VCV VCOs I looked at. They will “sync” when the sync input crosses zero. It doesn’t matter how fast.

I have seen that there can be more “digital nasties” when you use a typical square-wave, and less with a sin. I think it’s because the square wave has more apparent “phase jitter” due to the MinBLEP generation.

So, use what sounds good. It doesn’t have to be square (in most cases).