I am running a very simple audible instruments elements patch and using the vcv recorder module to record from within vcv rack on a cheap-o win10 laptop with just its built in soundcard.

If i record the laptops headphone output into a different computer with a mackie firewire audio interface, it sounds much better than the recording i made in vcv rack using the recorder module.

Can someone tell me why ? It seems since it is recording digitally within vcv rack, the recording should sound much more like the original patch, correct ?

I am not sure if I can help you, but there’s clearly not enough information… SO I have some questions:

I also have a problem with VCV Rec and Audio modules… Sometimes the sound gets louder if you choose 88.2 sample rate and higher… It’s weird.

Thanks for your reply.

What about the Audio Driver there?

any help would be appreciated. Btw, im quite a noob to using audacity too…

WIth similar or exact same parts of a track. I think the muffled version should lack the high frequencies. Let’s check if it’s true. And also could you try any other recording module? Nysthi collection has a stereo recorder, i think. Try this one too!

Ah!~ Important question. What is the chosen audio format at VCV record module? I mean, if it’s mp3, that probably solves it. Try WAV. If it’s WAV… Yeah… It is WAV, isn’t it? cause it’s 24 bits… Damn

I think VCV audio module has a compressor\expander hidden somewhere inside… So we probably need to compensate for it with VCV recorder module too… But that’s just speculation. What it has though is a DC blocker. And we definitely need it in the chain with the recorder unit

im starting to think the problem might be audacity playing back the recording. It sounds like its going through a filter or eq… I have really never understood audacity and trying to find answers online is difficult. Im not even sure if i should be able to choose asio in the audacity settings(and there is no asio choice there anyways) I really dont know what audio playback settings im supposed to use in audacity or if i should have the asio choice…

So to illustrate the difference DC blocker makes:

Here’s some FM drone with DC blocker on the Audio module switched ON: 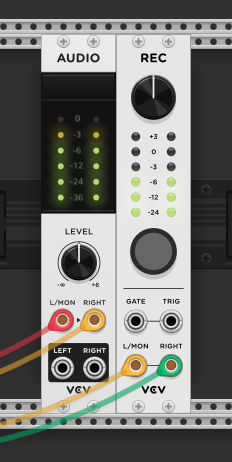 Here’s with DC blocker off: 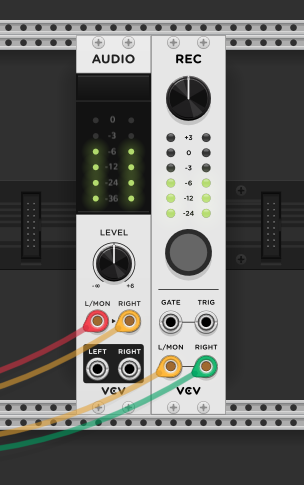 So as you see, with DC block off the output is a bit quieter and also a bit duller, cause there are extra low frequencies

I don’t think the problem is with Audacity… Could be, maybe there is a compressor that we are looking for. Something that reacts to extra low frequencies… Try DC blocker before the recorder module. It should help a little

it just makes no sense to me how a internal digital recording of vcv rack sounds so different than the original patch ! I have spent hours trying to figure this out. It sounds much better actually recording the patch through the headphone output into a different audio interface. Does that make any sense ? I would think the internal digitally recording would at least sound as good… Sorry i dont understand the dc blocking thing either. If it is “needed” as you say, i dont think i want to turn it off ?

It is needed and what I am trying to say is that you need an extra one. Just before the recording module. OR in the mixer settings. Like MindMeld mixer has this option 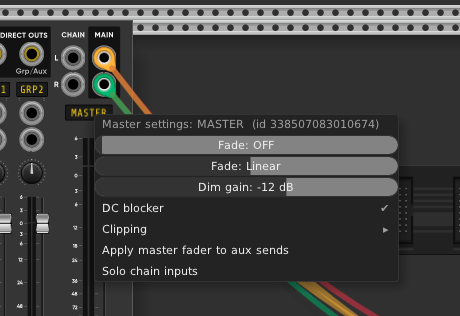 Just switch it ON and save the template… Or add a module that does that. Like here: 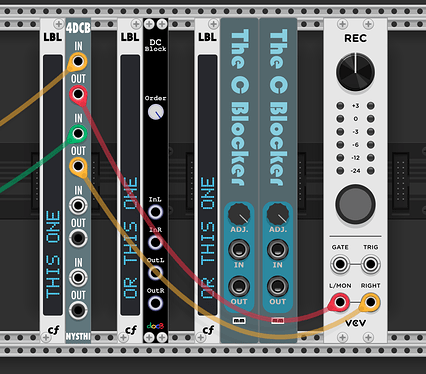 i turned off dc blocker on the audio module. no difference.

I will have to do some recordings when i get home to show as comparison examples.

Something is making the recording sound really bad… And its probably not audacity because windows media player sounds the same… First i will try different recorder module i guess.

ALSO will try adding an additional dc blocker. I will report back when i can, thank you for your help!

adding the additional dc blocker made no difference. Didnt see an “on” button for it though…

Is this happening because i dont have a usb audio interface, and just the built in laptop sound ? I thought that shouldnt matter when recording internally …(??)

There’s no “on” button. Usually there’s a knob to adjust the hipass. Alright, no difference then… What about other recording unit?

So on this laptop, internally recorded material sounds VERY different than the original when using the laptops integrated audio/headphone output.

I will try the spectrum analyzer sometime too.

Well, I don’t know what else to do then. Would be nice to hear an example though. I am not sure what’s happening. I hope someone smarter than me would help you!

I think it is related to the external routing. Like when using the Audio unit the sound is being amplified a bit. As opposed to the direct recording that is happening when using the recorder modules. And then Audacity does the direct playback… I don’t know.

I definitely believe that Audio unit does something to sound and I am not sure what it is. Limiting\compression maybe. So it appears brighter and louder…

I have had the similar experience over the years with Rack. Listening directly to Rack sounds good and also recordings (flac or waw) played with Groove Music in Windows 10 on the laptop, which sounds like listening directly to Rack. However, watching Omri Cohen or Underdog on YT in FF sounds quite much better: richer, more nuanced, more headroom etc. I thought that maybe it has to do with the dac so I put a Dragonfly Cobalt usb dac between my laptop and Sennheiser Momentum 2 headphones. It increased to sound quality for all signals - of course. Still better sound from YT in FF than directly from Rack. I have also tried to play waw or flac Rack files on my high-end stereo and the sound quality is quite poor and very different from that on my laptop (no to mention real, recorded music). My conclusion has been that others (Omri, Underdog, other musicians) have used more advanced production techniques (Bitwig, Ableton, etc.) and music interfaces than ‘simple’ recording in Rack and that makes the difference. If not, then I would love to learn how to do it better than I manage now.

Maybe Omri Cohen uses a compresser/limiter as postproduction when cutting his videos. IMO the best would be to ask him about that.

If you want to stay pure in VCV Rack, there are a handful of useable compressors and limiters in the library. I have to say it takes some time to get experience in using these (and other) mixing/mastering tools.

Well, I remember Omri used to stream a year or two ago. You can go and watch his streams and check if it sounds similar to his usual yt videos.

I was also concerned about headroom, so I decided to record only in 96 kHz 24 bit, that helped a lot, you can also record in 32 bit with a NYSTHI recorder. I can’t really hear any difference between 24 and 32 bits on my PC and with my ears (and when using sample rate higher than 96 kHz, I think my audio interface just doesn’t support 32 bits and my ears are too damaged to hear the “air” frequencies and higher, haha), but maybe you do, so try it. Well, I think you actually tried it already, so I am writing it for other people that happen to read this, haha.

A little progress here: I took the same file recorded within vcv rack and installed and played it in reaper. It sounds much closer to vcv rack playing. I think its because audacity doesnt support asio(unless you want to waste more time with it recompliling /learning python/etc…which i just dont have time for.

oh well… The other free audio program i want to try & use is ocenaudio. Problem is that it shows 1 trojan in virustotal scan…it sux

I am done with audacity though. No asio ?? no thanx If i could even close to afford it, i would get a reaper license. But i am worse than broke lately.

I haven’t used audacity for years, but you should be able to choose your driver within the program. What is more strange is that it sounds muffled when you play it using windows media player. Can you change your audio device in the windows task bar to the same one you use in VCV? In this case asio4all. It could be that windows is using a different driver for playback. An audio app will just default to windows audio unless you change it. And if windows audio is not set to asio, or whatever, it will affect the sound. Also check that you don’t have any effects on in windows audio options. If it is still not sounding the same, the problem might be the patching, could you share a screenshot of your patch? Just to rule out the possibility of some module causing problems before the audio recorder.