Thanks for the quick response! I thought maybe my Superior Drummer is buggy. I usually feed it midi from M-Audio Trigger Finger and Alesis I.O. simultaneously. In Alesis I have Hi-Hat Control and bass drum pedal connected. It is hoped that this feature will be added at a later date.

I may have misunderstood your question.

You can use two inputs, but they end up on the same channel. But if you want to play one kit using two controllers, that’s exactly what you want.

Here, I can play the same dumpad, using beatstep and QWERTY keyboard. monophonic from each input

Error spotted in the patch - see below.

Thanks for spotting that. [image] midi-polymerge.vcvs (173.3 KB) Midi monitor VST

Yes (I repeated what you showed in the screenshots. None of the methods worked. The PMR example gave at least some result. The device ( Finger Trigger and Alesis) connected to the PMR first (above the other) is working fine. Signal does not pass from the second.

Trying to make some sense of it, so I atleast can log a bug.

The negative behavior of the module is clearly visible on VCV Host - XL. There are no dedicated CV and GATE inputs here. When I select 1V \ Oct in the matrix by right click, the parameter is only assigned to one midi device. If I try to connect the second one in this way, the first assignment is erased.

I think it will be in a future version, perhaps it can help if you describe how you would like to use it, and send to VCV.

Thanks for the support! I don’t think this is a bug. I’ll have to write a request.

Edit: I think there’s a bug in PMR

It seems to me to be working OK, but maybe I’m misunderstanding what you’re trying to do:

Yes, I don’t know where the problem lies.

I press one key at a time - but I get some two-note events in the vst.

OCT is introducing an additional delay for V/Oct?

Thanks for spotting that.

Awesome! This is the most elegant solution I could imagine. True, I excluded the midi-monitor from the set, maybe that’s why I get a series of 8 notes, then the same series of “dead” notes. If I play long singles. But otherwise everything works! Velocity and both controllers! This is a real brainstorming session! Thanks for your time gentlemen!

I’m not sure what you mean (I’m not a drummer) singles? dead notes ? And i don’t have superior drummer.

“Excluded the midi-monitor” - like this ? It will work without - but I haven’t tested it much.

You have to set polyphony channels to 8 on both MIDI-CV modules. If it’s 16, eight of them will not work.

Perhaps you can share a video of the problem.

Yes exactly!) By single I mean singles strokes drum roll. Left-right and so on. Of the 16 blows on the pedals (any), 8 sound - 8 are not, then everything is repeated: 8 hits in a row sound and then 8 - no … …Clearly, I’ll correct it now. Thanks! 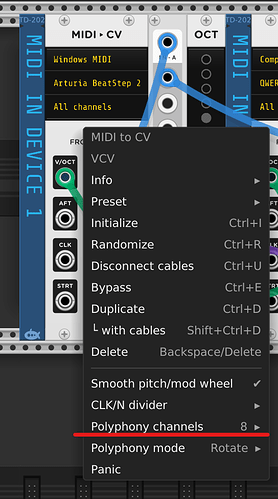 Cool, now everything works perfectly. With All Respect! Andrew.

Updated module from Grande, which simplified the circuit) 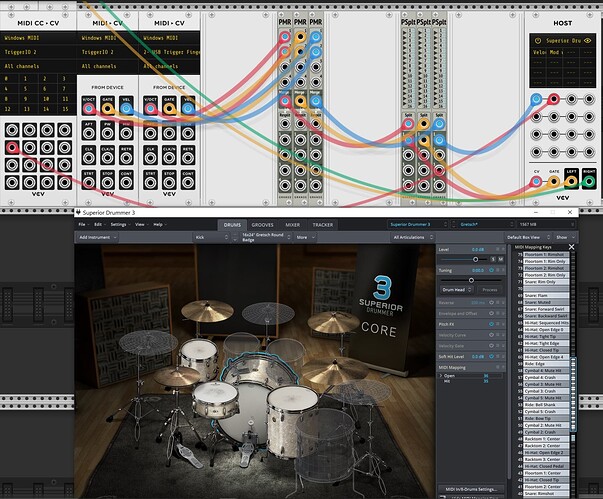 this thread is not exactly what i’m trying to achieve but relevant . i thought may be more experienced vcv people could have solution . in vcv vst host when i load reason Rack and load one of its sequencers , it automaticaly starts automatically running {sequencer} i want sequencer to start and stop when i start/stop a daw and bpm synch as well . i’ve spent lot of time figuring it out but to no avail. is it possible at all or its a missing feature ?