We have two new VCOs out now in our 1.0.9 release, and they couldn’t be more different from each other.

Kitchen-sink is a one operator FM module with an ADSR, but adds hard-sync, multiple waveform outputs, a waves-shaper, and voltage-controlled waveform morphing.

Kitchen-sink uses oversampling to control the aliasing, like most good FM oscillators. It is fully polyphonic.

Kitchen-sink also has a “hookup modulator” command that can save a lot of time by automatically adding patch cables between two instance for two operator FM. Kind of like the very clever way NYSTHI auto patches FM modules, but different.

Substitute is our tribute to the Moog Subharmonicon. It is 8-voice polyphonic, and each voice has two independent VCOs, each of which has two programmable subharmonic oscillators for a total of 6 oscillators per voice.

A built-in quantizer gives a choice of traditional equal tempered scales or just intonation, which meshes well with the scales implied by the subharmonics.

The CV on Substitute of course can control the VCO mix, but also control the divisors of the sub-harmonics, which can sound really crazy.

Substitute uses MinBLEP to eliminate the aliasing of the pulse and saw outputs.

The VCV plugin library workers must have been working overtime this weekend – this new build made it into the library very quickly. Thanks! 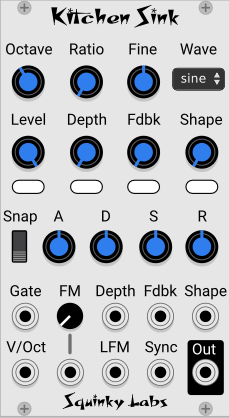 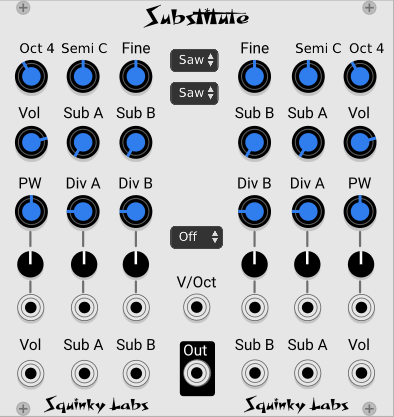 Thank you! And why aren’t you on @Vortico’s twitch stream right now? It’s great.

I am multi tasking!

Thanks Squinky Labs for the modules and the manual. I will have a read and play tonight

I will have a read and play tonight

cool. hope you enjoy one or both.

we needed a kitchen sink module, all sorted now, so we are all set

we needed a kitchen sink module

It may be a stretch to call it that. It for sure doesn’t have every feature of every VCO. But once I named it that I just liked it too much! In fact the name came from a totally different module we never finished

Kitchen Sink is superb! I know the panel is tight but is there any chance squeezing in a jack to output the envelope in a future version? I reckon that would be most handy.

Thanks Bruce, they look great! Must find the time to play with them…

The panel is tight, but that has been requested. And thanks for your nice words.

They look so nice ! can’t wait to try ! Especially that Moog like module ! this plus “divisions” from Admiral is just like the real thing

great addition to the squinky pack

this plus “divisions” from Admiral is just like the real thing

oh, cool, I had not known about divisions. Sounds like a good combo. thank you.

great addition to the squinky pack

It’s a pleasure. thanks.

Thanks to everyone who made videos using the new VCOs. It’s very gratifying to see them in action.

I’ll have one soon. It’s more of my phazing stuff but I was using the ole FM-OP and decided to swap it out for the Kitchen Sink. It’s good, though I should probably check what some of the options actually do in the manual.