Hello! As in the title, I’m interested in trying to recreate some kind of glitches that I basically have only heard in Ryoji Ikeda music (like in his albums “Supercodex” or “Dataplex”, for example) I’m not referring to any specific sound / noise, but more on the general feel of those kind of pure sounds. It’s like feeling them inside the head instead of with the ears!

I tried to start with different kind of wave shapes or noise, in very high or low frequencies and just trigger the envelopes with extremely short attack and decay. It kind of gets near there, but it’s very different, I feel like I’m not able to hear something crucial to recreate those sounds…

I know in some cases there’s very high pitch involved or very short length, clipping, very low frequency with some kind of resonance… I’m just rambling at this point. I really can’t get to make that “pure” kind of sound, and I’d love to know the underlying theory/process, not necessarily in VCV.

Any hint will be appreciated!

PS: my english is quite bad, if something is incorrect or not clear in any way please let me know, I will do my best to explain it better!

I love Ikeda, but sadly I got no idea how to recreate his sounds. I believe, he uses a lot of fm sounds and a combination of repeated and random secuences influencing each other. I may be totally wrong here. Edit: listening to supercodex again. Brilliant…

It sounds to me like he’s using samples of different noise sources… electrical chip noises of digital devices, plugging and unplugging jacks, cranked up devices with no input… that kinda stuff.

The chiptune emulations available in Rack and FM might yield some similar sounds here and there, the most important part is to sample and select little parts to be sequenced I would say.

Oh and… digital noises usually consist of pulse waves… so it might be a good idea to experiment with mixing a few pulsewaves with different frequencies and pulsewidths, maybe have them FM each other.

LindenbergResearch NO!ZER is a very good tool for straight up noise and Bogaudio PULSE is great for experiments with pulses. Those two could get you a long way.

KautenjaDSP and Bacon Music have some nice chip emulations that could yield a lot of digital noises… and I think we had a module that makes sounds from bitmaps somewhere, but I can’t find it now… what was it called?

The Module is perhaps Bidoo’s ‘Emile’ does png to sound, could that be the one? All your suggestions sound good for starting on the right track.

Yes, that’s the one. Just throw some PNGs in there and get instant digital noise goodness. Just tested it and it’s really great for that.

Ikeda has probably done a lot of work finding and collecting noises, but if you do it the right way you can make an album like that in VCV Rack in a day

make noises, record them into NYSTHI Simpliciter, chop them up with the grid functions and trigger small chops and voila: instant Ikeda

I have just created a VCV Patch using a ‘Tape Recorder’ module by Ahornberg, Pulses sources by KautenjaDsp and Bogaudio and NYSTHI Dual Random modules. Maybe not spot on Ikeda but there is a module called Ikeda by Axioma. Not used Bidoo Emile though. Would you care to see the patch on VCV Patchstorage? Welcome to the world of VCV.

That’s based on a different Ikeda, though

Thank you a lot, there’s a lot of hints, I wasn’t thinking about samples. I will try all the modules and techniques you all mentioned.

@ady34 I will be more than happy to see the patch you’ve made, thank you again.

I’m sorry, how can I find your patch in the patchstorage?

So which Ikeda is that module based on, was/is it a big family?

I have no idea, but in the manual it says Kensuke Ikeda, probably a mathematician.

Connect that, touch it.

Hey I listened it in soundcloud and looked the patch. Thank you for your help, I had never seen few modules you used.

I really like the audio you made, it’s very glitchy and interesting and inspiring for me, but in my opinion it lacks that “feeling” I was looking for.

I’ll make an example: in Ikeda’s “Data-Hypercomplex” (Link hope it’s ok to link to spotify) at the very start you can hear that double percussion sound which is very “punchy”, “clippy”, for the lack of better terms. You can here those again around 0:04, 0:08 and later in the track.

It seems like the sound is made to make the speaker (headphones in my case) react in a very direct way, like the clip you get when a sound wave starts or ends with a stepped value, like the clipping you get when trimming a sample not in the “0” value of the wave but at some higher or lower value. I know I’m not explaining it in the right way, hope someone could get what I mean.

Another example is in his “Data.Minimax” track (spotify here) at around 0:04. It’s some hyper-high frequency sound with abrupt start and end.

The sound in basically all “Test Pattern #0110” (spotify link)

And so on and so on… I hope the examples clarify better my point… Thank you to all of you, you’re very helpful!

Yeah, listening again to Ikeda’s work and thinking about samples (thanks to this thread) I immediately thought about touching the jack cable and sample it.

Ohh. Yeah that’s an interesting question. For starters - here’s a bit of the Raster Noton soundscape in a simple patch utilising a few of Plaits available sounds: 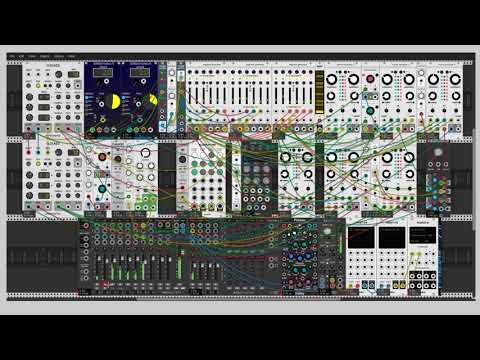 Another example… using a noise source to trigger random modulation on a variety of Psi-Op modules. 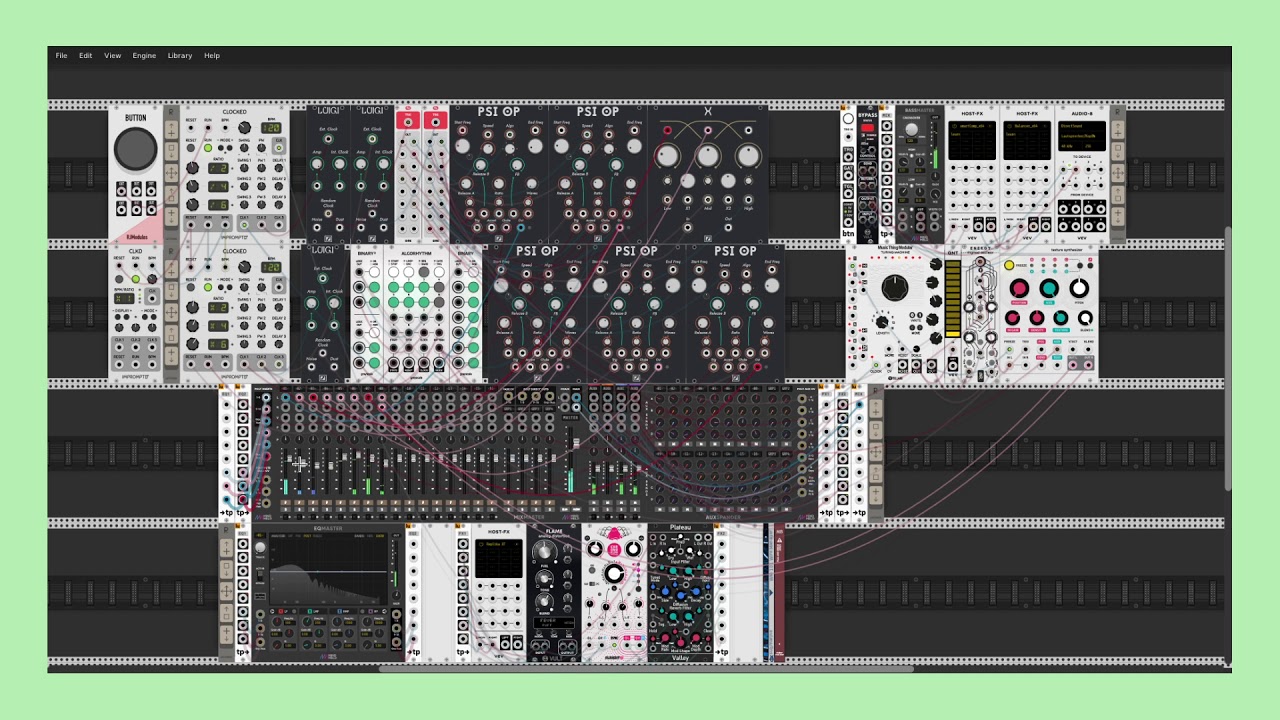 Ok. We established an initial starting point. Amidst the vast array of sounds available in Plaits and Psi-Op lie scattered a good amount of the sounds you’ll need. But finding them, fine-tuning them, making them through modulation, filters, envelopes, gates, VCAs, effects… is tedious work. Stoermelder 8Face, Strip and Transit are essential to archive these sounds… and to sequence them. 8Face saves Module Presets, Strip saves adjoining modules in a row (including their patch cables and settings), Transit can bind a variety of modules and save their states… to sequence and morph through them. Another easy example. Here I jump randomly between 3 different Psi-Op/8 Face banks: http://www.raisedasapackofwolves.de/2021-01-26%20VCV%20-%20Psi-OP%20Trig-Switch%20Presentation.mp4

If you were to grab these sounds using Low-Pass Gates, clean them with EQs/Filters and maybe saturate them with Distortion or shape them with Compression you got an endless source of clicks, toks, ploks… Ikedas music is at its core a well maintained balance between organic, vivid, varying percussion and clean, synthetic/electronic signals. The latter often reminiscent of analog electronic hardware. Wether its the beeping of clocks, morse code, sonar - the dry clicks, sirrs or magnetic disc read/write operations - the bristles of voltage discharges or the ticks of motorised analog parts as they move.

Now you need to process the sources… Envelopes:

Switches you will want to switch a lot of signals when working in sound design as well as when sequencing these sounds. Ikeda’s Minimal is stoic and repetitive in regards to trigger positions, rythm, time signature. His music is almost the opposite: flexible, engaging, surprisingly thrilling. A common approach in modern art, but rarely used in music production: Serialisation. - In serial photography a theme, an approach, a signature, a set of rules for aesthetics, amount, colors, angles etc. ties each photograph together. In exhibitions, sets of sizes, arrangements of groups, distance between each work, its framing and lightning follow clear conceptual rules as visual formalisation of the invisible concept. (see: Bernd & Hilla Becher) Ikeda works similar: Sounds are grouped by their characteristics, groups are assigned to certain time signatures and divisions. They play a certain length at certain moments. When a new group of sounds is introduced, they will repeat at a set interval at least often enough to give a comprehensible measure of expectability. The aim is focus. Comparability. Transparancy of its inherent logic. Particularity of order and interrelations. Here Sounds are not bound together into harmonies, narrations, melodies, chords, movements… how music and language usually operate. Streams of similar, related or identical objects run in parallel. Each at a set speed, with objects placed (clearly apart) at a set interval.

LOOOOOONG STORY short and back OT: Switches. Some sounds of Ikeda clearly come from semi-random sources and are derived by using semi-random modulation. They do not repeat. Some of which run every 2nd step. Many others come in groups.

If you skip the Digitakt/Digitone stuff there’s a lot of FX, glitch percussion and broken beat patches on my channel… many sounds in these could be repurpoused to get the sound you want:

its more about the arrangement than getting the sounds tbh. Ikeda is a tough nut.

Found this in my collection: http://raisedasapackofwolves.de/MorseSamplePack.zip I suspected that Ikeda uses Morse… listened to a few Samples… and he does.

Quickly zipped what could be of use. Might be some duds in-between. vcvmm are STRIP presets - vcvss are 8Face Presets. Just a ton of collected sounds for Glitch Drums, FX, Stabs, Drones and Pads. Mostly Drum/Percussion. http://www.raisedasapackofwolves.de/STRIP8FACE-JohannAsbjoernson.zip

Thank you to find the time to write this! A lot of inspiration!

The link to serialization and the Bechers’ work is awsome, I’m a professional photographer so I can understand what you mean and this helps a lot in the arrangement, thinking how to compose those sounds in patterns.

Just found this module set up on Patchstorage, maybe this will help or not, have a look at it anyway. Also the video is interesting as well, Enjoy.

You said “It’s like feeling them inside the head instead of with the ears!”. I believe this effect Ikeda achives by very quick ping-pong like pans between right and left channels. I just listened to a few parts of the above mentioned album Supercodex and all i hear is that any sound coming from one channel is repeated on the other channel with a rather short delay (guessing 2 to 5 ms). To me it seems to be the method used throughout the whole album to create that effect you hear. I believe the method is completely independent of the type of sound itself.