Thinking about purchasing the ES-9

Is that the best way to connect external eurorack gear to vcv rack? I am running Mac OS Monterey on Mac Mini M1, would it work well with that configuration?

It’s a usb audio device right? Isn’t there a lot of latency with USB audio? How does latency affect thigns when going to and from the real vs virtual eurorack spaces? Like can you make a trip out then back in then out again and back in and everything still be in sync?

If ES-9 is the one to get, and works okay with my setup, where should I buy it? Is it currently available? I’d buy it used that’s fine, I prefer used to save money if possible, if it’s in good condition.

I can’t help you with purchasing info, but as far as the latency goes, you can run clock out of VCV to your gear and run another master clock that is delayed for the stuff in VCV to get things to line up better. There is at least one @Omri_Cohen video on Youtube that demonstrates this.

I like my ES-9. No latency issues that I have noticed

Same here, it’s a great device to use with VCV or any other app that sends CV. It works fine on my M1 laptop and appears as a native audio device (no drivers required). The mixer app doesn’t have the best UI but it works well and allows you to manage the inputs and outputs.

I have a separate soundcard to record so I don’t do round trips as you describe it. I would probably be a bit careful of taking the audio out and back into VCV as you will have latency. However, it’s not always an issue and it really depends on what you are trying to do… I’ve used it to send clock out to trigger hardware modules and record audio back in VCV with no issues whatsoever. One scenario where it might be a problem is if you’re trying to set up some parallel signal processing where phase becomes a concern. The workaround is to try and avoid those scenarios

I used it for a year; great device. However I struggled to make it work with my other dedicated soundcard that I have; eventually replaced it with Optx ADAT converter, since my soundcard has ADAT in/outs. Notice that optical ports in ES-9 are SPDIF and not ADAT ones (only 2 channels instead of 8).

@JenniferG, I get great results from my ES-9 on Win10 and I suspect it’s just as solid on Macs. It’s a really excellent device (especially in Rack V2 now that you don’t have to do a special compilation to get the expanders to work

Regarding sourcing one, I don’t know where you’re located but if it’s in North America (or you don’t mind international shipping) you could check out Control in Brooklyn; I can vouch for them as a shop, and they seem to have a few available now. (ES-9s tend to sell out pretty quickly so I wouldn’t wait too long). FWIW, the units I’ve seen float by used weren’t much lower than a new unit–in fact, some of them were priced higher in an attempt to capitalize on scarcity. I think it’s fair to say that there’s not a robust used market for these that goes significantly below retail.

One scenario where it might be a problem is if you’re trying to set up some parallel signal processing where phase becomes a concern. The workaround is to try and avoid those scenarios

That workaround will work

but one of the great joys of hybrid modular is doing parallel processing on hardware. Fortunately, Rack makes is very easy to use sample delays to get things sync’d up perfectly between the software and hardware side no matter how complicated what you’re doing is. Once the sample rate and buffer settings are chosen, the latency won’t change, so it’s really set-and-forget.

You can also pull a sync’d reference track by multing a signal (in Rack) to two outputs on the ES-9 and then patching one of those outputs to an ES-9 input, then the other one to a chain of devices and back into another ES-9 input. As long as you’re not routing the “wet” side through any latency-inducing hardware devices (i.e. digital ones with their own A/D and D/A loops) the “dry” ES-9 input and the processed one will be perfectly in sync. If the re-recorded dry track still sounds fine after one D/A=>cable=>A/D loop, you can use it directly; or, if you record the dry track within VCV as well as the dry looped track and the wet track, you can sync up the in-VCV track with the dry looped track later and then replace it.

If ES-9 is the one to get, and works okay with my setup, where should I buy it? Is it currently available? I’d buy it used that’s fine, I prefer used to save money if possible, if it’s in good condition.

Pricey, but I guess the market has few alternatives.

Yeah, it’s a hefty expense, but in addition to being the only interface I’m aware of with multiple DC-coupled inputs, it’s pretty incredibly feature-packed; a really good general interface, has balanced line out, a ton of inputs and outputs, incredible extensibility with the GT and CV expanders, and it’s an extremely capable digital crosspoint mixer which can work when not USB-connected. So in addition to its USP you’re getting a TON of bang for your buck.

the only interface I’m aware of

There’s an ADAT DC-coupled I/O interface too.
NOTE: only outputs are DC-coupled

I’m still playing with microcontrollers and OSC - easy to find a microcontroller with DAC and ADC with plenty of resolution. solder to some opamps, and you can have DC i/o for not that much money. And all the channels you want (and the throughput of OSC on USB permits)

Haven’t measured throughput or anything - but it’s something to consider (if you DIY electronics). I don’t know of any commercial offerings of OSC CV I/O.

The sample rate of trowaSoft cvOSCcv is low (100 Hz), but easy to change in the sourcecode. I tested 1000 updates/s - works fine with 16 channels of float.

8 channels of float over OSC: 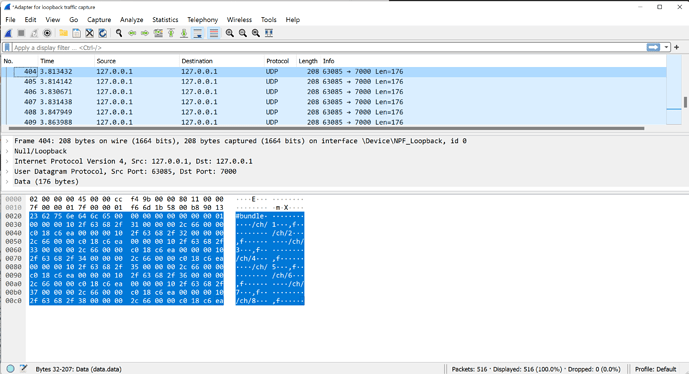 It does polyphonic cables too - transfer 16 CVs on one OSC address. 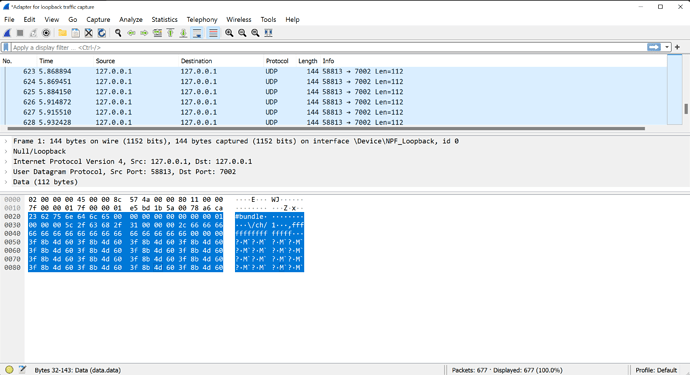 Common MCU dev boards are capable of 12 Mbit/s USB transfer. divided by 1152 bits per one 16 channel OSC message gives a max rate of 10.416 16 ch OSC messages/s. Bits are added for transfer on the USB serial. I have not measured the real maximum for OSC<->MCU.

Good point (and Os from Expert Sleepers also makes the ES-3 and ES-6, which together ~= a Optx). I was thinking of standalone interfaces, but if you’re already up and running with an interface that has ADAT connectivity, these are good options.

Additionally, the Expert Sleepers ES-7 can go on to an ES-40 and give you DC-coupled input over coax S/PDIF, but just two channels’ worth.

I have one and use it with Bitwig and VCV in Ubuntu… If you can’t find a one then email expert sleepers where in the world you are, they will probably advise when and who will be getting stock.

I think it’s fair to say that there’s not a robust used market for these that goes significantly below retail.

The used market for Expert Sleepers appears as people upgrade to new offerings! I’ve been super-skint and finally bought a used FH-1 when FH-2 was released and an ES-3 when ES-8 was released. Everybody’s been pressing Os to make direct USB interfaces since the beginning, so demand for these is strong and sometimes deals can be found for the earlier ones.

My latest box is my first one without Firewire, so my MOTU>ES-3 setup is finally getting outdated. Thinking of trying to make Lightning and USB-C to ADAT converter myself from a Teensy but I’m over my head. The effort will keep me busy until I can both afford and find an ES-8 and/or ES-9.

I was looking into this one and I read on Modwigglers that while the outputs are DC Coupled, the inputs are not.

I believe the original intention was that both would be DC Coupled but iirc they ran into supply issues or something like that and had to ditch the DC Coupling on the inputs in order to get the module released.

It may be that the DC coupling on inputs is added in a later version.

Just something to bear in mind if you want to run CV from hardware into Rack - which you may well want to do to take advantage of Rack’s scopes etc if nothing else.

Thank you for pointing that out.

The used market for Expert Sleepers appears as people upgrade to new offerings! I’ve been super-skint and finally bought a used FH-1 when FH-2 was released and an ES-3 when ES-8 was released.

Important clarification, thanks! Yes, it’s just the ES-9s that don’t go down at the moment. The older stuff is still in good supply and even new it’s often marked down significantly. I’m looking into an ES-7/ES-40/expanders configuration (since it could work with the ES-9 via opto/coax conversion, or with other interfaces) and seeing some very nice prices on those.

while the outputs are DC Coupled, the inputs are not.

Oh no! That’s a big downside in modern hybrid systems. Thanks for noting. If anyone wanted ADAT input the Expert Sleepers ES-6(/ES-7 for two more inputs) is definitely DC-coupled.

Is there something as good as ES-9 for half the cost? $650 seems like a lot of money for what it is no? I mean audio interfaces aren’t that expensvie these days are they?

es-9 isn’t just an audio interface, it can also act as a mixer with external level control. I don’t think that adds enough to justify the price, but I personally am happy enough with mine that I’m glad I made the investment.

the dc coupling is amazing, though, and while I haven’t found software that manages to use every feature, I’ve written enough that it’s getting close to using every feature (still waiting for my midi expansion for it, at which point I’ll build some midi-translation hardware and control its internal mixer with my launch control xl)

If you really don’t need all the ES-9 features or ins/outs then as mentioned above I’d recommend hitting up Reverb or similar secondhand sites for used ES-3 and ES-6 modules. Did that recently and got both for £240 combined, less than half what ES-9s are going for and that got me 6 ins and 8 outs via two ADAT ports.

The ES-9 is a great interface and good for a portable system but In some ways it is not the most flexible solution for studio use. What if you want a Mic input to record some vocals? What if you need more than 8 CV outs? (I know it has more than 8 outs but only 8 are really usable for sending signals to modular hardware).

There are other more flexible solutions - interfaces with lots of ADAT in/outs like the RME digiface, and the ES-3/6 combo will work well with those. You can then add more ES-3/6 if you want and/or an AD/DA converter like the Behringer ADA8200 for Mic and line inputs from other synths etc.