The House of GEODESICS

Thought it would be nice to have a single page with Geodesics related things: news, tutorial, music.

Feel free to post your experiments! Patches, videos, music, trick that we have not thought about, questions.

I tend to use Energy a lot but It’s been a while since I used your other modules. I think it’s because I depend on polyphonic stuff a lot. If Ions or Entropia where poly I’d be using them this very moment.

Ages ago, when I was still streaming I used the easter egg in your blanking plate and it got that but of the stream silenced in the VOD.

Blackholes and Pulsars are also polyphonic

For IONS and ENTROPIA, we discussed how we could make them polyphonic but we have found a satisfying concept that could be easy to understand. We could use a poly clock input, but the knobs would have the same value for all channels

How would you picture it? Meanwhile, you can combine the two out of IONS for a duophonic patch, of send the output into a mono poly offset and a quantizer to make it a chord sequencer

I knew about Black holes and Pulsars.

Ions and Entropia would be really useful if they worked like Bogaudio ADDR-SEQ and PGMR. I use ADDR in this (https://www.youtube.com/watch?v=HjkPNAdEqKo) patch with clocks set to 120 and 121 bpm for that Reichian effect. So, yes being able to use a poly clock and have several identically configured sequences but with different times is really interesting and can get useful results. If I wanted more than one sequence I’d just use multiple sequencers and merge them.

Jeez, did any of that make any sense?

Anyway, thanks for the modules.

Interesting! The problem with our sequencers is that they were thought to be just at the edge of wierdness and complexity when VCV was mono… Now that VCV does polyphony, we have to be carrefull that this extra dimension doesn’t break the very thin ice of unserfriendlyness on which Geodesics is skating.

Implementing polyphony on sequencers such as entropia and ions,with their multiple clock input, their auxiliary cv inputs, their probability choices, variable lenght, this is both extremly challenging to make it happen with every feature of the module, and challenging to have a complete understanding of what is going on, at least for us

Geodesics is two years old! On this occasion here is an anniversary update with some small but useful enhancements, a new shirt with the complete collection, and some big news to be announced in a couple of days!

Link to the new shirt: https://shop.spreadshirt.net/pyer/

New in 1.2: FATE is polyphonic! Experiment encouraged! – ENERGY has two half LFO mode… to make anything between a VCO and an LFO, clusters of audio rate shakes lost in slow waves, semi random modulations or even tremolo on VCO – TORUS filters has been enhanced thanks to Marc Boulé’s experience within Mindmeld. A 12db mode is available for more sound design oriented result

As always Geodesics, is available for free. If you want to support us by looking awesome, feel free to have a look at our t-shirt shop. If you are not the kind of person who wears clothes, a beer money donation in the VCV library is always welcome. If you have drank your beer already, publish and share the music you are making, nothing makes us happier! 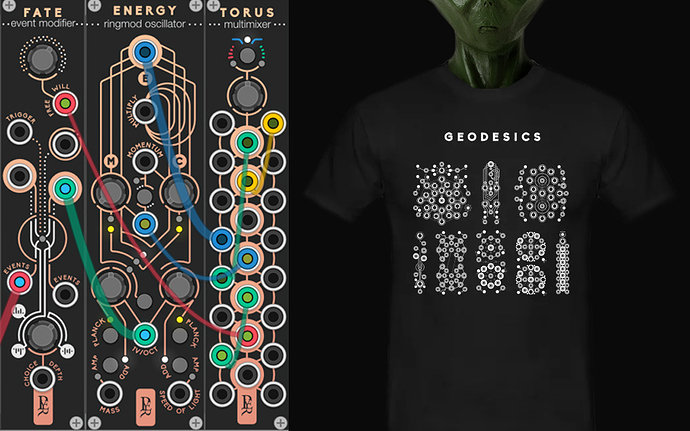 Love the way you frame the problem of the thin ice of user friendliness!

Your way of talking about polyphony in this thread made me wonder about Fate’s potential as the vehicle for bringing geodesics magic to poly sequencing. … … Aaaaand the new update makes Fate polyphonic!

Hurray for Geodesics’ way of scouting the boundaries of module design!

I’m not at all worried about this personally. I don’t always want to be able to predict whats going to come out. Particularly when I put several, very different, clock values in. I can understand that it’s difficult to code, though. 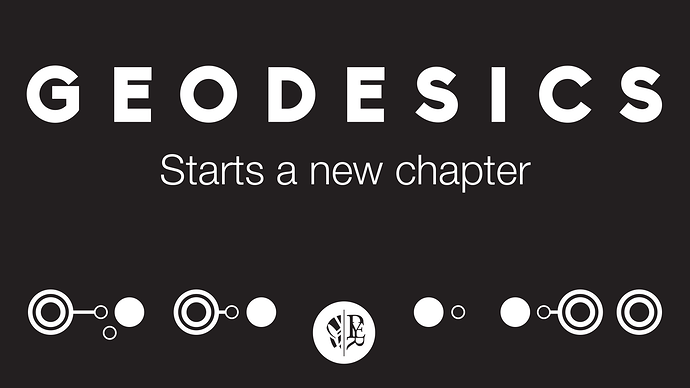 Geodesics is at a crossroad

Short version: Geodesics is taking a new step on its road: The Geodesics collection will not be updated with new modules or new features anymore. It will be kept compatible of VCV. The Geodesics project will continue in VCV Rack in a new shape and a new team…

Where should I begin?

Mexico, 1952, I was a young student in the archeologic expedition to the tomb of Maya emperor Pakal I. The carved lid covering its remains describes a kind of spaceship…

Maybe later: Muncie, Indiana, 1977 I can’t stop drawing double circles in my matched potatoes since the night I have seen that bright light flying over my truck…

Or a bit later: Belgium, July 2018, I made a user manual for VCV modules that didn’t exist. As most designer, I can’t make a damn thing by myself. I asked for help in the dev group and received heartwarming answers from the great community of third-party developers.

Montréal Quebec, few weeks later, The Geodesics modules started to be shaped by the most capable hands of Marc Boulé, founder of Impromptu Modular, co-creator of Mindmeld and the portable sequence concept.

Github, August 2018, some of you guys and gals found our beta version and you were publishing better pieces of music than I ever made myself. This feeling has been the most fulfilling in my musical life for now.

During these last two years, we created 9 modules, and you created much more pieces of music involving this strange collection.

We also had a lot of encouraging inquiries for more advanced modules and hardware versions.

This is the road I want to take for the future of Geodesics. Working on more powerful VCV modules, as a commercial project to help the dream of a career as musical tool designer and fund what could become a first batch of Geodesics Eurorack modules.

Marc is currently running 3 collections with the most used modules in VCV (Clocked, Mixmaster). Such an involvement in the VCV community is incredibly time consuming and so would be this new stage of the Geodesics project. Therefore, Marc understandably decided not to continue this path.

It was a real pleasure to work with Marc, who brought life to a user manual to make this crazy collection of modules! thanks to him they exist and thanks to him, they are relevant in the VCV Rack universe! If it was up to me, they would be a bunch of space related nonsenses!

We decided to leave the Geodesics collection as it is. Every donation for it will continue to be spread equally. It will be kept up to date, and who knows, maybe one day it will grow again, but it will stay alive as long as it finds a place in your music.

Thank you very much for these two years of support in any form that you made it!

July 2020, the future of the Geodesics on VCV Rack is currently being casted in the deepest abyss of Github by the darkest god of the VCV mythology… I can’t wait to tell you all about it!!

Hm, there might be tiny hint in the picture…

Hm, there might be tiny hint in the picture

Is that half of the Vult logo down there?

It would be consistent with “darkest god of the VCV mythology”

it will be a Leopier production, I guess

Ohhh this announcement definitely deserved its own thread

Thanks a lot Pyer & Marc for all the great work and very inspiring modules you guys created with Geodesics.

First of all Pierre and Marc: Thanks a million for the brilliant plugin that is Geodesics! It really is great and I’m so happy to hear it will continue to work with future versions of Rack.

Secondly, Pierre: Sounds very intruiging. Personally I would love a “Fate” in Eurorack, I don’t know if something like it exists and it might make a great starting point. I would also love an “Energy” in eurorack, oh boy. You have future customers waiting

+1 great modules, thanks to all involved.