Here’s a great video from Instruo with some fairly nuts modular sounds: 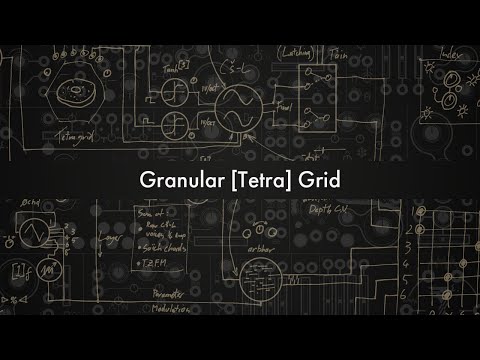 A big part of the patch is the Tetragrid:

The Tetragrid is fundamentally 6 oscillators configured as 6 CV/gate sources. Connecting the triangle touch points on the playing board with magnet pieces or a finger will interconnect modulations between these 6 oscillators. Placing magnets in sweet spots can produce consistent repeating rhythmic gates from the various outputs.

I wondered if we could create something similar in Rack, using a matrix mixer like Intermix.

Just a whacky idea really, haven’t done any work on this yet. Any thoughts?

Well I have used Intermix in the past with loads of FXs and produced unholy racket if I remember correctly! So how would this work then in Rack? So Tetragrid sounds like it is circuit bent then or that’s the concept{?}

You any idea how to start this? Interested to have a go and work with you on this.

Well, I have other projects I want to finish before starting this but…

DISCLAIMER: I have no idea how to actually do it!

I would start with patching six VCOs into Intermix, then looking at all the FM/Sync inputs. Maybe you’d need one Intermix for the audio and another one for mod inputs. You would need to route some feedback in for the FM ideally, and probably some attenuation on that so it doesn’t get out of control. Just a thought at the moment… 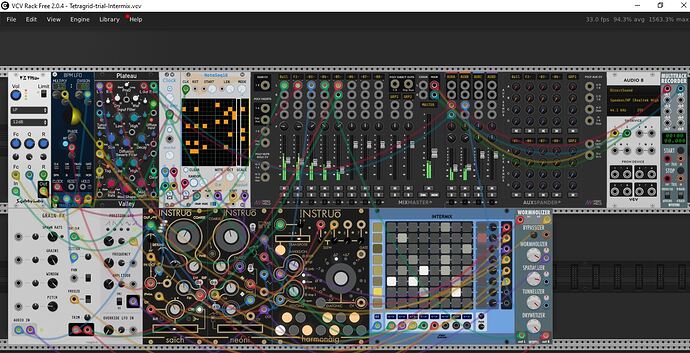 I wondered if we could create something similar in Rack

Mmmmm…quite hard to get my head around the conceptual workings of this construct of crossmodulating fixed frequency oscillators (yes, two of them can be modulated) in neural network topologies, resulting in this kind of unpredictable and unstable behaviour (but seemingly also states of relative stability).

I did some reading on workings and construction. https://www.aimoscampa.com/4d-m8 http://synthmall.com/portDOCK/wesleyanTHESIS.pdf#page=72

Even though this oscillators have a fixed frequency ( dictated by the value of the cap ) , just by having 3 or 4 different cell groups you can get ALOOOT of modulation points and generate quite complex rhythms

the beauty of it is that the circuit is not really stable and takes some time to settle down and it glitches on some occasions!

Even and Odd cell groups have different behaviours: even ones are stable, while odd ones tend to feedback resulting in chaotic and ultrasound behaviours.

It might be the behaviour of this system relies on specific physical characteristics of the physical components and connections involved.

Might be the construction and particular ‘oddities’ do not easily (or not at all) translate to the digital modular world of VCV Rack (e.g. where things do not happen ‘instantanious’ and ‘inputs’ cannot be ‘outputs’ at the same time and signals can not spiral out of control into hypersonic territory and back again).

I don’t even know where to start on this one…

I would start with patching six VCOs into Intermix, then looking at all the FM/Sync inputs. Maybe you’d need one Intermix for the audio and another one for mod inputs. You would need to route some feedback in for the FM ideally, and probably some attenuation on that so it doesn’t get out of control. Just a thought at the moment

Some time ago I did patch up all inputs and outputs of 4 “FM” operators (including their feedback loops). And then modulated the input/ouput levels (both as ‘modulator’ and/or ‘carrier’) so that it would eventually transition through all permutations (‘algorithms’), and all input/output levels, including all possible feedback loops.

I was sort of expecting to ‘blow up’ some input real soon, but after setting some limits, it would happily run sort-of-smoothly, gradually transistioning from one state to the next.

Yes it would generate FM Noise in case of ‘perfect storms’ (cumulative modulation), but never ‘sudden death’ or some other ‘unrecoverable catastrophe’.

But, I did not (inter)modulate the frequencies (V/Oct) of the individual oscillators in this cross- and selfmodulating network. Maybe that would result in some of the unruly behaviour of the TetraGrid (although based on totally different concepts).

I think I have something: 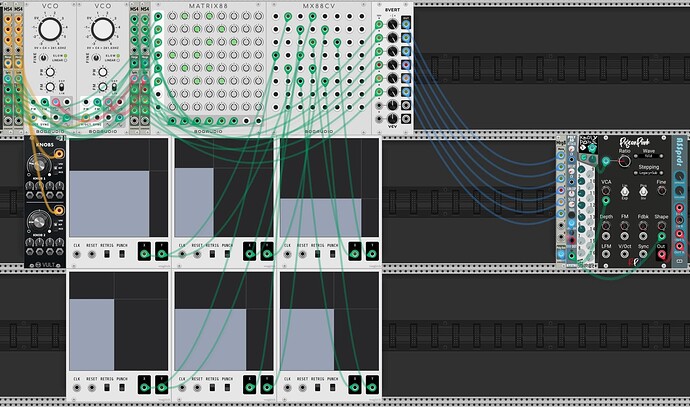 Two VCOs in LFO-Mode - each with 3 channel polyphony - so six different Oscillators. The general speed of the left one is controlled by knobs upper knob and the right VCO with the lower. FM-Amounts are controlled by Bogaudios Matrix88. I tried to imitate the magnets with 6 X/Y-Controllers. Those are controlling the FM-Amounts which I assigned in a crossover-style. Here I am using the Square-Outputs to generate gates, but changing the red cables to another output would result in different waveforms on the 8Vert-Outputs.

I am triggering here just 6 different notes on the pigeon plink, you could use the outputs for whatever you like of course.

Edit: Still working on the looping / pattern / repetitive nature. I think I need another VCO or LFO with reset, V/Oct and FM. Hm…

I have this feeling that an approximation can be constructed using a crssmodulating FM network. But using a wide modulation range from 0 Hz to as high a frequency as the oscillator used allows for.

In the original concept frequencies could spiral into hypersonic (Mhz or theotically infinity?) range, where it would then be “downsampled” to get it back down into audible audio range (compare: bat detector). Which might be compared to samplerate reduction/aliasing? Aliasing in itself is effectively a divide down of the Nyquist passing frequencies involved (divided by the intended frequency DIV Nyquist, being some integer number).

At least…that is my current understanding…

I don’t yet see how to get a TertraGrid(-ish) neural network working in VCV rack. Even without the added complexity of the dynamic interactions to manipulate the ‘synapses’ in the ‘neural network’.

Intuitively the key element in the solution is in the bit about the behaviour of the even and uneven numbers of ‘neurons’ in a group. Where odd numbered groups end up in a pardoxical/impossible resolving cycle of conflicting states, spiraling out of control. And even numbers tend to resolve to a more stable state.

But again…I can’t yet get my head around it… Three Neurons tangled together in a feedback network of chaos. Panel by jk.

I set up some quick and dirty arbitrary (cross)modulation and feedback loops.

Fiddling with mixer sliders, Genie knobs and LFO frequencies and modulation depths sure give you all sorts of sort of stable repeating patterns. Where AM (sum- and difference frequencies) and Feedback can yield very complex and high frequencies at times (aliasing and all). They can go way above the input LFO frequencies which seem to give the best results when ranging from several Hz to some 200 Hz.

After some fiddling results are reminescant of TetraGrid output. On the Oscilloscope the construct even shows non-square (curved) shapes. Just like TetraGrid generates. Even though everything is based on square oscillators (in case of Tetragrid astable multivibrators).

Using submixers (e.g matrix mixer) you can soon create much more complex cross modulating feedback networks with something like GENiE as a central neural processor.

Definitely fun to experiment with.

Here I go again, trying out Genie on Instruo Saich and then sending it to Squid Axon. Not sure it sounds anything like the Instruo patch mind. Not tried Matrix mixer though.

Thanks everyone, some interesting ideas here which I’ll check out when I get a chance. Not sure where the ‘neural network’ came from, my understanding was that basically the Tetragrid was just a kind of patch matrix for cross mod with a funky interface using magnets. However, anything that makes messed up sounds is cool with me!

Yeah, the neural stuff was too “WTF?” for me, and I feared that not watching to the end of the instruo-video was a fault on my side. When I have time I will watch it in full length, my take of the tetra-grid was after watching the first explanation of Jason: “Here are two controls for Speed, and the FM-routing is done with the magnets, and the outputs are essentially gates”.

Nevertheless, my Patch has brought up a few interesting patterns for me.

That patch looks good, I’ll check it out later. Also, I somehow missed this:

Algomorph, the morphing multi-state FM algorithm router and visualizer, has recently received a round of updates and is now all but ready for release. Barring the discovery of any showstopping bugs, most all that remains on my to-do list before release on the Rack library is to write a proper manual. If you are new to this module, check out my write-up for the first Beta over here. Builds for Linux, Mac, and Windows can be found on GitHub. This latest update includes an improvement in UI clar…

Looks amazing for FM, although I envisioned something that would do AM as well, or even cross sync.

Looks amazing for FM, although I envisioned something that would do AM as well, or even cross sync.

Basically AlgoMorph ‘just’ routes signals. Which you can use for whatever purpose.

I think AlgoMorph is a brilliant and promising solution to reduce complexity by offering an abstraction layer to manage (and crossfade between) permutations of complex networks.

If you feel limited by AlgoMorph’s 4 x 4 networks and the almost 2000 permutations, you could interconnect multiple instances of AlgoMorph to get (even) more permutations and (even) more complex networks/algorithms.

And yes, many of these routing options are very usefull to setup FM/PM algorithms. Which is otherwise quite a tedious process in modular, using matrix mixers and many cables. Especially as the number of operators and therefore the number algorithm permutations (possible (inter)connections) increases. Also, you will soon lose oversight due to the resulting cable spaghetti. Even for a 4 x 4 network (with some level control for all I/O, vca/env/lfo).

AlgoMorph is almost there in VCV Rack 2.x…

A test release (v2.1.4) of the source code for Delexander Volume 1 is now available for testing, for anyone able and willing to compile for themselves. New since v2.0 is a significant new feature: the Carrier Sum output can now perform an average rather than merely a straight sum. In fact this is now the default behavior, though old patches will remain unaffected. Both options are available via context menu. [image] [image] I think that this makes more sense in the context of a mixer such as…

Another fun thing to generate crazy but repetitive (pulse/square) patterns/pitches from is to use PLL.

Cutting loads of corners, a PLL will desperatly try to get and keep in sync with an input signal, using various strategies.

There are many ways to connect this up. But (with TetraGrid in mind) feeding it some LFO rate repetitive pattern and introduce a feedback loop seems to be the fun bit.

I forgot about the PLL PWM and PLL VCO Frequency knobs. The PWM…well…determines the pulsewidth. The VCO Frequency has a profound effect on the behaviour in sense of the generated pitches.