A test release (v2.1.4) of the source code for Delexander Volume 1 is now available for testing, for anyone able and willing to compile for themselves.

New since v2.0 is a significant new feature: the Carrier Sum output can now perform an average rather than merely a straight sum. In fact this is now the default behavior, though old patches will remain unaffected. Both options are available via context menu. 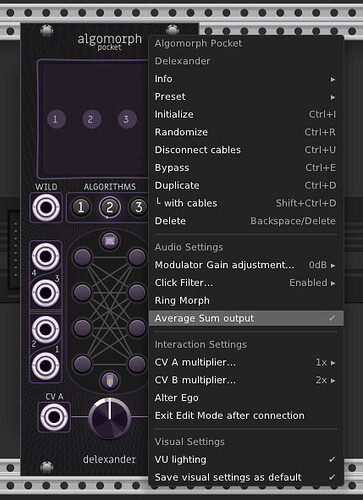 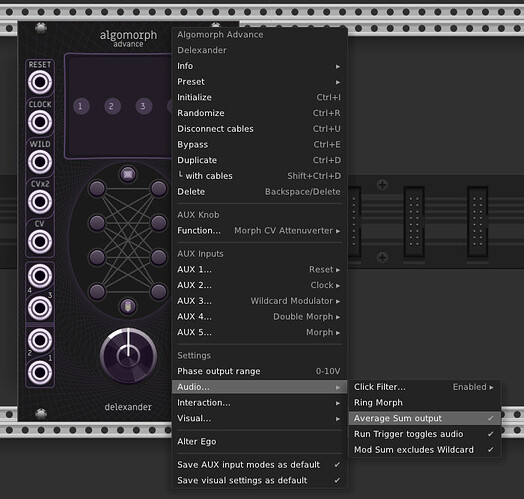 I think that this makes more sense in the context of a mixer such as this that is facilitating FM synthesis (i.e. an FM algorithm). To me, the addition or removal of oscillators to/from an algorithm is more-often-than-not intended only to modify the timbre of the end-product rather than changing its amplitude. I think it’s fundamentally different from adding an instrument to an ensemble, for example.

This also applies to the Modulator Sum output on Algomorph Advance, and I think it also makes that output more interesting.

For both the Carrier Sum and Modulator Sum outputs, this averaging is performed based on the current morph-state (so if you are morphed halfway between a 2-op and a 3-op algorithm, the average will be correctly calculated based on a 2.5-op algorithm) and it is therefore also polyphonic.

Feedback, feature requests, and bug reports are welcome as always. Happy new year to everyone.