Algomorph, the morphing multi-state FM algorithm router and visualizer, has recently received a round of updates and is now all but ready for release. Barring the discovery of any showstopping bugs, most all that remains on my to-do list before release on the Rack library is to write a proper manual.

If you are new to this module, check out my write-up for the first Beta over here.

Builds for Linux, Mac, and Windows can be found on GitHub.

This latest update includes an improvement in UI clarity which also greatly enhances live performance potential, as well as some visual polish in a few different areas of the panel.

The most important new addition since the first beta is an interaction redesign regarding “Edit Mode” – the state of the module when the user is actively creating or removing connections from an algorithm. Before, Edit Mode was somewhat more ephemeral and less clear of a discrete state from a user’s perspective.

To me, a nice typical flow seems to be entering via the Operator buttons and exiting via the Edit button. You thus enter by getting right to business, and exit from a familiar and consistent location.

Sometimes it is also nice to enter via the Edit button. This way, the module sets the Edit Algorithm to whichever algorithm is currently being heard the most, even if that isn’t the Base Algorithm. I think of this as tactical editing of adjacent algorithms.

The current Edit Algorithm is now distinct from the current Base Algorithm, which is what decides which algorithm sits at 12 o’clock on the morph knob and 0V at the Morph CV input. Previously, changing the Base Algorithm was all the Algorithm buttons could do.

Now, while in Edit Mode, the Edit Algorithm can be freely changed without affecting the current Base Algorithm. Upon exiting Edit Mode, the visual state returns to what it was before entering Edit mode: displaying what is currently being sent to the Modulation and Sum outputs, including influence from the Morph CV input and Morph knob.

As a live performance tool, this allows you to do something like create a constantly morphing drone with an LFO at the Morph CV input and then edit the algorithms live without the Base Algorithm (and therefore the Sum and Modulation outputs) jumping all over the place. I’m excited for the potential with this feature!

Algomorph now supports Rack’s built-in randomization function. When the module is randomized, each of the three algorithm slots are filled with a random valid algorithm (eg. at least one carrier).

Additionally, if Edit Mode is active, the randomization function changes to only affect the current Edit Algorithm and not the other two. Tactical spaghetti, meet wall.

In the images above, you may have noticed that the dot lights on the module have been replaced with rings around their associated buttons. This change allowed for improving UI clarity, widening the size of the connection area, and shaving off 1HP from the module all in one fell swoop!

Further, the new ring lights for the Operator and Modulator buttons and their connection lines now act as VU indicators for their respective inputs/outputs. The module’s screen itself now has a backlight whose brightness tracks the signal at the Sum output; the brightness is reigned in so as not to be excessively flashy, but rather just enough to make it feel alive I think.

If you prefer a more static look, the VU lighting can be disabled in the context menu.

About all those lights… Algomorph now also fully supports the Modular Fungi Lights Off module.

If you like, Algomorph is also available with glow-in-the-dark panel ink.

This can be enabled from the context menu.

Also added since the first beta release are click filters. (Thanks @VCVRackIdeas for the request!) These protect from audible clicks/pops when the Base Algorithm is changed via the trigger input, as well as from abrupt changes at the Morph CV input. You may want to disable the click filters when using audio-rate modulation at the Morph CV input; this can be done from the contextual menu.

That sums it up for this update. Thanks for reading, and thanks in advance for any testing and feedback!

In an earlier thread, I mentioned ZZC Clock’s ability to enable circular morphing in Algomorph. While that used to require a -5V offset to the phase/morph CV, the latest version of ZZC Clock released today now has a right-click option for bipolar phase output. Thanks @zezic! 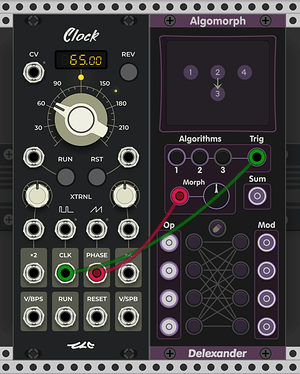 Not too long ago, I discovered the Submarine PO-204 from @carbon14. This module packs four oscillators with variable wave-shape and linear FM input. Add one or two of the new EN-104 and you’ve got quite a nice combination with Algomorph.

Here’s a bit fun with the PO-204, two EN-104s, a ZZC Clock, as well as Regen Modular Frames sequencing pitch, waveshape, and the ratio of operators 2-4: 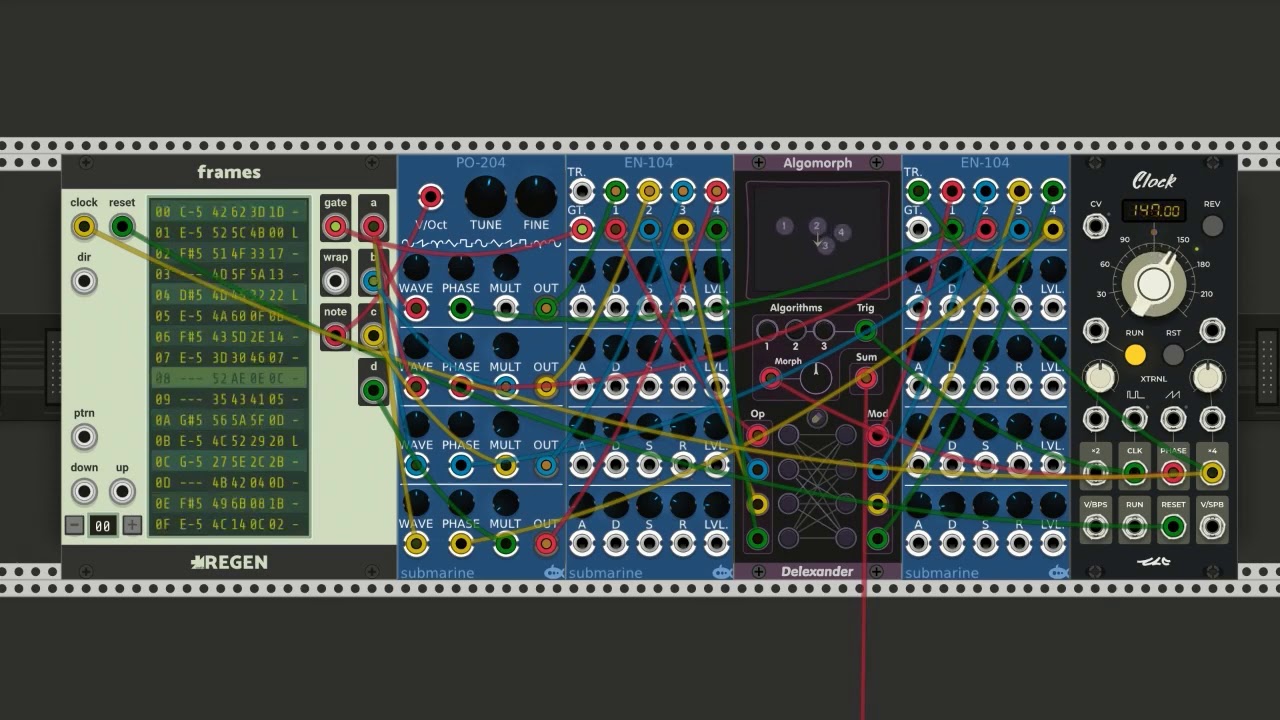 @delexander : any reason this has not been added to the Library yet?

I decided that it just had to have a reset trigger input so that the algorithms could be properly sequenced… Then my effort to find space for that input on the panel snowballed into a whole panel redesign… In the end that left me with room for one more input, which became a little project unto itself!

I’ve got all that squared away, and now I’m just working on cleaning up a few rough edges that I’ve singled out for polishing prior to release. If anyone wants to follow what I’ve been working on and what I have left on my to-do list, I’ve been tracking most of it here on GitHub.

I plan to have new builds available for testing later this week, and barring any unforeseen problems it should be on its way to the library not long after.

For now, a sneak peek: 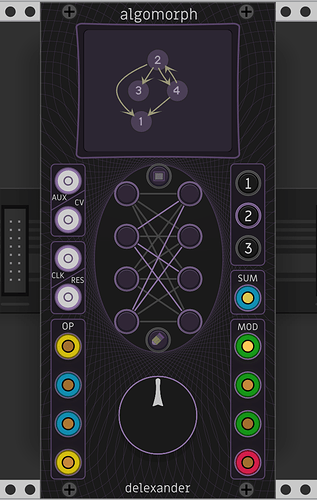