[SOLVED] Is it possible to lock/sync the VCV SCOPE to exactly one clock cycle to have a phase lock function?

The problem is that the knob to set the timing is not good to perfectly match the observation window to the cycle length. 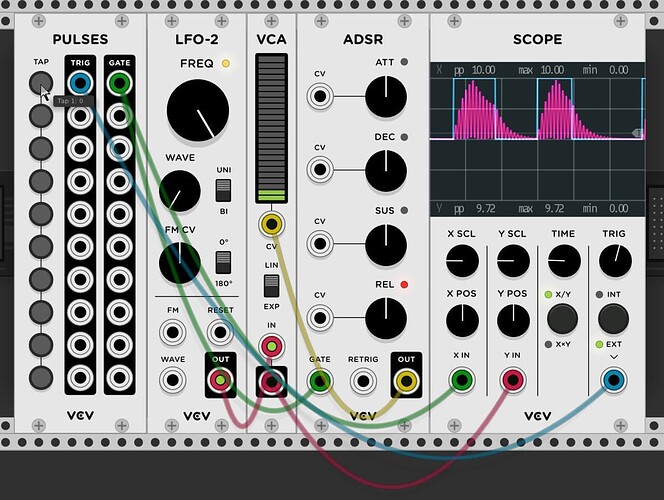 There is also an interference with the calculation speed as it seems. I tried entering different values and the display swallowed certain frequencies leaving only a strange curve. 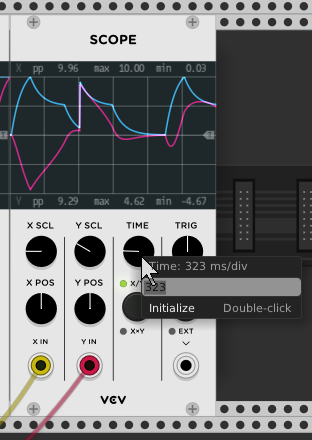 What I want to achieve is that the gate and envelope and wave that is displayed, doesn’t jump around on the scope, but stays ecactly at the same position and only changes when I turn the knobs.

Is it possible to get this fixed/added?

Here is a Mockup UI: 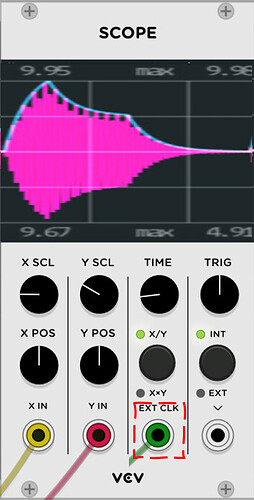 The real external clock trigger input is just to the right of the one you have mocked up.

Can you please explain how it works? I can’t seem to get it working the way I want, because even when I switch it to EXT, the waveform is not locked to the observation window. Also I didn’t find any tutorial that covers the EXT jack.

Send your trigger into that bottom right input (often a beat / 1ppqn pulse). Then adjust the time knob till it stops moving and shows the length you want.

You can try downloading my ShapeMaster Psytrance Kick patch that I posted here recently - I do exactly this with the scope.

Exactly that is what I want to avoid.

I don’t want to have to manually adjust “until it stops moving”. Oscilloscopes usually have a phase lock button to do that automatically, but synchronizing with external clock should also be able to achieve that.

Sounds like the phase lock button might be useful…but it’s easy enough to get it to stop moving and start on the left.

On my KORG Minilogue XD for instance the oscilloscope is always phase locked by default.

Did you try my kick patch? Even the screengrab from it should show what you want…

Actually no because I cannot see any cables, only the colored jacks.

Well the patch is there to download… took about 1 second to get the scope fixed like that.

I downloaded it and this is the result: 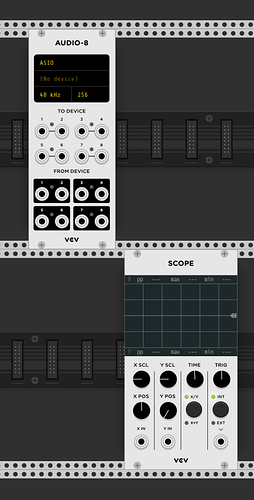 You will have to select your own audio device in the audio module of course - same as with any other patch you download from someone else.

And you need the impromptu, MindMeld, Bogaudio, Nysthi and Vult plug-ins - all free in the library.

What does the phase sync from SINE BGA do? That could be a possible workaround.

Still not happy with it. I really think the scope should have the phase lock or clock sync function.

There is no need to blow up the setup with lots of modules for just a simple thing like that.

The phase sync on The Sine VCO has nothing to do with the Scope - it just resets the phase of the VCO so each kick sounds the same.

Nor do any of the other modules in that patch have anything to do with it - only the VCA out from ShapeMaster and the clock out from clocked into the scope are relevant.

The purpose of this patch is just to show you that it is both quick and possible to do what you wanted.

This is what I built and it should be possible to TAP PULSES 1 and the SCOPE should start on the left side as soon as you press and the zoom should be adjusted by the TIME knob of the SCOPE. But apparently the EXT input on the SCOPE is doing NOTHING! 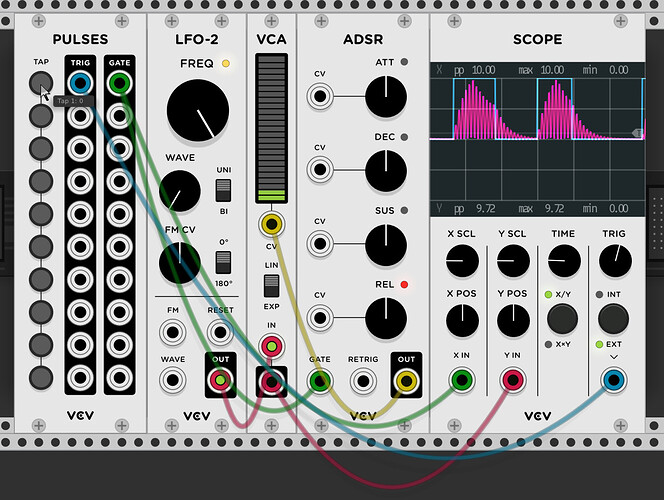 You could try the Submarine EO-102 oscilloscope. It doesn’t have a phase lock either, but it does have a pre-sample buffer, so you can see a short while before the trigger pulse. First - my apologies - it was early in the morning here and I was not in front of my computer. I just opened my Kick patch and realised that I did not even have the clock connected to the scope in that… Doh!

Now for the good news - when you DO connect the clock to the scope in my kick patch, it does phase lock the scope and the time knob then just controls the width of the window.

Here’s a grab with cables showing - just add the cable from the clock to the scope to the patch you have, click the button above the scope input to set it to external, then turn the time knob (not to stop it moving, but to change width of observation window).

I think the problem with your pulses patch above is that perhaps it does need to be a clock (sequence of pulses) that is sent to the Ext scope input, not a single pulse. 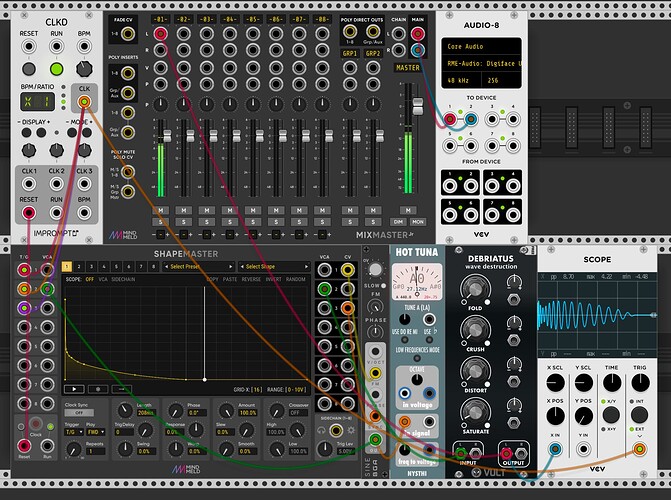 Here’s another couple of grabs with different time settings so you can see it always starts on left and time just changes window width: 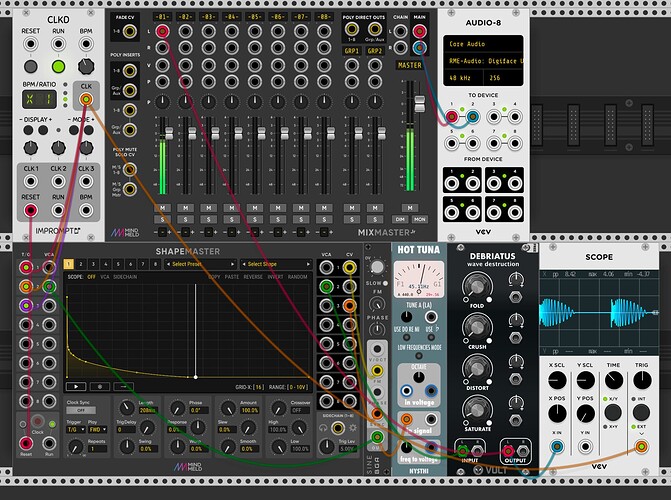 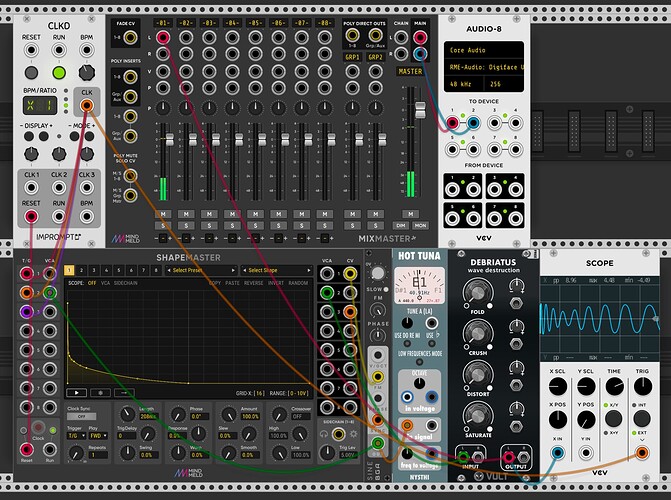 Hi Steve. Many thanks for your effort and your patience with me.

Since I am a beginner with VCV it is essential for me to deeply understand the basic functionality with only a few elements. Your patch might be the one-solves-all-solution but I need to get the grasp how the EXT CLK on the SCOPE actually works.

Would you be so kind and use my example here or explain why it doesn’t work and how to change it to make it work without introducing more modules: 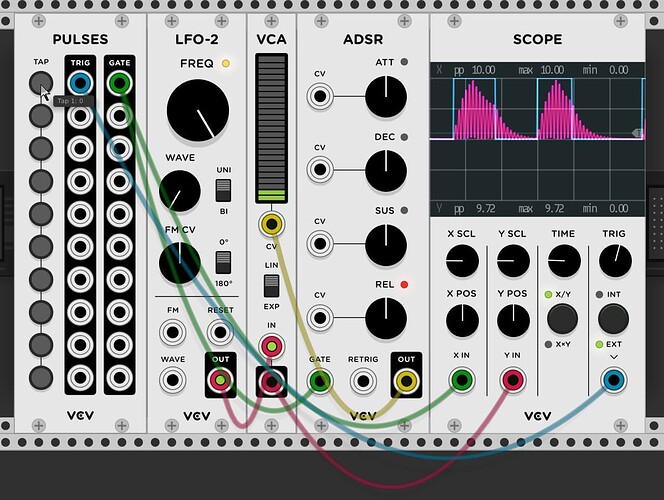 I think the problem with your pulses patch above is that perhaps it does need to be a clock (sequence of pulses) that is sent to the Ext scope input, not a single pulse.

I think this is probably the answer

Thanks, that did it for me, but still it is quite an overhead to get that clock merged into a POLY from the sequencer and SUMmed it into MONO. Is there an easier way? (just using the GATE from the SEQ-3 doesn’t work) 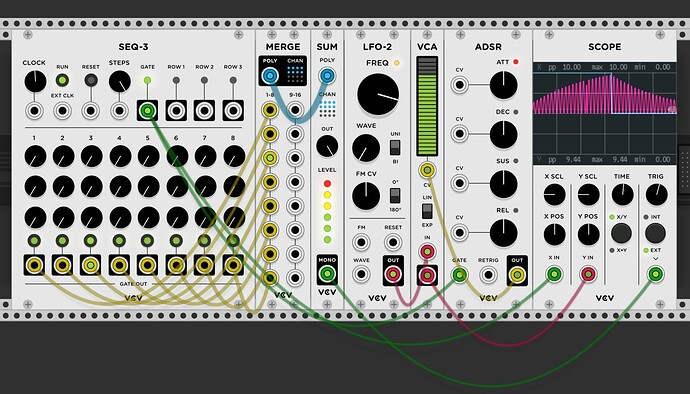