I’ve been working on a plugin collection, Skylights. It contains a few nice things:

Mac build added (do you want to give me push access again and I’ll try to keep the Mac builds updated)?

Felt like coding this up today; it’s in pre-release form in the repo:

The ALAN is based on the technical paper for Tom Whitwell’s Turing Machine and an amazing demo video of a real one, while the faceplate is a combination of component library and @David’s design template. It’s not the first turing machine, or the only one, but it’s pretty and it’s fun to play with. 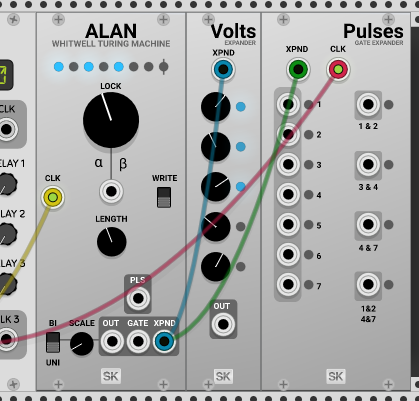 Finished the pulses module and added it to pre-release. It works both as a gate (when there is no clock) and as Whitwell’s module does when a clock is provided.

Contemplating either a Noisering style module that is compatible with the XPND port (and thus the pulses and volts) or some kind of multi sample-and-hold in the spirit of that thread talking about modules to randomize other modules.

cool Skrylar, let me know if you are needing some graphics!!

Slowly integrating the ones you made as I figure out how to get them in the code. Light versions of the plugs are in the pre-release of skylights, probably headed towards JACK after the Windows stuff is sorted out there. 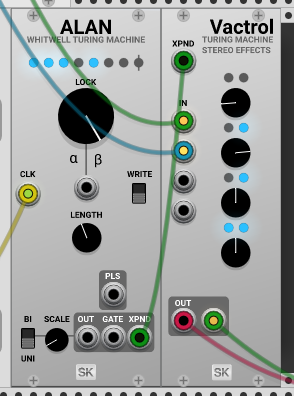 Pre-release now includes the Vactrol Mix Expander. This is the last of the three turing machine expansion boards and the one which allows you to create randomized stereo landscapes.

Skylights sounds great. If everything basically works (i.e. doesn’t crash), even though it’s not feature complete yet, I would highly encourage you to submit this to the Plugin Manager. That would be great, thanks!

Thankyou for these excellent modules!

Is there a Mac version to test?

You can build for Mac from the github source at this link, https://github.com/Skrylar/skylights-vcv

Instructions for how to setup dev environment & build plugins can be found here, https://vcvrack.com/manual/Building.html

You can build for Mac

One pain point is that Xcode is a very large download and install for someone to have that isn’t doing any developing. You might be able to get @Nik to do it, or install through the plugin manager when we show up there

@jue There you go. I haven’t added it on GitHub as it should be in the plugin manager soon.

Thank you!
After being a musician, an artist, a composer und a producer over the years the next step to a developer is very hard for me!

And thank you for these modules!

Hello,
for me the Vactrol Mix Expander shows some strange behavior on mac. Most of the time it works prefect but some times it starts producing noises like I would feed it with some low drum or gate signals, While this is the case even disconnect the inputs does not stop the noises. Have no idea what is going on. You have to close rack and start again. Some times this behavior comes when I save the rack file or doing something in a different window of the finder.

Probably worth a github issue, but…

The problem is only coming when Vactrol is in the patch aside the ALAN module.
It does not happen consistently, sometimes the patch is working without problems.
Have several patches were the same problem occurs.
Combinations ALAN with Volts and/or Pulses only are working like a charm.

That does narrow down the search space quite a lot then