What it should do is rein in excessive highs and re-arrange energy in the lowend for a rounder, yet defined sound. Try driving it hot to really hear what it’s doing.

Okay, I’ll try that in a minute. Is it worth running Interstage as the last thing in my signal chain before Audio 8?

does this mean tracks 1-8 would get double the “mojo” as they are going through console twice?

Kind of, but the effect would be minimal, as the 2nd console treats the input from the 1st as just one additional stereo channel. So the sum from the 1st gets encoded/decoded again, but not all 8/16 channels.

I tend to do it like this, but according to Chris it could go anywhere in the chain. Maybe put it early when additional processing needs a more polished signal. Or run it at the end to take off some edges introduced before. There are no rules really

Oay. I have a strong suspicion that my twenty year old computer speakers aren’t giving me a totally accurate rendering of the sound that VCV makes anyway so i did an experiment with a Subtract module (subtracting the before Interstage from the after) and that shows there is some difference.

I have a strong suspicion that my twenty year old computer speakers aren’t giving me a totally accurate rendering of the sound that VCV makes anyway so i did an experiment with a Subtract module (subtracting the before Interstage from the after) and that shows there is some difference.

Having a good monitoring setup - even some decent headphones - will change what you can hear, and help you get better sounding mixes.

Having a good monitoring setup - even some decent headphones - will change what you can hear, and help you get better sounding mixes.

I know but I’m very poor.

Hey guys, please check out this development release. I changed my mind and made a new module just for this purpose. I think it’s cleaner that way. Don’t be fooled by the version number, I forgot to bump it. The assets are labeled v1.1.1 but it should be the newest build. Let me know if this is what you had in mind and if it works as intended.

I just downloaded the 1.1.1 Mac build from your link and the new module does not appear to be there?

Thanks steve, maybe something went wrong with the cross compilation script. Never tried to build a release from the development branch. I’ll prepare another release using master and see how that goes.

Edit: Updated the link above. Please try again, hope it works this time around.

Looks dope and user friendly! And finally the fine way to do proper ab testing! Thanks! BTW does the summing affect thru outputs? I think this was not the intention but anyway

Thanks n0jo - all good now and appears to be working very well!

Appreciate you making this custom version for our mixer

Were looking to see if we can add a new master track setting on MM along the lines of “Solo Chain Input”, which would allow Console MM output to go back into the Chain Input on MM and bring the Master track fader and VU back into play. Can’t promise yet but hopefully it will work without breaking anything. Will be a very neat external dsp summing round trip if it works! 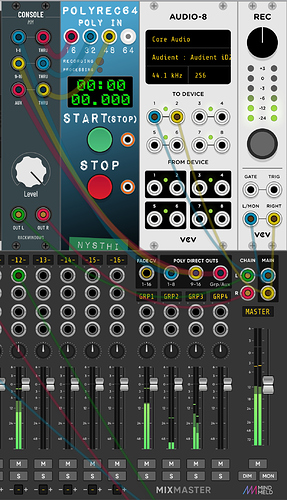 @n0jo - one tiny suggestion - perhaps consider relabelling the “AUX” input on Console MM to “GRP/AUX”? - just to make clear that it carries both the Group tracks and Aux tracks

Thanks again - this is awesome!

Now that would be terrific and complete this little symbiosis nicely! But even as is, Console will be so much more usable in conjunction with MixMaster.

one tiny suggestion - perhaps consider relabelling the “AUX” input on Console MM to “GRP/AUX”? - just to make clear that it carries both the Group tracks and Aux tracks

Of course, will do.

BTW does the summing affect thru outputs?

No, it’s the signal straight from the respective input. Would you have use for that? Maybe as a menu option to toggle between unaffected and summed?

The fact they are labelled “THRU” definitely suggests they are, as you say, unprocessed copies of the input signal.

I can see how getting access to dsp processed, but unsummed, multi-track outs from Console MM might be useful though.

I guess an ideal solution would be to have a heading of IN on the left column (with jacks labelled 1-8, 9-16, Grp/Aux) and OUT on the right column with same labels underneath the jacks (or possibly one instance of each label between the jacks). Then have a menu option for setting whether the OUT poly jacks pass unprocessed or processed signals. That would be great.

Sweet! Will try this tomorrow. This developer community is awesome.This is the 3rd module I’ve asked for that someone actually implemented.

Agreed. The labelling makes sense and having the option to switch the OUT mode won’t hurt.

Hope to do a comparison between clean and console outs soon

No dumb questions, only dumb answers

In short, the individual channels get distorted, summed and “undistorted”, which leads to the desired effect. It’s subtle af but adds up and becomes more pronounced with more channels in play.

Here is my summary from the readme:

Airwindows Console systems sum signals in a way where the resulting soundstage appears less flat, more spacious and more in line with what we are used to from analog mixers. There are a number of variations/flavours of the console concept and this module currently implements the most recent one, Console6, and PurestConsole, which can be selected in the context menu.

NOTE : Due to how the encoding/decoding works, spaciousness and definition will increase with each additional channel. There will be no effect on a single channel at all.

For more info on how this works please check the relevant articles on the Airwindows website itself. There are numerous posts (and videos), because there are a number of different versions of Console. If you feel particularly brave you could also look up threads on Gearslutz or KVR.

MixMaster is a clean digital mixer. It does not try to change or add anything to your sound which is not already there. Console on the other hand does change the sound - it adds some subtle analog-like ‘mojo’ which depending on your tastes and the type of project you are working on may or may not be something you want.

To answer the second part of your question - As things stand now, because the direct outs on MM are pre Master fader, when you use them to send the tracks to console for summing, you take MM’s Master fader, VU and Main output out of the equation - your master level control becomes the level knob on Console and your main output becomes the stereo out of Console.

Once we implement the “Solo Chain input” on MM, you will be able to feed the Console output back into MM’s Chain input. The advantages of this is that it brings MM’s master track back into play - meaning you are back to controlling all your levels in one place and get back the Master fader and VU with its accurate Peak and RMS metering, the soft clipper, the DC blocker, the fade automation, the dim and the mono.