I’ve logged feature requests for both MindMeldModular and RackWindows, but wondered if I’m missing a trick.

To use RackWindows Console with MindMeld, I have to use 2 (or 3) VCV Split modules, to take the Poly Direct outputs & Grp/Aux outputs into 2 instances of RackWindows, daisy chained, in order to sum all the direct signals from Mixmaster. Picture below illustrates.

Is there a better way to do this? Is it out of line for me to ask @marc_boule to enhance Mixmaster, and/or ask @n0jo to make a special Console module that can handle the direct outs from Mixmaster?

What is reality anyway? 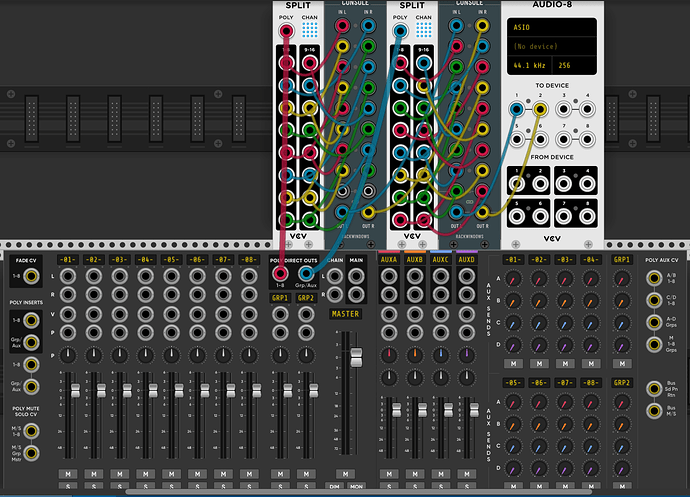 Hi Kent, never out of line to ask

But in this case I’m not sure we want to start adding such DSP effects in MixMaster. It’s already loaded with so many options, it would be an endless quest really, and at some point we have to consider the design being complete as it is.

Would it be easier if rackwindows were polyphonic?

I’m not sure we want to start adding such DSP effects in MixMaster. It’s already loaded with so many options,

I don’t disagree. The Mixmaster as-is is one of my favorite creative tools. The timed fades is absolute genius and makes live performance with a patch a much smoother thing.

I’m just a very selfish Rack user who wants my every passing fancy to show up in the Plugin Manager!

My first thought was that @n0jo could quickly hack out a version of console that can sum 3 poly outputs (i.e. as 24 stereo pairs), and that might be the best way NOT to complicate MixMaster any further.

The other thought was a RackWindows Console implemented as a MixMaster expander.

But not actually being a Rack programmer, I have no idea how much effort that would involve. It SEEMS like it’s just a matter of connecting up already-existing bits of code.

But my day job is writing code, and there’s nothing I dread more than a user saying “Wouldn’t be nice if the software did X” with no concern for how difficult it will be to design, code and test X.

I’ve been experimenting with rackwindows and they already are poly. Including console. Having said that in a lot of cases I have no idea what they actually do (interstage for instance).

I’ve just been using it as a send effect with the sends at 100%. Not sure if that’s the best way to use it but it really warms up the sound.

My first thought was that @n0jo could quickly hack out a version of console that can sum 3 poly outputs (i.e. as 24 stereo pairs), and that might be the best way NOT to complicate MixMaster any further.

As the summing process you want is Rack Windows dsp, this sounds like something that would need to be looked at on the RW side rather than the MM side I reckon.

I’ve just been using it as a send effect with the sends at 100%. Not sure if that’s the best way to use it but it really warms up the sound.

I don’t think that does what you expect it to. The whole purpose of console is to be the summing bus – i.e. the thing that adds all channels together into a single output. If you read the documentation on airwindows console, it’s clear that putting it on a send/return pair doesn’t really do what it’s built to do.

Also putting it on send/return means that it will possilbly just introduce a phase shift into your mix. If you like how that sounds, great, but it is misusing Console.

The whole purpose of console is to be the summing bus – i.e. the thing that adds all channels together into a single output.

Is this one of those “subtle sound voodoo” things where some people swear by it and other people can’t even hear it?

Yeap. In some daws it’s pretty difficult to even a/b these because not all support bypassing multiple plugins on different tracks but I suppose with VCV it should be easy to set up a poly switch to a/b them. From the little I’ve played with them in vst format they do make a noticible difference but it is subtle and it’s not necessarily for the better depending on the material/style etc.

If you like how that sounds, great, but it is misusing …

isn’t that the real fun part of VCV?

but I suppose with VCV it should be easy to set up a poly switch to a/b them.

I’m using Vult Bypass with the Tape and Interstage plugins on one patch and, while I can hear a difference with Tape, Interstage doesn’t do anything I can here even though there is a slight difference on the scope.

with VCV it should be easy to set up a poly switch to a/b them.

Sure, but I did it with a crossfade module. Interesting effect that if I put the crossfader at 50% to get both Mixmaster and the Console input at the same time, it collapses the stereo field almost to mono.

This is because (no doubt) a delay induced by the Console module, but it’s weird how it sounds when you mix the two.

Yeah, every now and then someone brings up the dreaded “delay compensation” request. But I know that feature is difficult in DAWs, and it would seem super difficult to do in VCV. I don’t see that happening. But at least it’s good to be aware of these audible artifacts we can experience due to delays in internal processing.

Would it be easier if rackwindows were polyphonic?

It is polyphonic I think, in that it does SOMETHING with polyphonic inputs. But it won’t do the right thing with respect to the direct outputs from MindMeld Mixmaster. Mixmaster outputs 8 stereo channels interleaved, i.e. for Direct Out 1-8, it outputs 1L, 1R, 2L, 2R, 3L R3 etc. Same for Group/Aux Direct Out.

What is needed is a version of RackWindows Console that takes two or more of these ‘interleaved stereo’ polyphonic inputs and sums them using the plugin’s algorithm, i.e. every L channel summed to the L & R channels summed to R.

I mean I can keep doing it with splits, but you’re limited to 8 stereo channels per RackWindows Console, and for RackMaster you need to handle 24 stereo channels.

What’s the best way of wiring this up then? I started to try this earlier but got a bit bored when I realised how many modules it would take for 16 track mixer, especially with an a/b.

Definitely need the poly summing that @chaircrusher mentions, unless there’s a much easier way that I’m missing.

Yes, this is something that could and should be done on the Rackwindows side.

Right now polyphonic channels are summed individually and you’ll end up with up to 16 separate sums (not sure if that’s useful to anyone but still). How about adding an option to Console to switch the behaviour to what you described? Let me mock something up in the foreseeable future for us to try.

Interstage is subtle indeed, but also largely dependent on the input level and characteristics of the source. Sometimes it doesn’t even do anything, when there is nothing for it to do. What it should do is rein in excessive highs and re-arrange energy in the lowend for a rounder, yet defined sound. Try driving it hot to really hear what it’s doing.

If it helps at all, there is already some code in MM that sums a poly signal such that odd channels go left and even channels go right that you are welcome to use.

One question I have about the pic in the OP - the output of the first console (Tracks 1-8) is going into the 2nd console. I’m not too familiar with the dsp applied in the module, but does this mean tracks 1-8 would get double the “mojo” as they are going through console twice?