Rack2 - All sorts of problems on Ubuntu Studio

I was delighted with V2 running on Ubuntu Studio initially - currently at VCV Rack 2.0.5. There were a few crashes on the earlier versions but I was guessing they would stabilise. I love the new features, and everything seemed to be running faster.

But in this version I’m getting all manner of odd effects - I’ll mention the oddest which is I had a simple two voice patch - (voice 1) a classic two-osc synth and (voice 2) a drum sequencer + modules. When I connected the Midi-CV Gate to the env generator on voice 1, the volume of the drum machine suddenly increases.

Sadly I don’t have time at the minute to diagnose this, send stripped-down patches etc. I will have to revert to Version 1 for the time being and return a little later when things have progressed.

This is not a complaint, I totally applaud the effect to progress VCV - it’s fab, really. With my musician’s hat on, rather than coder, I need it to be pretty reliable.

what Version of Ubuntu Studio do you use? I have 2 partitions, one with 21.04 and one with 21.10 and on both there are no problems with V2. Maybe it’s a matter of your settings?

One thing I haven’t reported yet, dialogs appear beneath the main window so I have to minimize rack to see them. Anyone else?

I’m using 21.10 with KDE Plasma and most of it runs without problems.

@contemporaryinsanity … same ‘problem’ here, but I can quickly click on the taskbar to the mostly unnamed entry on the right side of VCV Rack. I know, it isn’t nice, but it works … for me.

Yeah I get this as well but as it’s not a VCV native dialog I’m not sure they can do much about it. Perhaps you can set a custom window manager rule for it to stay on top. This is pretty easy in KDE but not sure about xfce (?).

This is pretty easy in KDE

I’m all ears / eyes if you care to elaborate?

In KDE, make the dialog come up, right click on the titlebar, choose More Actions > Configure Special Window Settings > Add Property > Keep Above Other Windows. Choose Force and Yes. Done. Depending on the rules you might need to do this for the various dialog types. (I forgot to choose Force when making this screenshot) 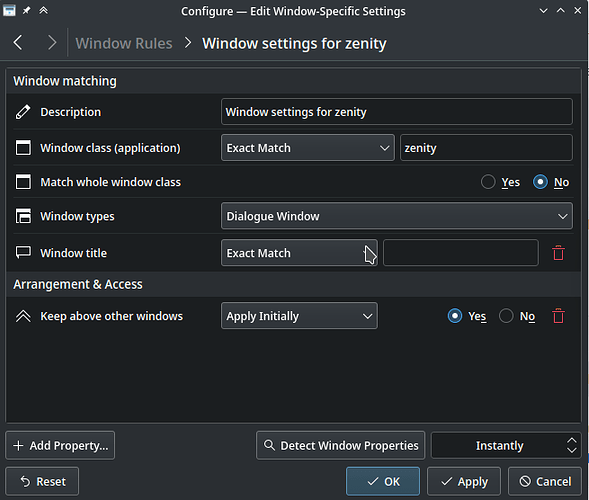 Running a pretty standard Ubuntu Studio 21.04 install here, with Jack for audio. Rack 2.0.4 works well overall; haven’t upgraded to 2.0.5 because of the sample rate issue some users pointed out (details here). Performance is improved compared to Rack 1.6. Haven’t experienced anything like that volume bug described by @Soxsa – sorry. Main problem I’ve encountered is MIDI input causing crashes – someone on Discord told me it’s a known bug, I emailed support with details in case it might help. I agree that using version 1 is safest if you want to be sure you can rely on the software. Fixes have been coming pretty quickly, so I’m hoping Rack 2 will be stable soon. I’ve run some good patches in it so far.

@contemporaryinsanity Are you running Rack 2? I had that problem with the dialogs in Rack 1.6, but Rack 2 solved it (once I installed the Zenity package, which really should be listed in the system requirements). In the KDE system settings for Window Behavior, I have “focus stealing prevention” set to medium.

But in this version I’m getting all manner of odd effects - I’ll mention the oddest which is I had a simple two voice patch - (voice 1) a classic two-osc synth and (voice 2) a drum sequencer + modules. When I connected the Midi-CV Gate to the env generator on voice 1, the volume of the drum machine suddenly increases

I already reported this bug

Are you running Rack 2?

I haven’t reported yet, dialogs appear beneath the main window

I think is not a Rack issue, is a OS wrong set up, provably you must disable the option to rise the windows under your mouse.

In KDE you can set window rules so that any window that fits a certain criteria stays above others. Not sure what ubuntu studio uses but there might be something similar. You can also use alt+tab if you have that set to switch applications.

thank you, i’ll try this. although it doesn’t always happen since vcv2. i believe that ubuntu studio changed from xfce to KDE plasma about 2 releases ago. no complaints here, everything just works. well, everything except the beloved ‘audio-recorder’ - the easiest way to record the browser sounds. great to capture sounds from youtube for example.

I already reported this bug

Yes I get the occasional midi crash too - seems to be mostly when using midimap, so I’d stopped using than and switched to using CC-CV, which seemed a bit more stable.

what Version of Ubuntu Studio do you use? I have 2 partitions, one with 21.04 and one with 21.10 and on both there are no problems with V2. Maybe it’s a matter of your settings?

21.10 - it’s always possible it’s some hardware interaction or maybe just the particular choice of modules. But my setup has always been rock solid on V1 and other audio software I run. I just think it’s Rack2 not being quite stable - I’m sure it’ll get there.

I’m happy to report that the new version (2.0.6) solves the MIDI input for me (I get the occasional stuck note but I’m not sure if it’s a problem with Rack specifically, and at least the crashes are gone). And it looks like the sample rate issue has been fixed.