Thank you for clicking in!
Here is the patch: 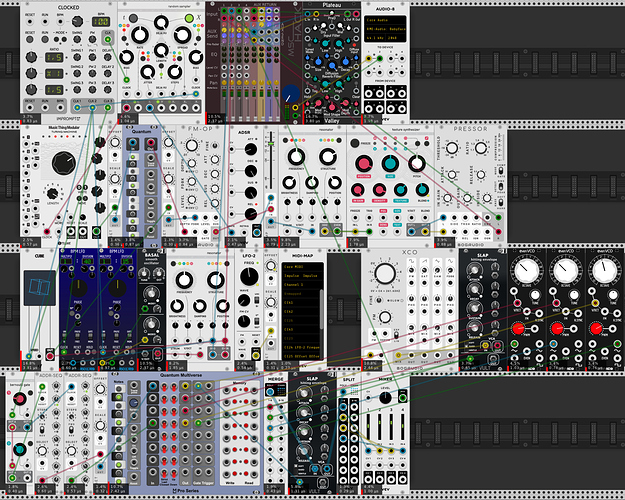 I created this patch for about a month ago and it was fine, but when I opened it again three days ago it starts to sound very glitchy, sometimes can’t even produce a continuous sound. When enabling CPU meter all sound will stop.

I am using a 4-core i7 2012 MBP with 16gb ram, and changed a new SSD about 2 years ago, running with High Sierra 10.13.3.
The weird thing is that when I open the same patch on another computer (2011 iMac 4-core 16gb ram i5) it runs a lot better, very smooth mostly.
The glitchy issue happens to other patches as well, but only on my MBP.

Things I have tried:
set frame rate to 15 from 70
choose real-time priority and 1 thread only
minimize the window
simplify my patch
clearing files on MBP (now more than 250GB available)
tried all block size
updated everything
have a cigarette

What else can I do? Is there anything I overlooked?
I hope it’s not the time to change a new computer…

Very much appreciated and thanks for all your help in advance!

Does your MBP have a dedicated GPU?

Can you upload the actual file to patch storage or here? I have a similar computer. 2012 i7 mac mini with 16gb of ram and an ssd.

According to the CPU meters in your screenshot, it looks like you’re using up a lot of processing power with this patch. It looks like you’ve tried all the standard tricks to improve performance, the only other one I know of for a MacBook is to run Rack in “Low Resolution” mode. This helped to reduce the fan noise on my MacBook, but I doubt it will actually improve the glitches.

My suggestion is to remove or replace modules in the patch with alternatives that use less CPU. For instance, EV3 from Squinky Labs is a single module with 3 Even VCOs inside.

[Edited to remove inaccurate information about the CPU meter. See below]

I think you are correct, the CPU usage of Audio-8 no longer represents all left over CPU. But as far as over 100% I think it’s just like the OS X activity monitor - the total available is 100% times the number of threads. I’ve seen my 4 core macbook get to 350% in activity monitor.

This patch is showing very high CPU usage, not sure why. Clearly cube and the Bogaudio VCO are using quite a bit. It’s odd, because Bogaudio modules are in general very efficient - the one must be doing a lot. But, yeah, I would find substitutes for these two super fat modules. And as @computerscare mentioned, one EV3 uses the same CPU as one EvenVCO, but has three of them. Although many of @Vortico’s modules got radically more efficient with the 1.0 release (but looking at my cpu meters it still seems to be the case).

Turn off Wi-Fi? Sounds silly but used to help me on some patches on my old MacBook Pro.

Thanks thats helpful.
I changed a few modules and deleted a few and now it’s working a lot better.
I think the XCO from Bogaudio and the Vults are the main reason.

However, I wonder why this patch runs fine on my iMac which has worse performance? The only thing better on that iMac is the processor speed, does that matter a lot?

Also, I’ve seen many people building much bigger patches with laptops, are they all using monster computers, or there is serious problem with my patch?

I can’t give a reason, but it just seems that Rack’s performance on MacBooks in general is not as good as people would like. Here are a few other threads with more information:

Hi There! I wanted to use VCV Rack for quite a long time but whenever I loaded it up on my 2015 MacBook Pro it would immediately start to heat up and the fans would get extremely loud. Not only that, I would hear horrible glitches whenever I would move my mouse or adjust a parameter and the whole experience was quite choppy. However if I minimised the Rack window it would run smoothly in the background and the fans would slow down. I’ve decided to give it one last try and spent a few hours on f…

So I wanted to mention this before to see if anyone else has the same issue. Well what happens is the moment I run VCV Rack my computer fan kicks on and the computer gets noticeably louder the entire time Rack is running. The second I close Rack the computer quiets down. Its a fairly fast computer (Windows 10) and I am not having any real problem with glitches or Rack crashing. I am actually worried that Rack is overworking my computer. Anyone have this issue? Any work around/solutions? Tips or …

However, I wonder why this patch runs fine on my iMac which has worse performance? The only thing better on that iMac is the processor speed, does that matter a lot?

Also, I’ve seen many people building much bigger patches with laptops, are they all using monster computers, or there is serious problem with my patch?

As has been mentioned in many threads and conversations about Rack performance, there are three characteristics of a computer that determines whether Rack runs well, and the size of the patches you can build. Rack requires these three things from a computer:

In other words, the closest thing to a good pre-built Rack computer you’ll find, is a so called “gaming computer”.

Workstation class laptops work well too if you don’t want a laptop that looks (and lights up) like a spaceship (a ‘feature’ of many gaming computers). You will find it cheaper (non-ECC RAM) to avoid a Xeon in it, even if its single core performance is comparable to a consumer performance CPU.

I am new to VCV and it’s great fun (so big thanks to all VCVer’s) - needless to say but I am not making complex patches yet but having fun watching and learning from @Omri_Cohen videos - super inspiring.

I have a 2017 MBP low end specs and I could cook an egg on that thing when I run VCV but I also have a cleaned up old 2012 MBP (I swapped out the original HD for SSD) and it runs perfectly on that machine - no glitches and no egg frying.

I’ve had problems with the fan on the newer MBP when running games or more graphics intensive applications too… I am pretty sure it’s about screen resolution and inappropriate GPU managing that x2 screen space.

I’m afraid you have answered your own question in your last paragraph. Your onboard Intel GPU is not up to the task of running Rack. The only things that will help is running Rack in low res mode and dropping the frame rate to around 20 fps. But that won’t help very much I’m afraid.

Integrated (non-dedicated) graphics such as Intel HD/Iris are not recommended and cause significantly increased CPU usage.

For some reason turning the app to low resolution (right click the app, info menu) and dropping the frame rate makes a humongous difference on my 2016 MBP. It allows me to run 2-5 times larger patches without glitches. But also makes the computer way less prone to overheating. So there might be room for a bit more optimism.

Thanks for the replies - @Nik @Vortico - Sorry I didn’t read the accompanying documentation.
I’ll definitely try out the low res settings - The audio is what counts. I find it strange that an audio application needs computers running better or more appropriate GPU’s - at least there is some kind of logic to this in my mind. Also please forgive me for my technical specification ignorance.

It’s getting more and more common for all sorts of software to use GPU for rendering. Even web browsers, I think.