Finally bought and fitted some extra arms to my Jaspers stand and it’s freed up loads of desk space plus having all that stuff to hand is very nice for jamming. 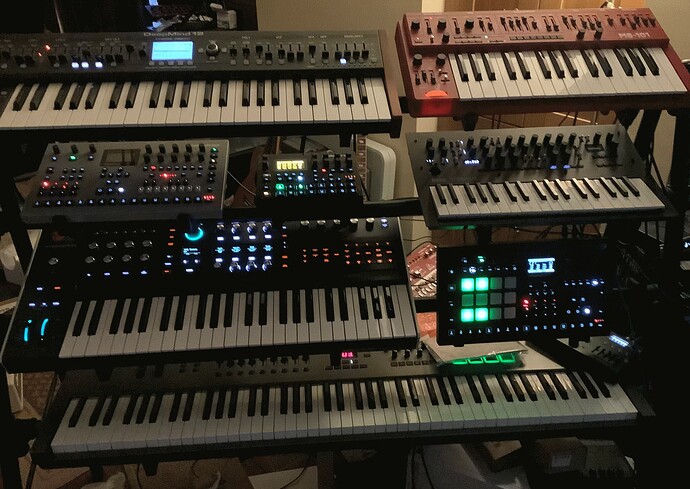 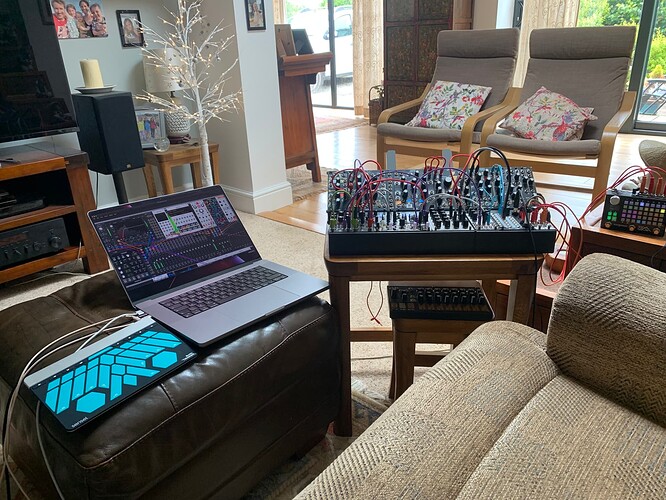 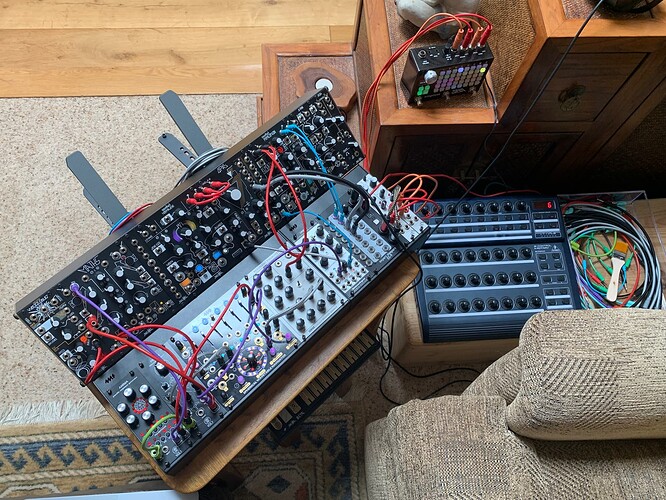 I had no idea that Vult Anima module existed in hardware. I would love a sofa setup, but fear I’d never leave!

Spending more time on the sofa than in the studio

TBH, I don’t like it very much. I’ve had it for over a year and it is a candidate for being moved on; it is in the pod at the moment because I want to spend more time focusing on it to be sure I’m not missing anything. The fact of the matter is that I have never cared much for the sound of wavetable oscillators, they generally sound weak and thin to me. I didn’t like Serum and sold that too. The SWN has 512 sample wavetables which gives it a buzzy sound at low frequencies and a metallic sound at higher frequencies. It is not powerful enough to morph smoothly between tables but it tries to, rather than making its failure to do so a feature. It can be used very much standalone if you want it to which is a good thing, but at the end of the day I’m just not that excited by the sound it produces. I will persist for a bit longer with it though. The hexature chaos outputs of the Orbit 3 are a nice match for its six oscillators and I had some decent drones going over the weekend with it. The Resonant EQ warms it up nicely too.

a second O&C with hemispheres, a Befaco Muxlicer for gate stepping, a Westlicht Performer - beast of an 8 track sequencer in a tiny form factor, a Tesseract Trig31 for converting CV triggers to MIDI notes to pass out of the rig to my DAW and mainly on to my Rytm, a Tenderfoot Quad Quantizer for keeping a grip on pesky scales, a Tesseract VS Logics nice cheap dual logic module, a Tesseract Selam offers six function generators in 18hp for all kinds of uses and I ran out of room in my other rack so my Doepfer passive multiple is there to spoil the colour scheme because the goal of perfection is a pointless folly or something.

Wow - very nice! I need to get my head around Muxslicer. Anything with the word ‘mux’ in it confuses me for some reason. I therefore have no real understanding of what muxslicer does… other than I presume it slices muxes… whatever that means… Not exactly sure what you mean by gate stepping either - is it just gate sequencing?

Cool. Did you build the Per|former?

therefore have no real understanding of what muxslicer does

WITH THIS THINGY INSTALLED IN YOUR RACK YOU CAN:

…I already have sequencers for notes so I’m more interested it as a source of voltages for use in a number of ways like sequencing different patterns in a sequencer, trance gates etc.

Cool. Did you build the Per|former?

I’m a bit cack handed at soldering so I chickened out and found one pre-assembled on eBay. Still only £349 all in so I feel it’s a decent price for a very capable unit. I particularly like that it offers the option to use non note tracks for ‘curves’ like a complex LFO.

I am trying to build up the skills & bravery to take it on. It looks like a great sequencer and people rave about it regularly. Enjoy.

I think the Muxslicer is a pretty permanent fixture of Omri’s rack and he talks about his use of it in his patch breakdowns regularly, often as a clock source, sequencer or switch.

Super interesting system Nik! How do you enjoy the Serge eq? I usually just patch the output into the input and turn it into a self oscillating drone machine

Thanks. As I said to Lars I’m using the pods to swap in modules from my main rack I want to focus on/learn etc. (The Tape & Microsound is unchanging though).

I love the Res EQ. Even after a few weeks I’m still enjoying spending hours just tweaking it. I have done some self-patched feedback stuff - indeed, until I did that I couldn’t really figure out what the switch was buying me, and then it became clear.

I’ve been using it a lot though just to pass digital stuff through because it instantly drenches in it analog warmth and goodness.

I saw a photo of your lovely Serge case! I’m jealous