@synthi @Squinky
Hi, it seems that phasor and mixer 8 (Squinky Labs) don’t output polyphonic cables when receiving them.
Am I missing something? 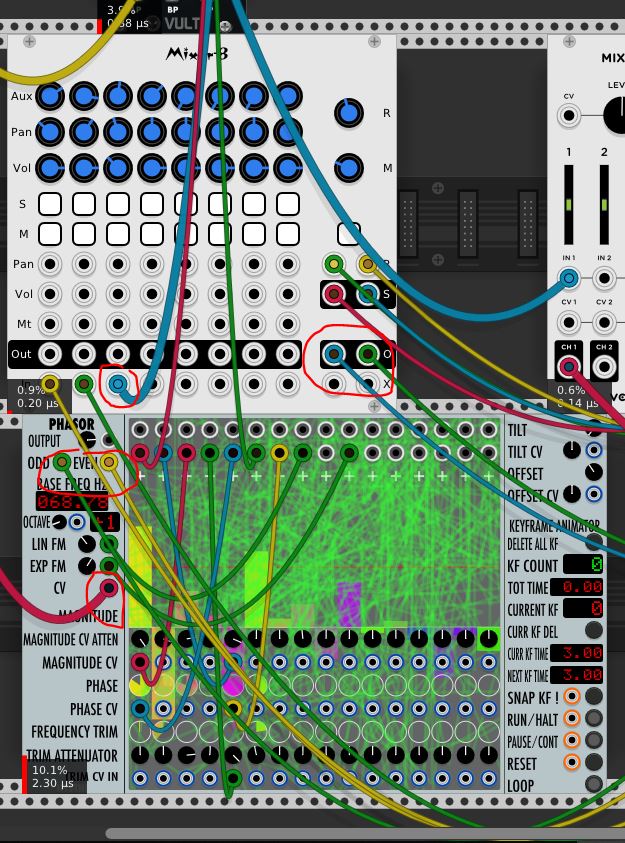 PHASOR is not POLY (I have my doubts for the future too, too expensive)

Ok! It was just to know if it was supposed to be. Shouldn’t be IMHO. Thank and cheers. I must say that I find your work incredible.

Too expensive in terms of CPUs and as nobody uses it, I’m not so excited to improve it using multithreading

anyway, my first idea about it was more than to play is a tool to TEACH (fourier series)

but is and incredible DRONE generator

I am using it in my current patch, only just discovered it. Not sure I understand what it is meant to be/do yet but it’s great fun exploring.

it’s an Harmonic VCO with 16 partials. Partials are all pure SINE Oscillators
and for the animation there are 16 more oscillators going 1000x times slower (to present an acceptable video of the physics)

evey partial is modulable and settable in Amplitude, Phase and Frequency deviation

as it is difficult to modify 32 VCO at the same time, I’ve added a keyframe animator

the KF animator can generate DRASTIC changes in timbre

Ah so that’s what KF stands for! It’s a beast of a module and I’m only just scratching the surface of it.

Squinky labs mixer is not polyphonic either.

OK! The only mixer that seems to work correctly by receiving a polyphonic voice is the NYSTHI ones…
I put plateau and limiter after the mixer. If the fundamental works when directly plugged into audio interface, it doesn’t work anymore when effects are plugged in between… I’ll try to post a video to show…

Hi Denis!
You have to think of polyphonic cables as a way of transmitting up to 16 signals in a signal cable. If you send a polyphonic signal with , let’s say, 4 voices (4 channels), the mixer will only be able to receive the first signal (first channel). Also, let’s say that you’re using the VCV mixer, which is polyphonic, but then you want to send everything to Plateau, which is monophonic, it will not work properly and Plateau will receive only the signal that’s on the first channel. You have 2 options: You can use the Sums module to sum all of the polyphonic signals into one mono channel and send it to a monophonic mixer or effect etc. Or, you can use the Split module to split the polyphonic signal into up to 16 individual channels, which you can then send to separate channels on your mixer and pan them\process them differently. Keep in mind that the channel numbers are respective to the signals themselves so what’s coming in channel one, will come out of channel one as well.
Let me know if it makes more sense now.

Absolutely… But since that, why the nysthi mixer doesn’t need that trick even if it sends only mono cables out of its output… See the vid.
Anyway, your answer is perfectly clears. Thank you very much.

– They accept POLY only in CHANNEL 1 LEFT (and is the only INPUT that is POLY: no CV no controls, no OUTPUTs are POLY)
– if a POLY cable is in, the POLY signal is spread to all channel (till the max of in-POLY)
– if you try to put a signal in a channel currently occupied by a POLY cable, will be not used (there is no OVERRIDE)

the idea is to give movement to the voices of a POLY synth, placing or animating volumes and pans for more analogue emotions

Understood. Not very handy though. Difficult to understand why almost all the mixers are not poly. But Ok! Now I know what to do! Thanks again.

Well, with the Sums module you can get the same effect as having a poly mixer, but for me, the most fun is to process them and pan them differently so it’s easier to split them.

Too expensive in terms of CPUs and as nobody uses it, I’m not so excited to improve it using multithreading

I use it quite often in streams though i’m not that concerned about the lack of poly.

In fact… You’re absolutely right. I don’t regret to have post this question since I know that’s normal behavior and know a little bit more about the concept!

Same here.
For the record, I wasn’t suggesting it should be poly earlier, just that it is used.