I watched an interesting tutorial from Jakub Ciupinski about filtering Supercharge your VCF.

I replicated the technique and it does indeed make wonderful noises. However, I noticed that the filter’s was up to 19%. What would happen if I added 5 more VCFs with this technique? Does VCV crash?

Finding the manual on what these performance meters mean. 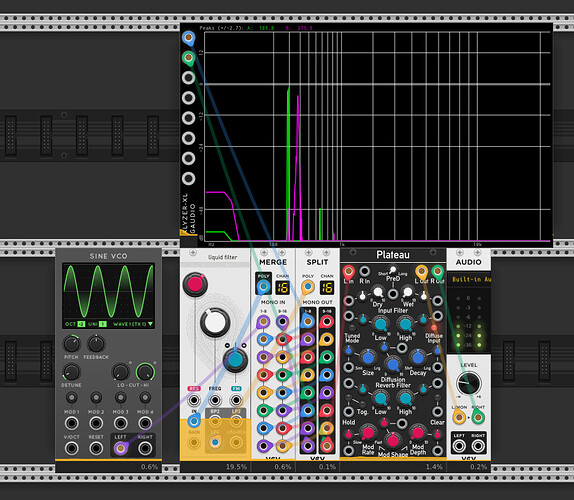 VCV would not crash, but you would start hearing stutters in the audio as soon as the audio could no longer be generated fast enough to keep up with the sound card’s rendering rate.

But anyway the surge filters have voice parallel polyphony and are pretty cpu efficient in some models so you may get better cpu with some of those - especially the more basic ones?

I think venom has a just published from beta recurse module.

I have seen @DaveVenom do this exact thing with my F2 filter, I think mainly because F2 uses a really small amount of CPU.

This became one of my favorite techniques after I saw Jakub’s video over 1 year ago. Jakub does not use this term, but I call it recursive filtering. I’ve used the technique in many patches.

I think venom has a just published from beta recurse module.

Yep - recursive filtering is a prime driving force behind my development of the Recurse module.

Well, after dreaming about modules I would like to see, I finally took the plunge, and created my own plugin - Venom Modules. This is just a beta release - it is definitely not ready for release to the library. But hopefully soon it will be ready - with your help! I am asking for help with beta testing to help root out any bugs, and to give some feedback on the feature set, layout, documentation, etc. Full documentation and downloads for Windows, Mac, and Linux here [Venom Modules] Bernoull…

I have seen @DaveVenom do this exact thing with my F2 filter, I think mainly because F2 uses a really small amount of CPU.

Yes indeed - F2 is a great choice for this technique, as it hones in on 1 or a small cluster of harmonic partials using very little CV, yet also manages to add some character.

I’ve been meaning to publish a patch that compares the suitability of various filters for this technique. I’ve had various forms for over 1 year! It deserves a demo video, but could never get around to creating one. I will try to post the patch without a video today so people can try it out.

Once my plugin is finally released to the library, I will publish another version of the patch that uses my plugin.

Yep - My Venom plugin has a pair of Recurse modules, one mono, and one stereo, that is designed to do this very thing. Venom Modules is in beta now, and I hope to release to the library soon (good luck defining what that word means).

Is it when you make an issue like Issues · VCVRack/library · GitHub and paste your github commit in your issue?

There are steps before that though. Mostly involving making sure the GitHub commit you paste into the issue works

Here is my filter comparison patch:

About one year ago I stumbled upon Jakub Ciupinski’s amazing video VCV Rack Hacks | Supercharge your VCF. I fell in love with the technique, which I like to call recursive filtering. But the Liquid filter really abuses the CPU when performing 16 recursive passes. I put together a patch that compares the performance and behavior of a bunch of filters with regard to recursive filtering, and discovered lots of filter alternatives that I used in quite a few musical patches. I’ve been hanging on to …

Wow, I used both F2 and the Surge filters and CPU went down to “bugger all”. Slightly different sounds but I didn’t play to long with tuning. 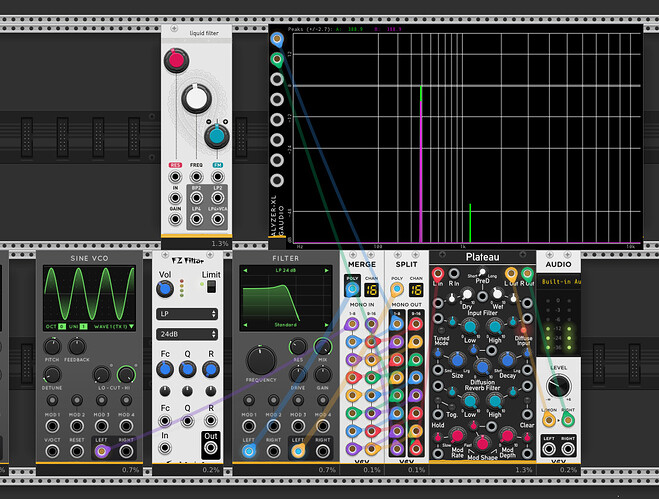 Well, sure, a lot of filters using 4 way SIMD. As you can see the Surge, VCV, and F2 are all pretty efficient when used polyphonically. Now if you want to see one that is an absolute pig, my Stairway is awful! (mind you liquid filter is similar to Stairway). 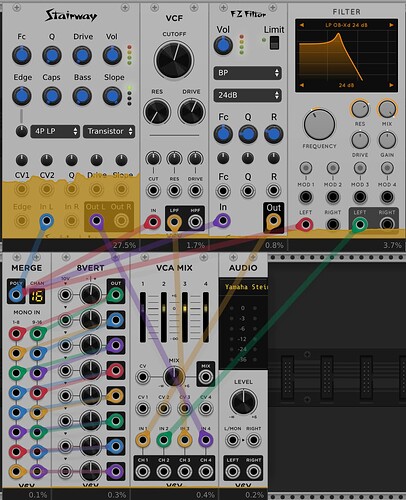 Ha well try vintage ladder for more cpu or lp24 for way less. Obxd is one of the heavier models.

That said - what does stairway do!?

Stairway is super slow because a) it’s really old. b) it doesn’t use SIMD. c) it’s 4X oversampled d) it’s a ladder type filter, but e) it has a selectable non-linearity in between each stage. It also has way too many controls on it, but they don’t add much CPU. It’s all in the manual, but it was supposed to be a mix of the matrix-12 filter, minimoog filter, the Rossum eu filter, etc… It didn’t end up sounding much like any of those but it’s pretty cool as its own thing.

If you are super interested… hey, wait, don’t go away! … the manual is here

update: I went and re-read that manual. It’s actually interesting (to me) and cites a lot of other filters that did similar things. And, since I wrote most of it, it’s still has some typos.

Oh, and another old article about using the performance meters is here

haha - thanks. But it really should use less cpu

btw, this is a perfect example of what I tell ppl all the time - the range of CPU uses by a module can vary a huge amount from one to another. rather than worry about getting some 2X out of your setup, you can often get 10X just by picking a different module.