NYSTHI Polyphonic Recorder: Noisy Output. Am I missing something?

I have a set of stereo signals going to the MSC Hack 24 channel mixer. I can use NYSTHI stereo recorder and save the ouput from the mixer to a wav file…no issue, sounds fine.

Any idea what could cause this? I am pulling left and right stereo signals into different channels…not sure if that would cause an issue. I’d like to have the channels split in the DAW.

Thanks for any help

I used it recently and didn’t experience this problem. Are you able to share the patch?

because you have to use NYSTHI module not a NYSYTHI

Haha, yes, typo in the title of the post…fixed.

Here’s the file…bunch of modules in it including host tho…
https://app.box.com/s/qgczauwgjs45y26od6lond3680k5wxqv
Hit reset on clocked to align everything…

Here’s a snippet of all the channels through the mixer out through the stereo recorder
https://app.box.com/s/5g42k6yhp9pa8ixhqgyaagcznc6pkkb4

I created a simple patch with two vcos and two lfos modulating their v/oct. I was able to use the polyrecorder with merge to record those two channels and there is no static.

I haven’t checked every channel in the wav, but the noise is present in every one i have checked.

The stereo channels are pushed to the merge in order, left then right, etc. Polyrecorder one is for non-percussion, polyrecorder 2 is for percussion.

I’m going to run a few tests to see if I can isolate what may be causing the static. One thing I can do is only polyrecord the percussion in one pass, then the non-percussion in a second pass. Maybe doing them at the same time is causing an issue…

I think it is because you are using two instances. I can reproduce the noise problem but when I record just one the sound is fine. Seems like a bug.

Yeah, something appears to be up with polyrecorder.

I modified the original patch so that each channel was attenuated so they weren’t coming in too hot…recording simultaneously still generated hiss and noise.

I then recorded with the two polyrecorders separately and the hiss and noise was gone. So there’s something about the patch that polyrecorder doesn’t like when recording out to two files simultaneously, and subsequently generates the extra noise and artifacts.

I really wish I could help but I’m just here to raise a similar issue with NYTSHI Master and VCV recorder.

This was completely random as I’ve relaunched Rack several times: either all recordings were perfect, or all had static.

This was really bothersome and made me sad, since I had produced a lot of tracks with v0.6 and never had this problem. There sometimes were audio glitches in my headphones while patching but usually, recordings were fine. Now I’m feeling doubtful that future performances will work.

Maybe there’s something in the API

Maybe we should try to use a single PolyRecorder, and then simply patch up to 16 mono channels (or 8 stereo) into it. That sounds like a limit that I can manage. I’ll keep you posted if I still run into troubles with this setup.

Almost like there are too many variables. I tested my patch that was generating the bad output by only having a single polyrecorder and it worked fine, no static. Only when I had the two polyrecorders saving simultaneously did it have issues.

However, that wasn’t the case with a different patch…simultaneous saves worked fine…

FYI all the nysthi recorders are self contained
nothing is global, everything happens into the module

Are you writing on SSDs ?

I’ve encountered this with two polyrecorders. One always works fine. There’s terrible noise in the individual tracks and they can’t be used if I have more. I record to an SSD.

I am recording to an ssd 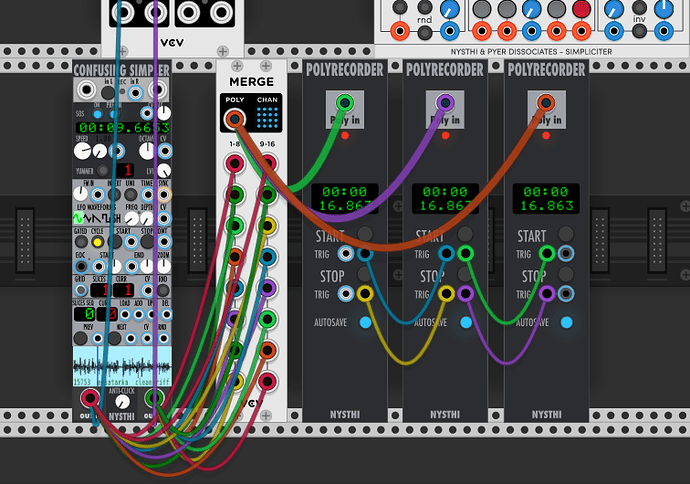 No distortion in when the resulting wavs are played back?