Just a brief note to let you know that counting all the modules : free, commercial and some not available by the VCVRack library, I have 3172 modules… I’m beginning to ask myself if I am affected by a compulsary disease…

As an engineering pragmatist might say, “Reinventing the wheel is pointless. It is best avoided by knowing all the wheels.”

I don’t have all the commercial modules.

I have all the free ones in the library.

I have nearly every module that’s not in the library that hasn’t been updated to v2, which I’ve done myself; still a few to do from the v0.6 days.

I only wanted to make a lin-arm64 build to make my own stuff again on this Chromebook kappa.

70 plugins folders, some are commercial (such OhmerPrems 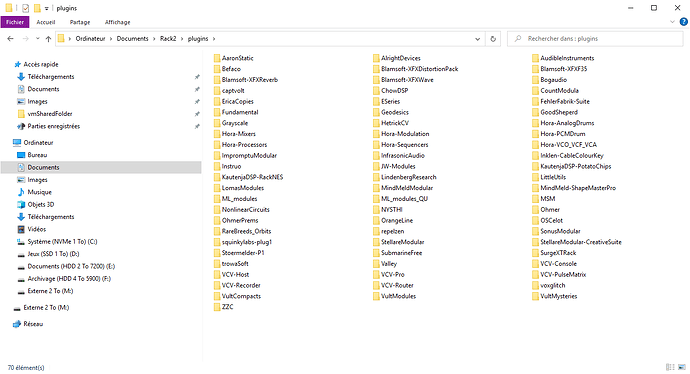 Got to catch them all! I have all free and most paid but not all. One day, lol.

I have far too many modules myself and I have even favorited too many.

But new shiny exciting modules are arriving constantly and there are surely 3 or 4 pay collections I’m still eyeballing.

I guess people with large collections of patches might benefit from a “read directories” and set favourites by usage to threshold kind of thing.

Wow, this is all actually mind blowing. I will date myself and relate that when I started on this journey the first synthesizer I had access to was a very early APR 2600 (had the wooden bar across the top and still an incredible instrument). It was in my first year in college and I had just seen the Moody Blues and of course had no idea how they did what they did but was seriously blown away. They opened the show with Gypsy; what a way to go! Later, I was walking down the hall in the rehearsal rooms and heard this strange sound. It was one of the professors working with the ARP 2600 which they had just obtained. I talked to him and was told that there was no course involving that but if I wanted to come by his office he would give me the key and let me work with it. No sequencer, tape machines or any of that. Just a 2600 in a room. I didn’t know the difference between the Mellotron (what was that???) and a synthesizer. I got the book by Allan Strange (the strange book, still a great reference) and was on my way. So, it is truly amazing where we have come from since those early days.