New Comp II module to use with Mind Meld mixers

We have a brand-new module out – Comp II. It’s a lot like ”Comp”, but Comp II is intended to be used in the send loop of the Mind Meld mixers. To make it work well in this application, we added the following to Comp:

And unrelated to compression, SFZ Player now understands absolute path to sample files. Which makes it easier to throw together lists of samples to play. 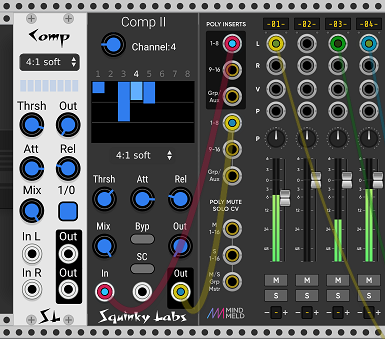 WOWWWW! Thank you Bruce! Long waited thing for me

Your Comp is somehow the one compressor that - out of the box - does exactly and nicely what I expect a compressor to do, so more of that? Thanks!

Thanks for the nice comments, everyone!

Thank you! Hope it works well for you.

the only thing that I miss are the ins and out like in the EQMaster, so that I need only one module to have all tracks covered
and no addidional stuff to route it.
I’d like to use it in line with the EQMaster.
That works pretty well with two of the Comp II.
So a ‘16 channel display’ version would be cool.

look in the context menu - set it for 16 mono channels. Is that what you want? My intention was that you could use it this way.

I think Stephan means having 3 poly ins and 3 poly outs for up to 24 stereo tracks total (like EQMaster has).

Personally I think 8 tracks works pretty well - so you can just use it on say the group tracks if you want (in nice a compact size) - and if you want it on every track then 3 x Comp IIs still fit in the space of 1 x EQMaster.

Oh, ok. It would be possible to fit three of them in the space of maybe two, and still have the meters visible. But hopefully using three works ok for now. And there is a way to label the channels on all three so that they align with the mixer.

yes Steve got it,
I admit it is nice and works well for the 8 tracks,
I’m just a lazy one so I would like to add just one module with the 3 ins and outs and not 3 modules for the same task.
Maybe you can keep a small and add a large version of it, the small with the 8 tracks and the large with ins and outs for the 16 tracks and the Grp/Aux, the GUI is fine and I don’t need to see more than 8 tracks at once.

Ok guys sorry but I’m a little dense. How do I patch this with the EQMaster in the loop?

I won’t do that unless Mind Meld makes a 24 channel EQ module. That’s fair, right?

urhm, it already is @Squinky.Labs … it can EQ all the AUX/Group channels… that makes your excuse moot

oh, right you are! thanks for pointing that out.

duh as I said I kinda dense right now