This question might already have been answered somewhere, but I could not find it.

How to use inserts properly in MindMelt MixMaster?

I understand you can use the POLY INSERT IN and OUT, to connect effects, the same way as you connect the EQMaster. This works fine when using the SPLIT and MERGE modules and putting the desired effects in between.

This seems a rather complicated setup to me, and I feel there is another solution I have missed. Is there a way to connect inserts like sends and then toggle them on or off per channel, or better, control the dry/wet ratio. 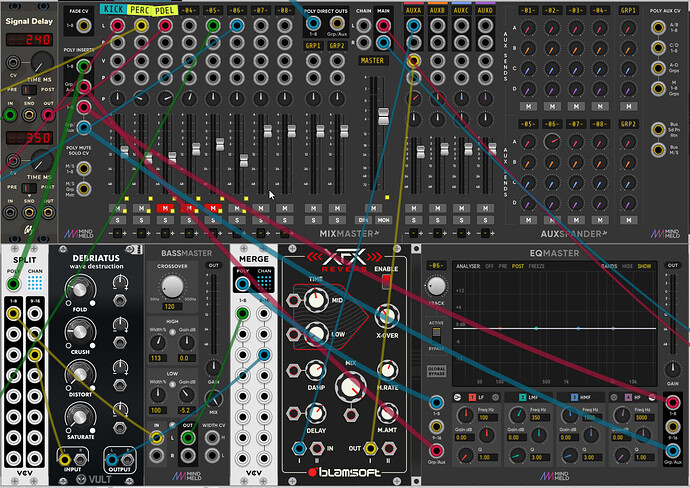 It’s important to understand the difference between the aux busses (send effects) and inserts.

To connect a send effect, you use AuxSpander as you have done with the reverb in your picture, you can then use the send knobs to control how much of the dry signal is sent to the effect.

Inserts are different - you generally don’t put ‘effects’ on the insert chain. It is there for signal processors like EQ and Compressors - things you might find on the channel strip of a hardware mixer.

The crucial thing to bear in mind about this kind of processing is that the signal goes fully through it - there is no ‘send’ or 'dry/wet" - the whole signal passes through the insert. The track signal comes into the mixer, gets diverted out into the insert chain, goes through the processor(s) on that chain then and comes back into the mixer. The signal is never split and thus there is no separate ‘dry’ signal chain.

Having said that, the processor you are using on the insert, like a compressor for example, might have it’s own built in dry/wet control - but that’s down to the processor allowing some unprocessed signal to pass through it - nothing to do with the mixer.

So to answer your question: “Is there a way to connect inserts like sends and then toggle them on or off per channel, or better, control the dry/wet ratio.” the answer is no*, because that’s not the job of inserts. That’s what the 4 aux busses on AuxSpander are for - just use those instead as they do exactly what you want.

“We’ve discussed the difference between inserts and send effects many times in these pages, but for the newbies, let’s spell it out: an insert slot is typically used for processors that change the whole signal — things like compression, gating, limiting and EQ, which can alter the character of the audio on the track — whereas send effects are typically used to add effects to a signal, such as by introducing delay lines or reverberation, while leaving the sound of the original track unaffected: you decide how much of the effect you want, using either the source track’s send-level controls, or the faders of the effect ‘return’ channels.”

Also, looking at your image again, you have some odd connections going on

For example, you have insert 1-8 out from the mixer going into Split. You are sending channel 1’s Left out (only the left) into BassMaster, which is a stereo processing module - it’s not going to do anything with that mono signal. Also the reverb send/return is only connected in mono. You’d be better off connecting all those things in stereo.

BassMaster is generally best added either inline on a stereo signal just before the mixer input (for processing one track) or between the main outs of the mixer and the audio module (for processing the whole mix). It can be connected on the insert but should definitely be done so in stereo.

Instead of using Split and Merge (in this scenario), can I suggest you try UnMeld and Meld instead which have the channels set up as stereo pairs and you can use the right click menu to load different background panels (1-8, 9-16, grp/aux) which make it much easier to see what’s what.

Another thing that’s important to understand about the inserts on MM is that when you take the 1-8 poly insert out from MM into Split for example, you are diverting the full signal flow of tracks 1-8 out of the mixer - you need to make sure the circuit is fully completed back to the mixer for all channels otherwise you will not hear your tracks. As you have it setup in your image you are only going to hear anything on tracks 1 and 6 at best, because the signal flow of tracks 2, 3, 4, 5, 7 and 8 is broken (goes into split and doesn’t come out again). This is another reason why the UnMeld/Meld combination is useful - UnMeld has a poly thru out which you can send directly to the In of Meld to carry all those channels which you are not adding processing on back to the mixer (saving you a lot of the patching you would need to do between split and merge).

Here’s how to connect the inserts and processors you have on 1-8.

Going back to your original question, Meld DOES allow you to turn the processing on/off (bypass) per track using the little LED buttons to right of each track pair - if you turn one of the currently green LEDs for tracks 1 or 6 off (red), you will hear instead the bypassed signal for those channels coming from UnMeld’s Thru output. 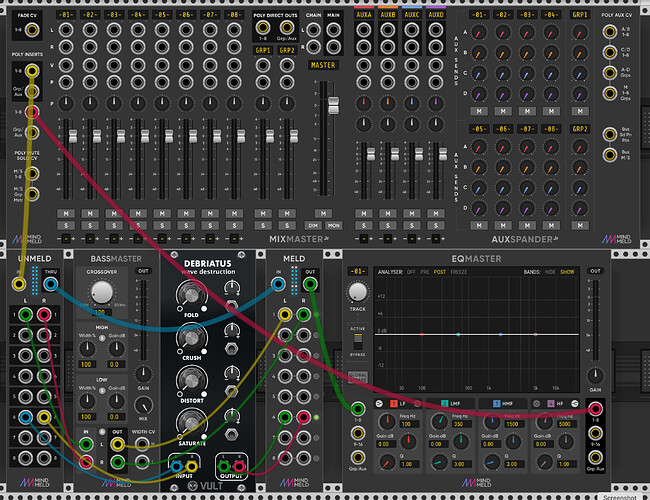 Thanks for your extensive replies. It is really appreciated!

Just tested the UnMeld/Meld modules and it’s so much easier indeed. The bypass buttons are exactly what I was looking for.

The original reason I started testing the insert functionality was the following.

I was making a percussion loop with a left panned, right panned and center signal with each their own ADSR’s (amp, filter, pitch) and their own channel in MixMaster. I usually just put my filters, distortion, etc. in line, but this means I have to copy all these modules three times.

I realize now that I can use a group insert to apply these modules to all three channels. And thus can bypass the module for a certain channel just by removing it from the group.

Glad to hear that helped - and yes, if you want to apply the same processing to multiple tracks, send them to a group and process that.

Also you can rename each track by clicking on its number. No need for labels!