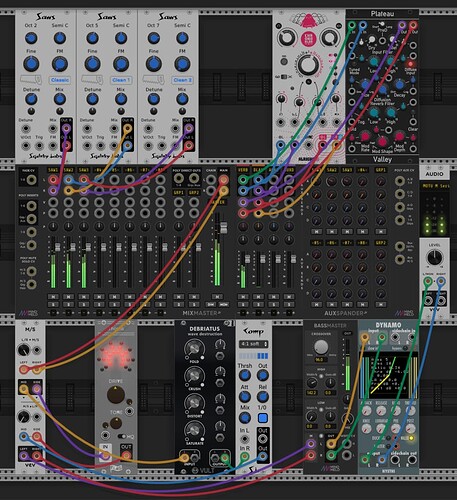 Similar to this thread, but with the wrinkle of new features and modules having been released since…

This is my ham-handed attempt to add a mastering chain like @Omri_Cohen recommended in one of his videos to a MixMaster setup. (Nevermind the oscillators, they are just placeholders to make some noise on various channels).

I have been trying (in vain) to use the Poly Inserts to do this proper-like, but I can’t seem to get my head around the right combination of MELD /UNMELD / M/S MELDER to make this work. Could some kind soul please enlighten me?

I’m not quite sure what you’re asking for, what you are trying to achieve, or where you are having a problem exactly so it’s a bit hard to recommend a solution…

What I can say is:

If you are trying to make a mastering chain, then you don’t need to worry about inserts, as they are per individual MixMaster track and for mastering you want to be working on the final stereo mix, which it looks like you are doing. MixMaster’s poly inserts are most commonly connected to EQMaster (adding 4 band parametric EQ to each MM track) and Squinky Labs Comp II, each instance of which adds compression to 8 stereo tracks.

Meld and UnMeld are similar to VCV Merge and Split, but with labelling tailor made for working with the stereo channels of MixMaster. Again, probably not something you need to worry about for a final stereo mastering chain.

MS Melder is a very ‘niche’ module that was made as a user request for doing Mid/Side EQing on each MixMaster channel when paired with a couple of EQMasters. It basically just saves a whole load of cables/patching… check out the mini manual for that on our MindMeld GitHub page. And once again, not needed for a mastering chain.

Thank you so much for the quick response. I seem to have been trying to do something that doesn’t make any sense to do! I’ll quit trying to do that now… =)