I’m new to VCV Rack and I’m looking for a master keyboard / controller
which can be used to contol various settings of VCV modules like sequencer run/reset,
clock speed, VCF parameters, etc.

Are there any sugestions especially for the german market with a prize up to max. 200€?
Any known incompatibilities or pitfalls?

In your price range, Beatstep pro works well, in control mode you have 16 knobs per midi chan.
same for the trigger. So 264 knobs and triggers
Works fine for me.

only one I’d avoid is the akai mpk series. and if you want actual nice keys, I’d avoid the korg nanokey studio as well.

that said, the nanokey is my daily driver, so your mileage may vary. 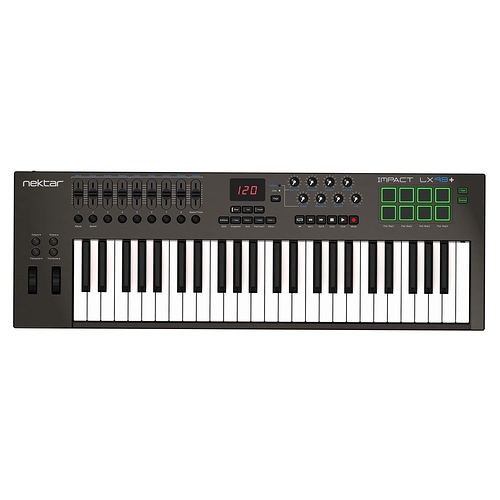 compatibility with midi devices is generally excellent just works with no setup. the roli music box thing has some limitations but still works well. really it’s down to your preferences

First of all, if you’re looking for sequencing VCV Rack with MIDI, something like with the BeatStep, you can face the problem of latency, unless you have a really strong computer. Usually, you will have to raise the block size to build “normal” sized patches, which means that you will have latency big enough to create sync issues.
If you’re looking to control some parameters with knobs and faders, and maybe also use a keyboard to enter notes and such, then I really recommend the Nektar Impact LX series. I got the 88 keys version, and it’s now for 250 Euros by Thomann. You can easily take a smaller version, which will be even cheaper of course, but I cannot say how the keys action is on the smaller versions…
If you looks for example at the LX49+ version, you got knobs, faders, pads, and some nice features all for 139 Euros. I have to say, I got much more than I expacted for this price range with the 88 keys, but again, I don’t know how the keys feel in the smaller versions.
Cheers!

Plus one for a Nektar. I also use the 88 key ver. 1. Reasonable keyboard, reasonable controls, reasonable price.

Keyboard-wise I liked my NanoKey and McMillen K-Board, although the velocity curves are a bit awkward to get out of them if that kind of thing is important to you. There’s also full size keyboards which lack the control surface (Yamaha) if you have the space; I used to use one of those. They can be had for <200$. You can sometimes get away with used or refurbished MIDI controllers for things like rock band; they had one meant for the game available for 20$, but had a full MIDI plug and otherwise worked just fine for note entry.

Controllers… well. I tried using a launch control and the nano mixer’s panning knobs as generic knobs for synthesizers and it isn’t all that fun. There’s a loss of precision at the far left and far right edges and it’s prone to triggering OCD fits; they work fine for controlling mixers (their intended purpose) but… yea. Behringer is supposed to have some nice knob boards that are any-purpose and have little LED feedback lights but those were >200$ when I last saw them. I haven’t seen control boards that were inexpensive.

thanks a lot for your replies.

Glad to hear your sugestion of Nektar Impact.

Indeed this is one of the keyboards I took in account. But after reading some revievs on it which were telling about compatibility problems with some DAW I was not shure if all it’s sliders and knobs w work with VCV Rack.

Glad to hear your sugestion of Nektar Impact.

Indeed this is one of the keyboards I took in account. But after reading some revievs on it which were telling about compatibility problems with some DAW I was not shure if all it’s sliders and knobs w work with VCV Rack.

Greg hooking up his Nektar Impact LX49+ controller to Rack:

But after reading some revievs on it which were telling about compatibility problems with some DAW I was not shure if all it’s sliders and knobs w work with VCV Rack.

MIDI is a fairly open standard. You can force anything to be compatible with the right leg work. (I have a Yamaha keyboard that for some reason doesn’t work with FL Studio, but if you turn “split notes” on then it works just fine, despite not actually being set up to split the keyboard in two. Go figure.)

Rack v0.6 doesn’t have MIDI Learn to control knobs with, so nothing is going to be compatible on that front. Although anything that sends knobs ought to work with CV wires.

Rack v0.6 doesn’t have MIDI Learn to control knobs with

Not quite sure what you mean but… the MIDI modules in Rack have “MIDI-learn”, which is why we can turn MIDI signals from any controller into notes, CV’s, gates and triggers in a Rack patch.

If anyone wants proper terminology, MIDI learn is an action where you move a MIDI CC parameter or MIDI note and the software “learns” the CC number based on the first received MIDI CC message. MIDI mapping is controlling some part of the software based on the MIDI CC values. MIDI to parameter mapping is what Rack doesn’t have yet, but it has MIDI to CV mapping.

That’s clear Andrew, thanks. So - if/when Rack gains MIDI to parameter mapping, as you described above, will that mean that we can control any knob/fader/switch on any module via MIDI, whether it has a CV input for that particular thing or not? And would that still be via the MIDI* modules or via some new “MIDI bus” or something?

It will be a new Core module that looks like MIDI-CC but instead of output ports, there will be a way to select parameters on other modules. An indicator will be displayed on the parameter when it is mapped. I don’t know the name yet, probably MIDI-MAP.

I have a problem with my akai apc20: i’ve got 8 faders but the midi cc module sees each of them as if they were a single one. Is the controller the problem?

run the configuration software and check which cc value each fader is manipulating. if you set them on different cc values, vcv rack should pick them up as separate.

Yep, with Automap i can change the cc values of my launchpad. It doesn’t work with the APC 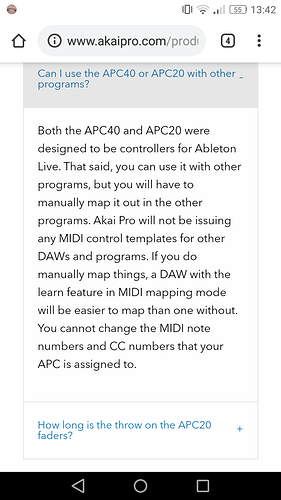 there must be some differentiation between the sliders for ableton to pick it up. according to akai, it uses simple midi messages to communicate, but live handles most of the session and scene stuff internally. Does it send each slider on a different channel perhaps? The Midi-CC plugin does listen to all channels by default, so if it’s getting the same CC numbers on different channels it would merge them. Would be weird tho. I can’t find anything on how the apc20 is mapped out online, the apcmini is mapped very simply: https://d2r1vs3d9006ap.cloudfront.net/s3_images/1143703/apc_mini_midi.jpg?1421447412

I assume the apc20 must be mapped differently.