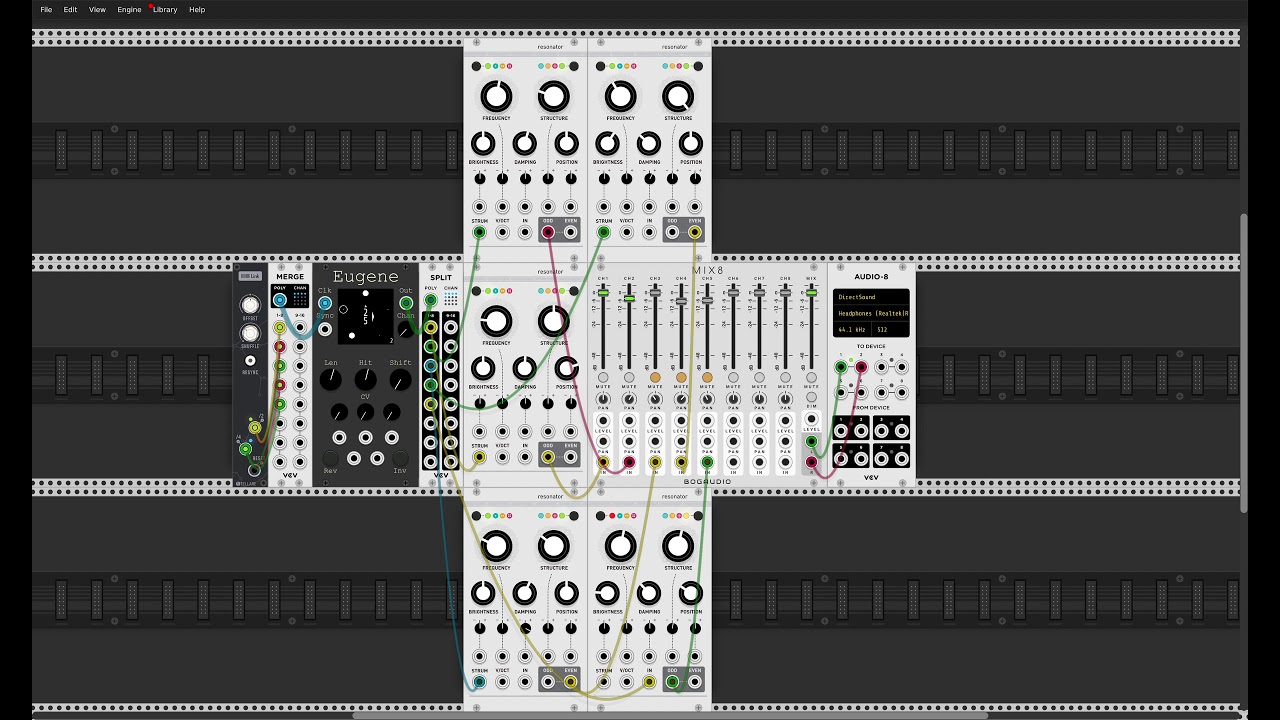 Euclidian module - #6 by dag2099 asked whether I could add polyphony to my Euclidean rhythm module, so I had a go at it this weekend.

My concern now is around compatibility, if I change the switches to push buttons I imagine patches that used the first release will now behave oddly, I can’t see any option to select which module version you want to use. I could put a menu option in to preserve backwards compatibility. I’m quite new to VCV Rack so don’t know how much of a problem new module versions breaking old patches is.

I recommend you make a separate Poly version of the module. Perhaps call it “Polygene”.

Polygene, I like it! Might be for the best, I could just add backwards compatible changes and improvements to Eugene and I can do whatever I feel like with Polygene.

At some point I’d like to make some hardware and VCV Rack seems like a great way of prototyping. Just have to be careful getting carried away with things that won’t translate easily to a physical module…like polyphony…and expensive graphical displays.

if you want hardware compability… maybe some internal logic functions would be a good compromise. that’d only add a rotary switch and an additional outport. (or maybe x2).

I’d add two suggestions by the by:

in hardware these would be great to have even for a 1-sequence module, since it’s annoying af to do it with utilities. always ace to have options for changing up eucl. rythms.

with polyphony/sequence variations in place,

That’s interesting, it hadn’t thought about ‘channels’ being useful even without polyphony as a way of saving multiple sequences and switching between them. I’ll have a think about the ways I could incorporate probability too.

Accents is another thing I’ve seen people do, I wasn’t too interested in that, but I guess you get it for free with polyphony, needs some extra hardware for mono though.

Thanks for the ideas!

if you take a look at my module, the Quad Algorithmic Rhythm, you can see that I have implemented some of these other algorithms, including Golumb Ruler (maximum uneveness, as well as Well Formed and Perfect Balance algorithms. I also have expanders that add probability, microrhythms, irrational rhythms and warping.

I love the idea of a polyphonic eugene. I am using it mainly for sequencing funky rhythms and sometimes there are >5 eugenes in my patches. One thing, I would like to see in a polyphonic version would be some kind of visual representation of overlaying steps.

If the selected sequence is always represented with white dots, it would be nice to show another selected sequence in another color. For example: I select the first channel for basedrum and enter some values. I activate “overlay” for that channel. I switch to channel 2 for snare and see channel 1 as red dots, the active channel 2 as white dots and all steps that are identical in both channels as red/white dots. 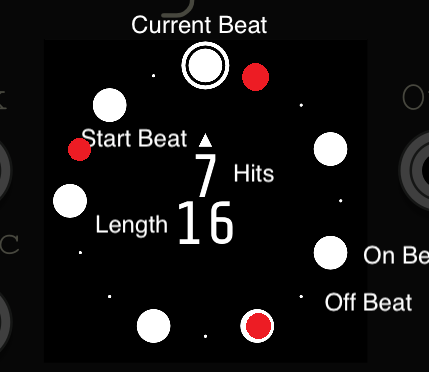 Sorry I didn’t respond but I did read it and your idea has turned into something a bit different, but I think looks really cool. All 16 rhythms displayed at once!

It’s currently with my ‘designers’ (aka brothers) so might be ready for releasing soon. The second ‘inv’ button randomises the current channel (will be renamed). Also I’m adding a button under ‘sync’ so you can manually press to sync all the channels. The unnamed knob cycles through rhythms that are close to euclidean, so you’re not stuck with just euclidean. 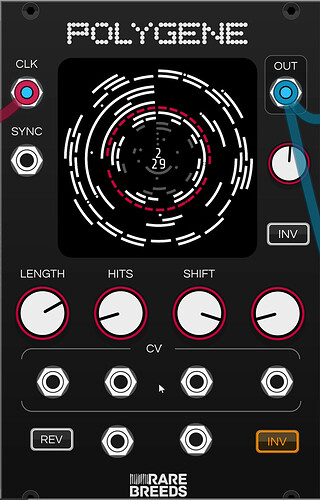 This looks super dope! Can’t wait to have a go at it once it’s released!

that new UI seems really familiar. what was the inspiration?

Nice. I am very looking forward to use it. In case your brothers need some design input, I made a quick MSPaint-Mockup, because I think the visualization needs a little bit more space: 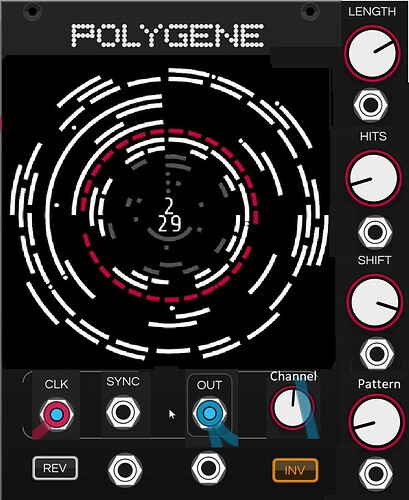 ah, my brother actually came up with the idea and he doesn’t use VCV Rack, but yeah it is pretty quad algorithmicy isn’t it. Beats as dashes around a circle, each layer being a ‘channel’.

Yeah I agree, we also thought we needed more space for the display, I’ll send them your idea. Although maybe it looks even more like quad algorithmic rhythm like this.

Ups, you are right and that was absolutely nonintentional. On the other hand, how many ways are there to visualize 16x32 steps? Circle, Grid, Circle, oh wait…

Unless you are into some fancy 3D-Cube or -Sphere-Programming there are limited possibilities in 2D. I would not think of polygene as a graphical knock-off of the quad algorithmic sequencer (which is very powerful with all it’s extensions) but as a simple and easy.to.use.and.understand euclidian sequencer.

Here the knobs do not show the setting of the selected Rhythm? While the REV and INV buttons do?

Yeah that’s the current behaviour, the reason I did it this way was to keep it so it was possible to make in hardware. Lights are easy to update to the saved channel settings…motorised knobs sound a bit harder to come by. Although given that it’s a polyphonic module maybe I shouldn’t care, I’ll try out auto-updating them as the channel switches.

Polygene has made it into the library!

Thank you to everyone on this thread for all the input! Plus @VCVRackIdeas for his video and EOC idea, and my brothers for making it pretty.

Let me know if there’s any problems.