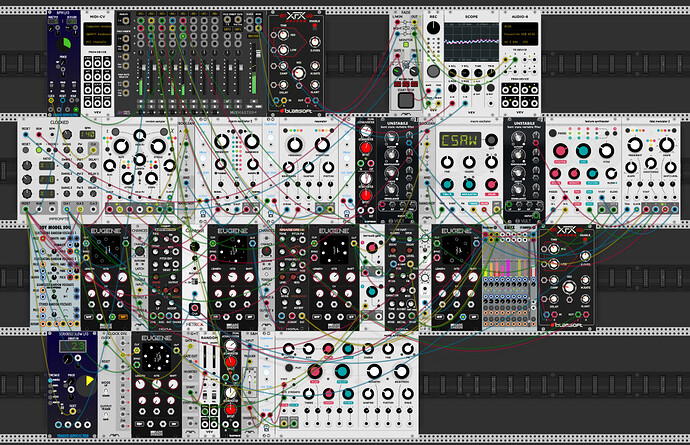 well, i guess i can’t say that I’m first this time! nice work.

For this VCP-59 challenge, I’m using Rarebreed’s Eugene to generate both rhythmic triggers and the pitches for the VCOs. Each row has the same setup, just different settings for the modules. Each Eugene sends a trigger to the ADSR and also a Nythsi 208 Random module (That will convert the trigger to a pitch voltage). VCO is an Everlasting Glottal Stopper. Filters are Formant and Unstabile (set to band pass) Almost everything is modulated with the Instrou Ochd LFO.

Normally, I would quantize the pitches, but I liked the way this sounded without it. I also would have probably set up a Bernoulli gate or something to break up the meandering lead part…but I didn’t.

For VCP-59 challenge, I'm using Rarebreed's Eugene to generate both rhythmic triggers and the pitches... 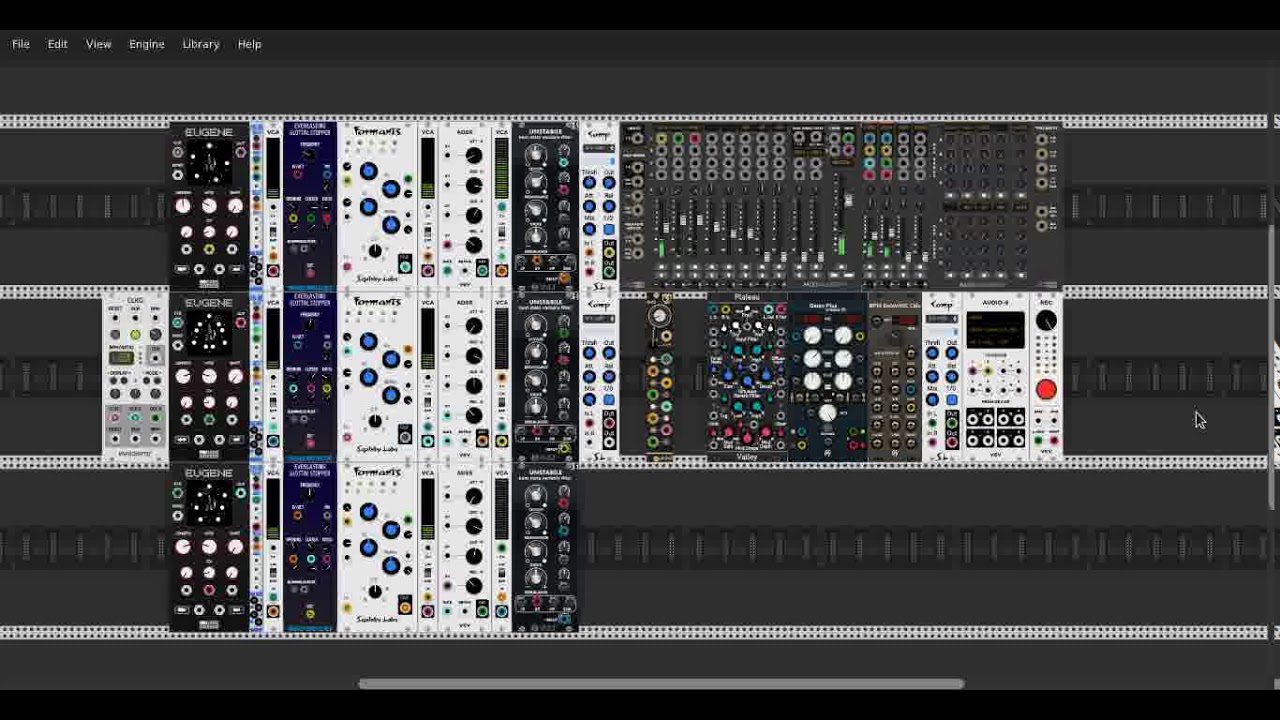 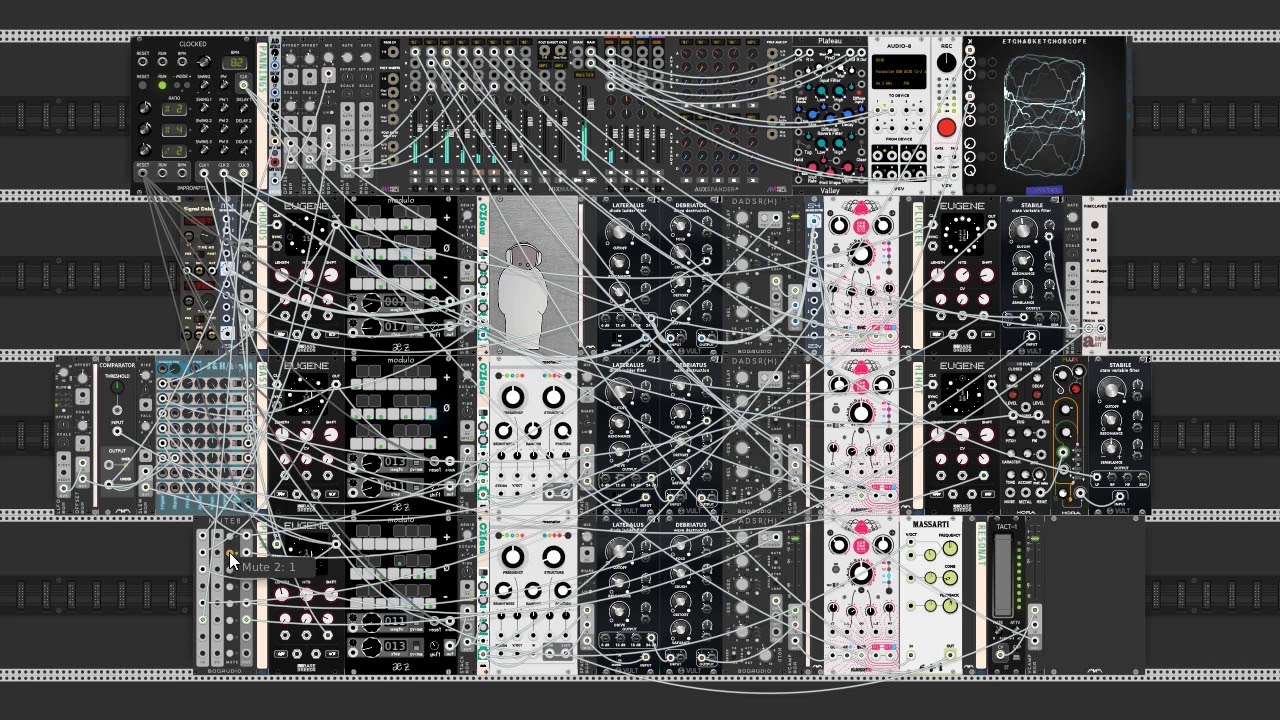 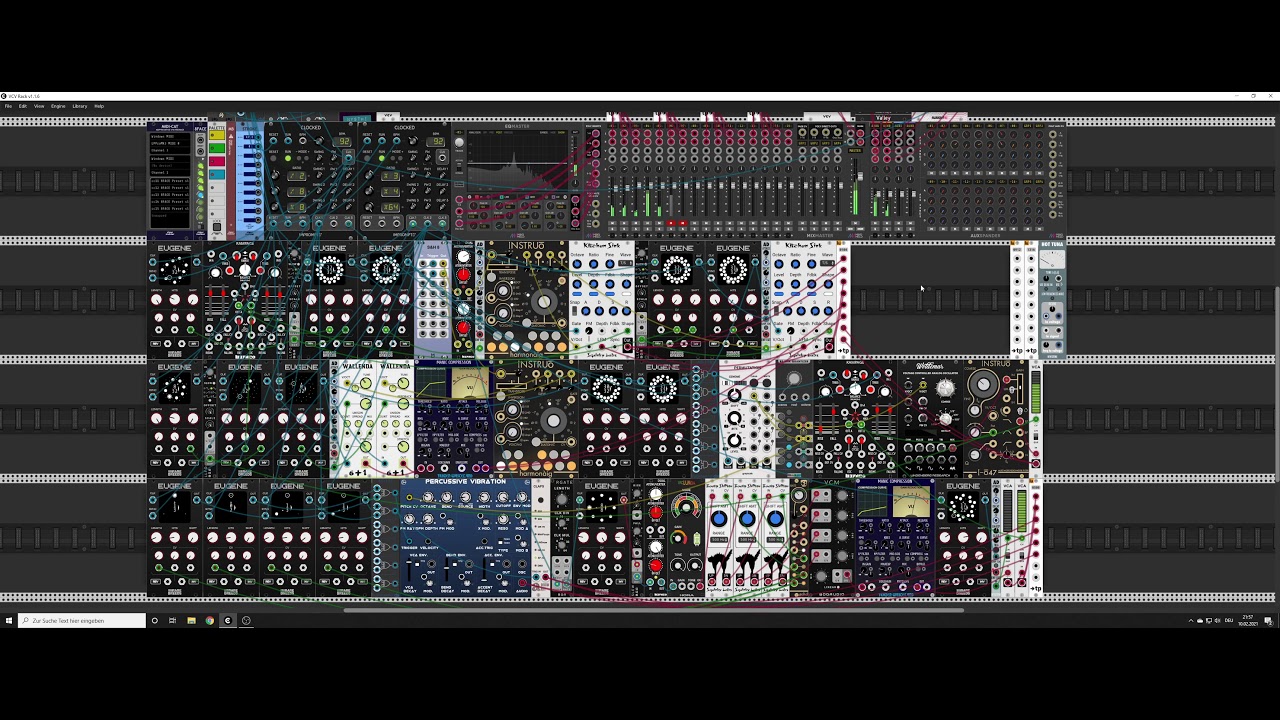 my entry for the vcp challenge #59

The first and parts of the second row are Burst-Style Eugenes which are randomly triggered by another eugene. The Bursts are Eugenes, where an AD-Envelope is modulating the number of hits and the Envelope is triggered via a eugene where the one hit is shifted by an LFO and every time the shifted hit overlaps the clocked step it releases a trigger. The sub is trigger via two eugenes which are clocked by the bursts and whenever both of them outputs a trigger at the same time, permutation is generating a note for the sub. The main melody is using the trigger from a bursted eugene as a sound source for two wallendas. The drone is a massively accelerated Eugene, I then offset and slewed the resulting squarewave and modulated it via modulated pitch-shifting, distortion and compression. Finally the Basedrum and Clap are inspired by the substation polyrhythmic sequencer, where each eugene is set up as a clock divider running into an XOR. The clock divisions are modulated by ochd.

See, this is where a polyphonic version would be pretty good.

Polygene should be with us soon

Sorry I didn’t respond but I did read it and your idea has turned into something a bit different, but I think looks really cool. All 16 rhythms displayed at once! It’s currently with my ‘designers’ (aka brothers) so might be ready for releasing soon. The second ‘inv’ button randomises the current channel (will be renamed). Also I’m adding a button under ‘sync’ so you can manually press to sync all the channels. The unnamed knob cycles through rhythms that are close to euclidean, so you’re not s…

One more from me. A quick microtonal melody for VCP Challenge 59. Sequencers are Eugene by Rarebreeds. VCOs are Chebyshev by Squinky labs.

The top Eugene handles the pluck. The bottom Eugene handles bass and drums/perc. I came up with a little melody that’s not too dissonant. If you don’t like microtonal stuff, it still okay on the ears. 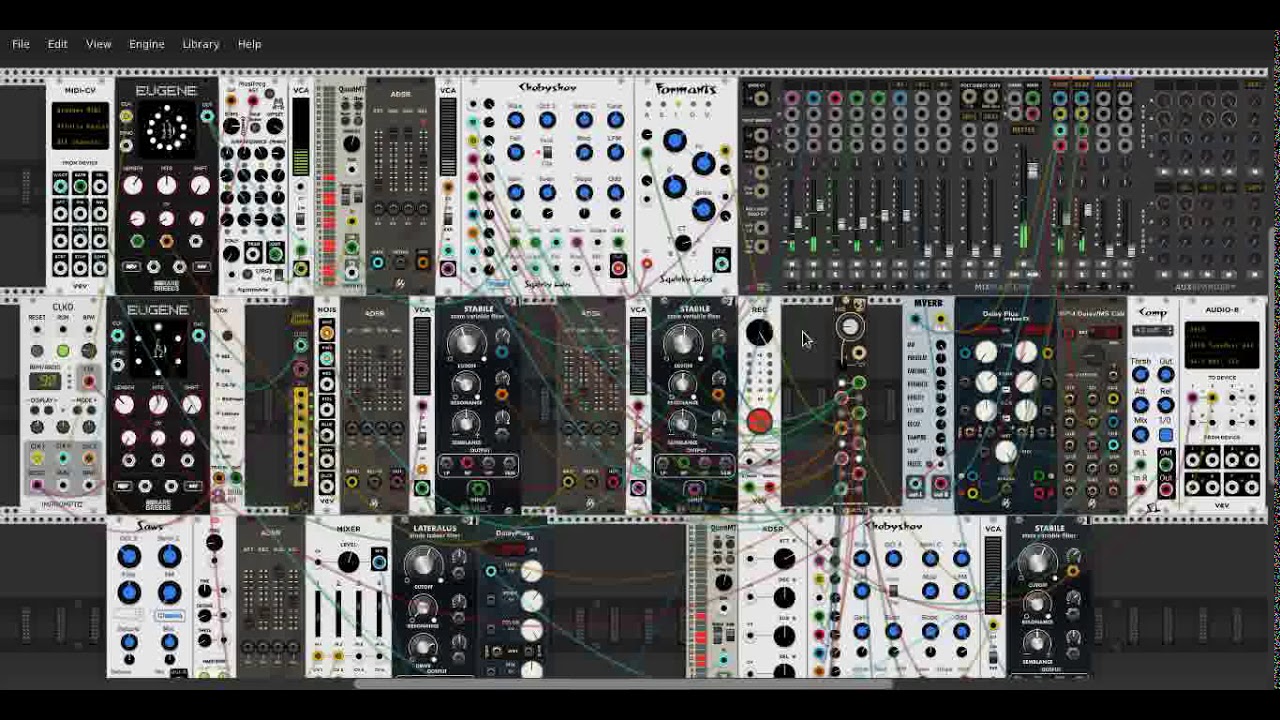 A quick microtonal melody for VCP Challenge 59. Sequencers are Eugene by Rarebreeds. VCOs are...

My entry for the “eugene” challenge … 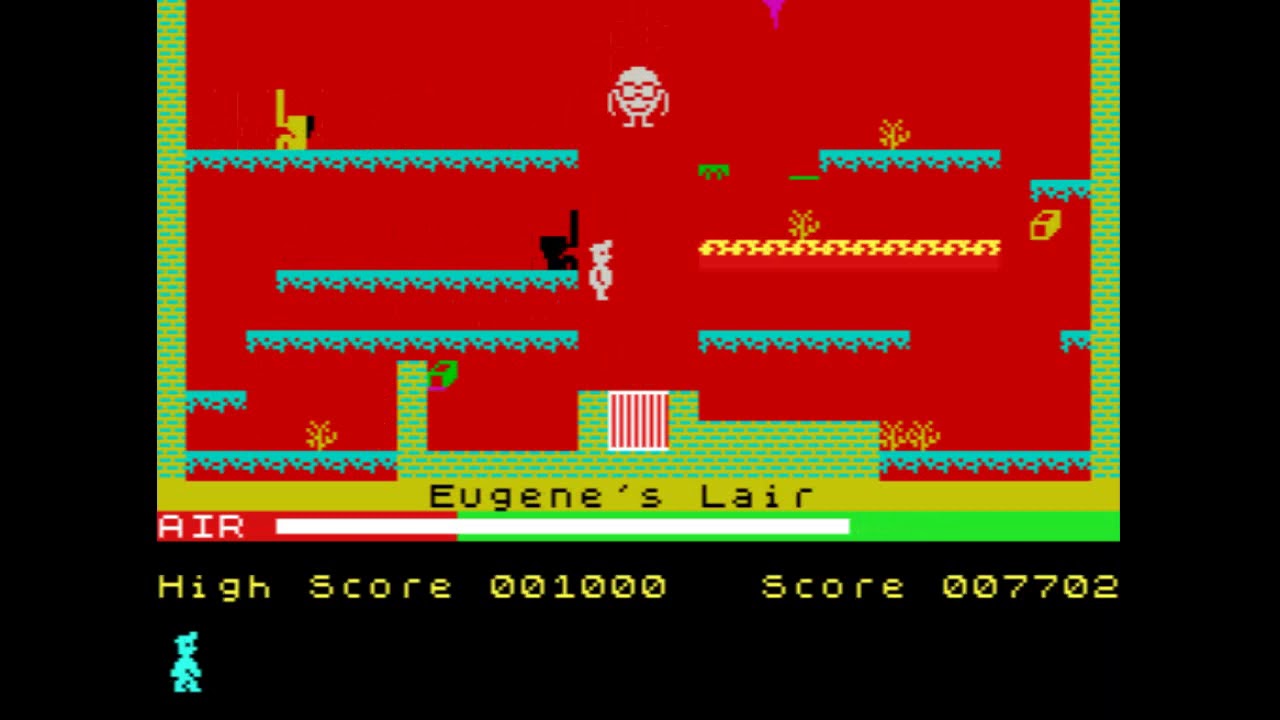 Nothing special here: the two Eugene euclidean sequencers are used to trigger the quantized sample and hold HoldMeTight which is receiving a simple LFO signal. Chronoblob2 delay and Plateau reverb add a little bit of movement. As an extra (nostalgic) bonus you can see how to solve the level #5 of the great ZX-Spectrum game Manic Miner. 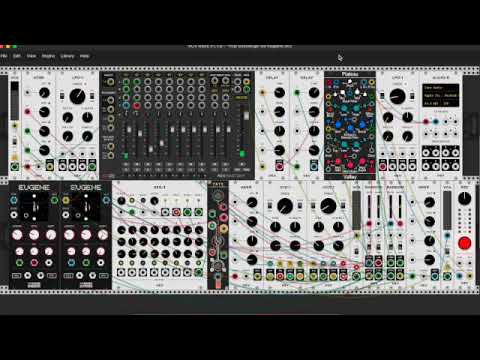 Showcase of the Eugene euclidean sequencer 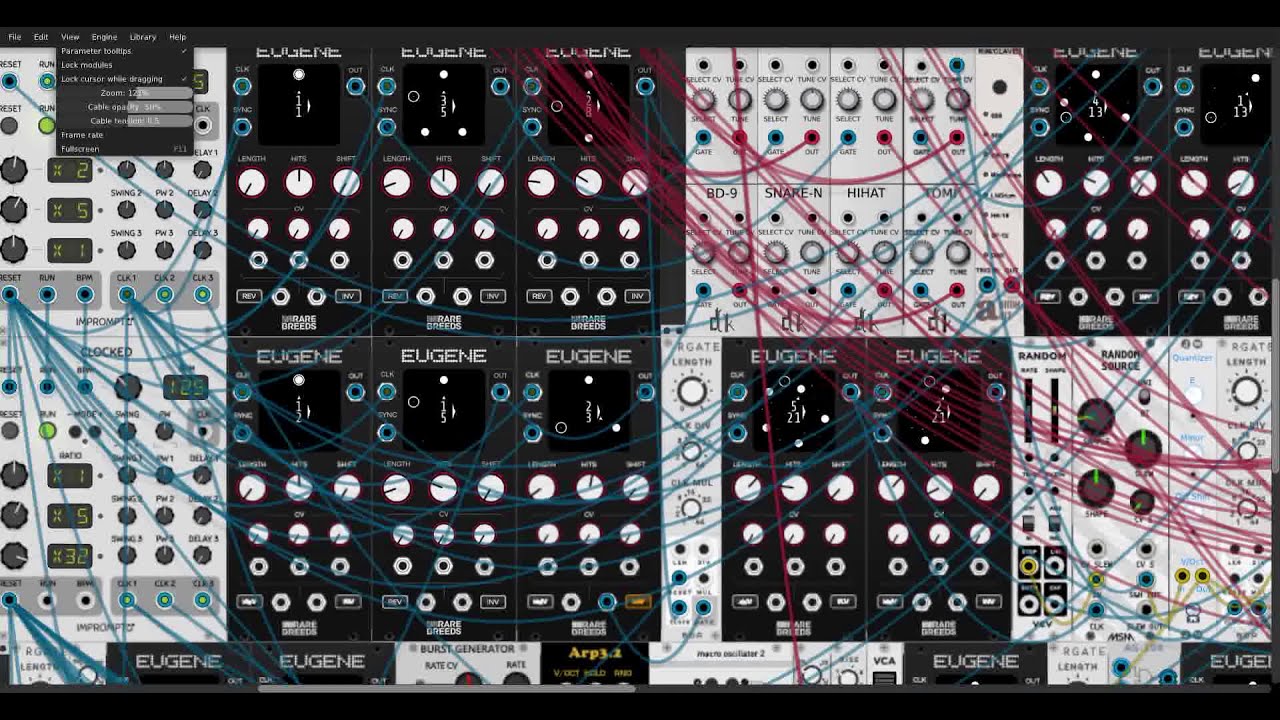 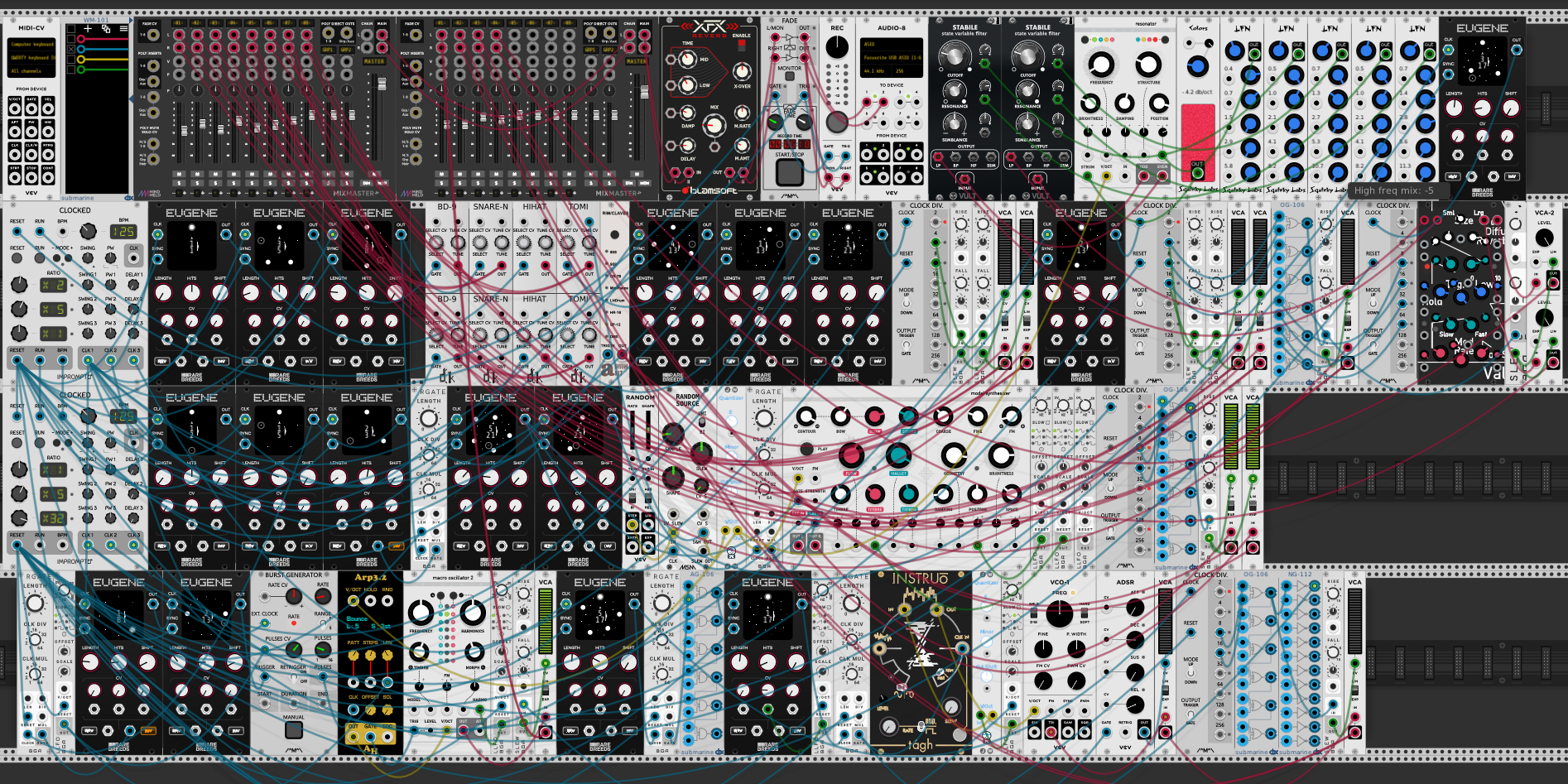 this time I tried it again : 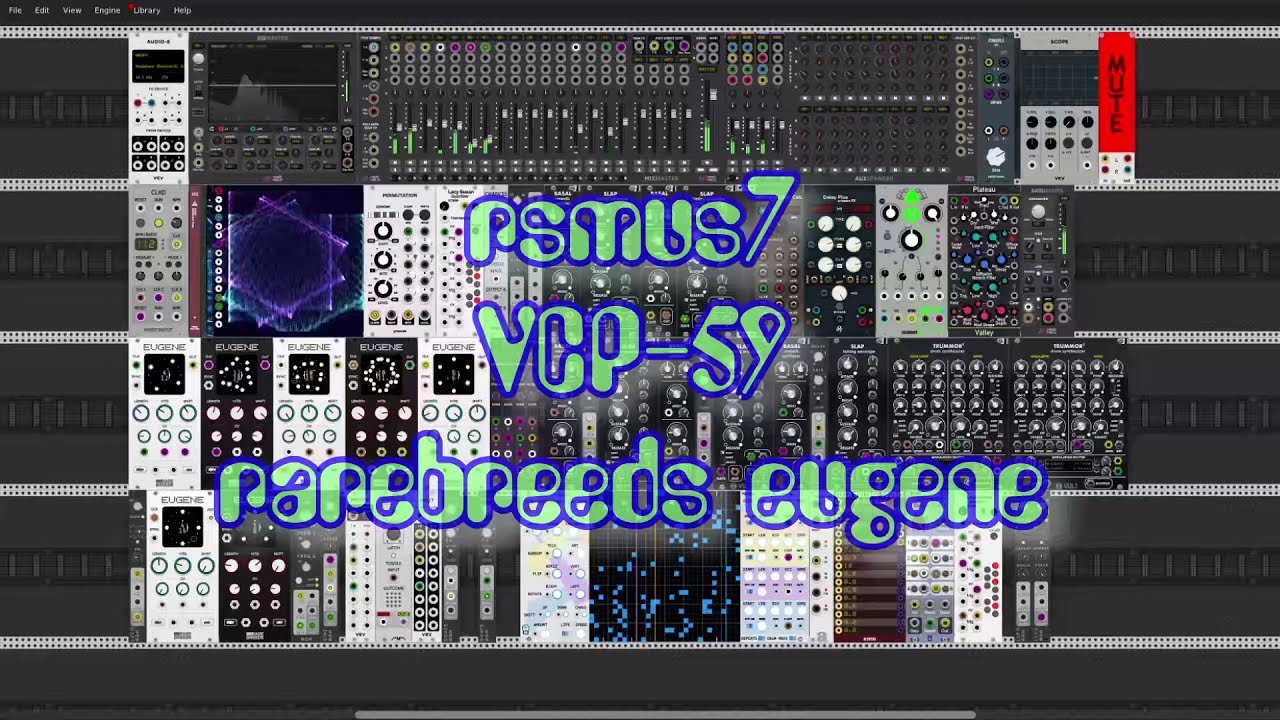 Hi !
This is my first time playing this game, this is fun

Here’s my entry for some ambient droplets :

I also wanted to make some kind of control section (top left), so here it is: 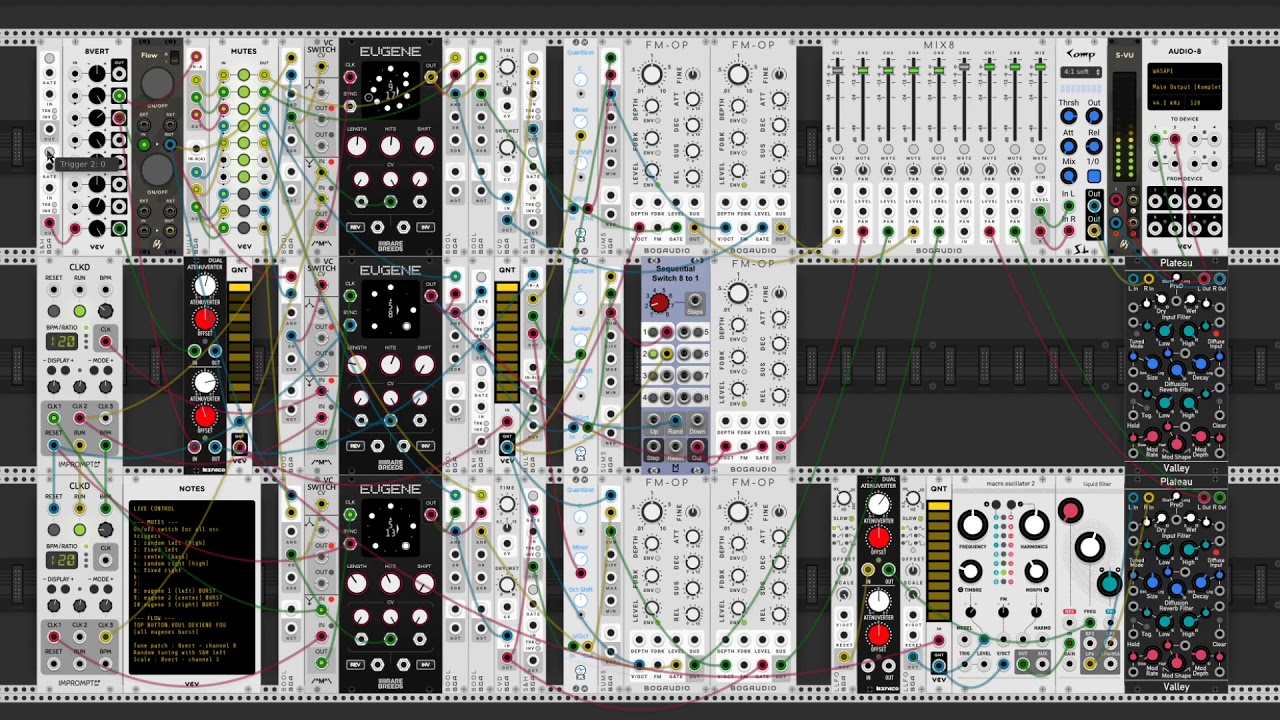 Here's my entry for VCP Challenge #59. I went for some rainy sound, and experimented...

This is the first time I’ve tried to make anything more than a few rhythmic beeps in VCV Rack.

I used a handful of Eugenes chained together out → clk → out → clk to get some slower melodies playing chords under a faster melody. The outputs are merged into a polyphonic signal used to trigger VCO.

Frozen Wasteland’s slow LFO increases the ADSR release length and increases how much of the high pass filter from VCF is audible over a couple of minutes.

Walk2 is giving me a random melody that I sample and holded and quantised. 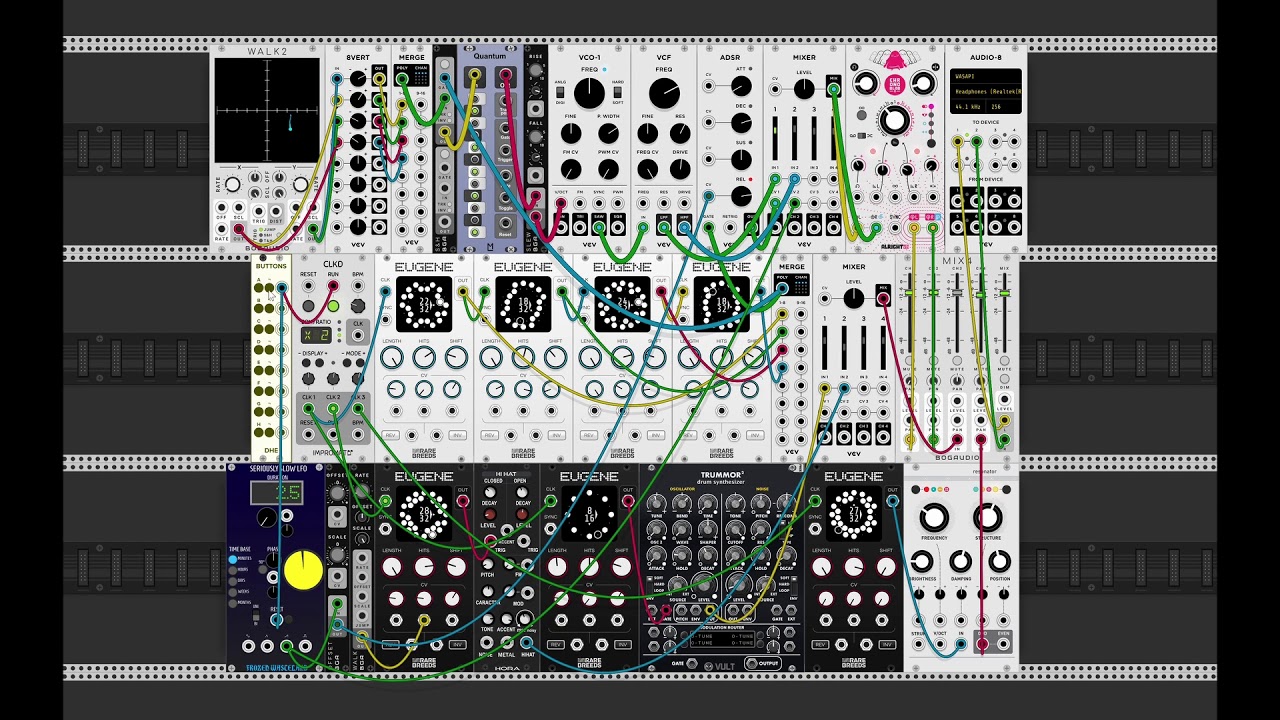 My entry for the vcp-59 challenge. I'm the developer of Eugene, but this is the... 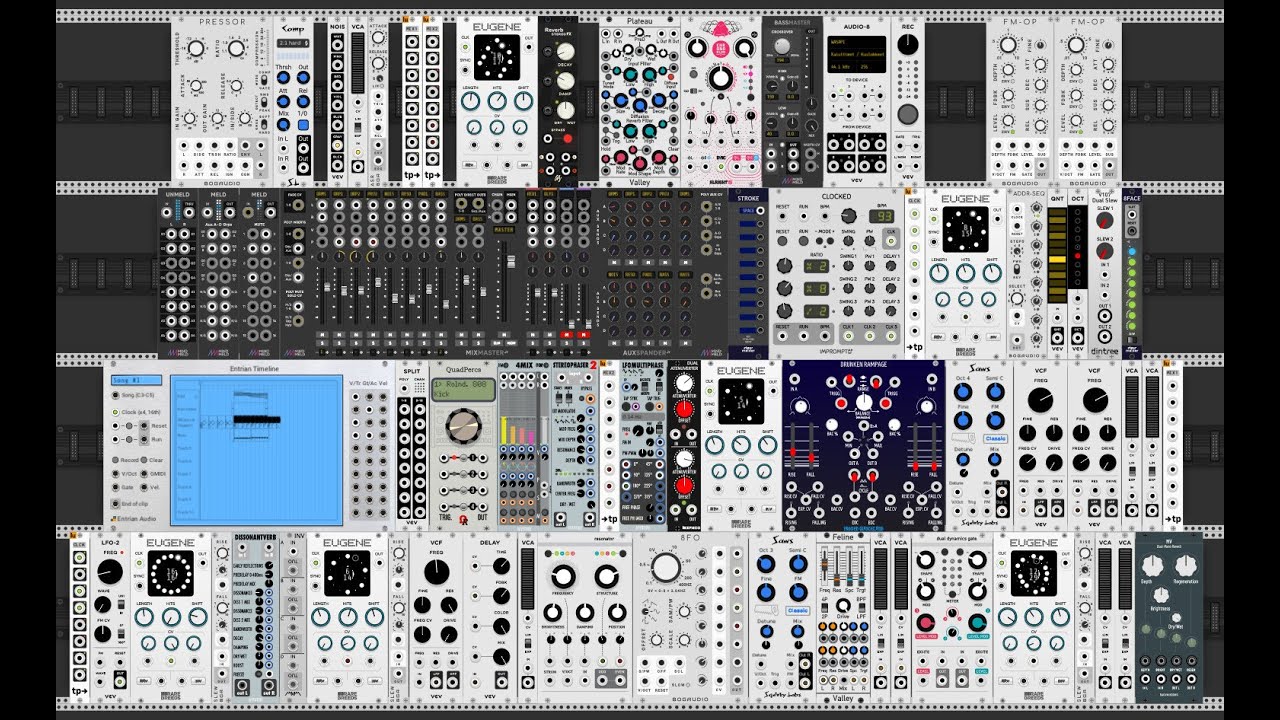 I did what I usually do this time: Some phazing melody stuff with a drone underneath. I sort of wish I had some better ideas than that but it’s what I have gotten used to doing. The melody bit is slightly unusual in that the two modulating operators are triggered by the opposite triggers of the opperators that make the noise. The end result is FM that moves in and out of itself. I think it sounds pretty interesting. The drone is two Eugenes triggered by an LFO with it’s rate sequenced. The whole thing is controlled by Jooper in the standard fashion.

I’m going to be a “Negative Nancy” for a moment. I couldn’t get the sync function on Eugene to work consistently. This was not a problem while using it as a drone voice but it was pretty annoying while using it to trigger my melodic stuff. Maybe it’s operator error but I expected it to always sync to the 12 o’clock position but it didn’t.

Other than that, here it is. All feedback appreciated: 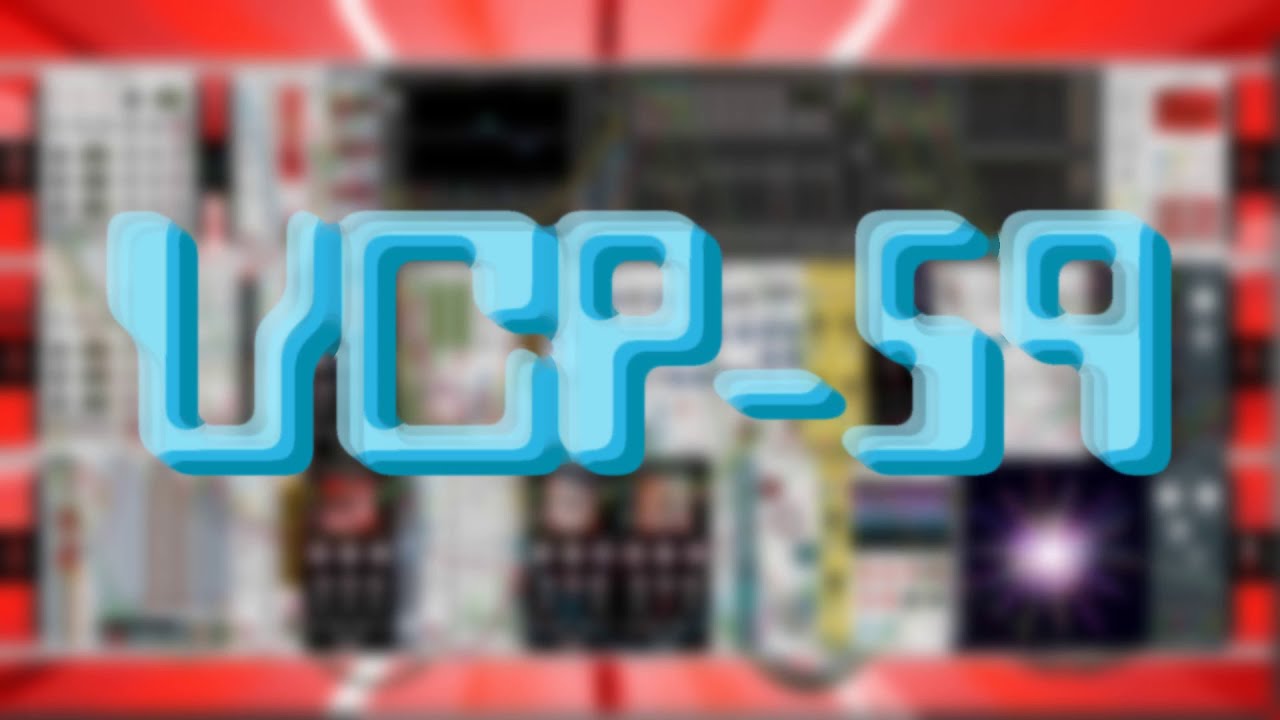 I noticed it has a weird behaviour after I first released it.

When sync is triggered it should always reset to 12 o clock, but for sync to be triggered the input needs to be high when the clock edge rises. In practise that means sync doesn’t work with short pulses, which makes it pretty useless. I should probably treat it as a bug and change it on Eugene, it’s something I’ve already changed for Polygene.

not sure I am allowed to enter without a video (I will try to have a yt account in place before the next vcp), so consider this unofficial…

a sequence of dark ambient sound

not sure I am allowed to enter without a video

yes, you are. the rules specifically state to upload a video if possible.