Is anyone interested in a reference handbook for every module in Rack?

Hello,
I just want to ask if anyone would be interested in a reference ebook for every module in Rack. This will be in German 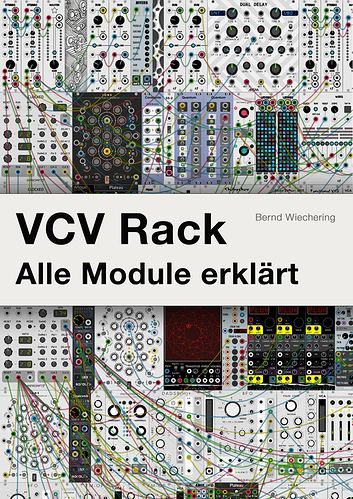 Oh, sorry. Missed the “ebook” part. (because it looks so real) Yes, interested!

I can’t say I’d be very interested in a German version myself, but that aside, I’m sure you must appreciate the sysiphean nature of the task if you are intending to keep it upated.

A little over a year ago I began a website, spent money on commercial WordPress plugins, to build a types based online database of all the modules. Unfortunately I had to abandon the project mid way through due to my partner becoming seriously ill.

There were about 400 modules then; I have 1447 in my Rack installation now. It took me an age just to screen shot those modules, and many of those have had changes since and would have needed it again.

Don’t let me discourage you - if you pull it off then you have my utter respect. If you do attempt it, if you search the FB group, Frank Buss published a Rack fork way back with a Python script, that could auto generate all the module faceplates (that was after all my screenshot extravaganza !). That will save you a heap of time if you can get it working.

Yep, you’re right. It is something you could not do in a few months. And I think I have to filter out some stuff

… I was also thinking about an online version, because it’s easier to keep it up to date…

Would a lightly-structured wiki be better? Authors and/or fans of particular modules could create and maintain pages for those modules.

With the new metadata in Rack 1.0 plugins, some of this information could be populated automatically from the plugins themselves.

@Richie Absolutely. If the faceplates and all the metadata can be automagically extracted then we’re half way there already.

I rapidly appreciated that this was a job beyond any one person !

Yep, a wiki would be the best option

…and I think English might be the better language…

I just want to ask if anyone would be interested in a reference ebook for every module in Rack. 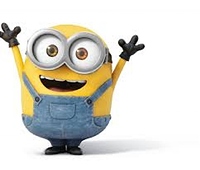 This will be in German

In order to contribute your German documentation effort in the most constructive way, you should focus on the following things

The only way I see that this could be done, in a way that will help a significant number of people, is to collaborate with someone who wants to tackle the task of creating the future “Modular Grid” for Rack plugins (which should use the plugin.json metadata files), convince them to internationalize their site, convince them to add a comment or wiki section, and write about each module in those boxes.

IMO any information you write now without forethought of the distribution, organization, and updating, will be seen by no more than a couple hundred people and then be buried and lost to time. It’s harsh, but that’s the nature of writing. It must be organized and “advertised” (i.e. by posting on the likely-popular “Modular Grid”-like database). People will not come running to download your book—you have to give them a reason.

Ok, I decided for an online resource … a wiki. Something where every module page looks some kinda like this: 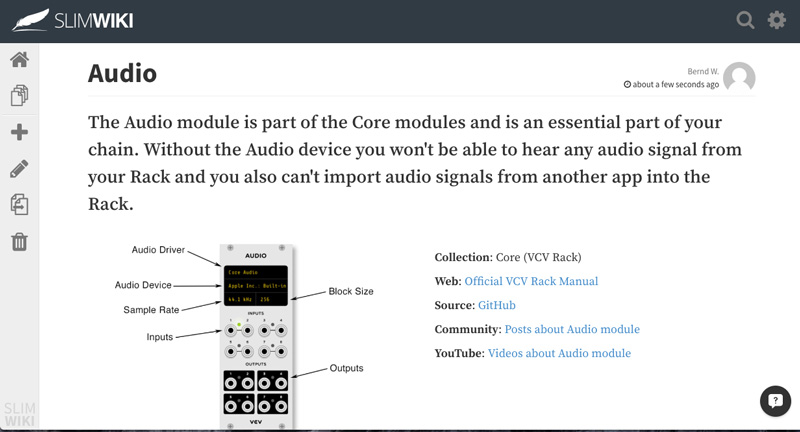 I think a wiki is a good idea.
My anti-virus warns me about slimwiki.com if thats where you are hosting it. But could be false positive.

Try take a look at https://meta.miraheze.org
Its is also free and its run by open-source and donations, but without the same limitations you have on slimwiki (1 admin, 1GB etc).
I made a wiki there, and I was quite satisfied with it.

Thanks for your tipp. No, I don’t want to use SlimWiki. I was just dabblin’ a little bit. I think I will self-host a MediaWiki. But I like the look of SlimWiki … very nice.

I think I will self-host a MediaWiki.

In my opinion it is a good idea to setup a wiki if its something we can all edit in, keeping up to date with 1000+ modules is a little daunting for 1 person.
And if you host it, will you supply regular backups of the entire wiki to the community, so all can not get lost? I think that needs to be done to give confidence that all our edits and uploads wont suddenly be gone if you lose interest in VCV and pull the server down.
Maybe also could also ask Andrew Belt to use wiki.vcvrack.com as domain.

I also think such a wiki could hold not only references on modules, but also info on Rack, developing info and help, maybe news etc. And it could be multi-language.

I think Andrew’s larger point is that at least some aspect of this will need to be automated in order to remain current — and therefore trustworthy to your target audience — without the ridiculous amount of effort it would require to manually update a module’s page every single time the module or plugin is updated.

A wiki would be perfect for this task, since it is a dynamic and constantly changing application which doesn’t require much effort to update, unlike a static PDF document which would need to be exported and redistributed every time any minor detail needs to be updated or corrected.

If you figure out some way to automatically import and parse the plugin.json files for each plugin, then use that information to update the affected module’s wiki page automatically as details change, your project would already be halfway finished. All that would be left for the users to do is edit the resulting pages to add usage instructions, tutorials, example video/audio, etc.