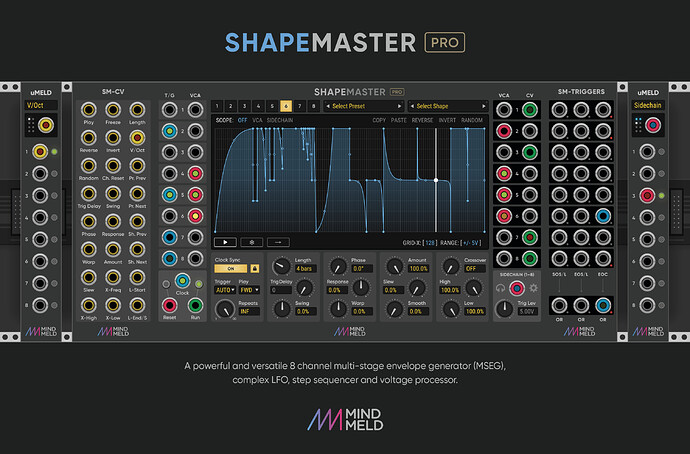 Citizens of the Rack Federation!

Since the release of BassMaster nearly a year ago, Spock (Marc) and I have been exploring strange new worlds, seeking out alien technologies and boldly going where no developer has gone before… These discoveries have resulted in a highly advanced new module that we are excited to finally release today! (at least I am, Spock doesn’t really get excited… )

You can draw in your own envelope shapes, generate random shapes, or select from hundreds of built-in shapes and presets, some made by talented members of the VCV community.

In the free version, envelopes can run freely (unsynced) with cycle lengths from a fraction of a millisecond to 30 minutes long. In ShapeMaster Pro, they can also be hard synced and quantised to external clock with cycle lengths from 1/128 to 128 bars long. Envelopes can be set to run automatically, when sent triggers/gates, or when triggered by audio from the sidechain input.

Nearly all the controls on ShapeMaster can be set independently per channel - the only global controls are the run, reset and clock inputs. ShapeMaster’s controls allow envelopes to be reversed, inverted, frozen, sustained, looped, repeated, delayed, phase-shifted, curved, warped, attenuated, slewed and smoothed.

ShapeMaster is like a musical Swiss army knife – It can be used for sequenced volume patterns, rhythmic gating, stutter effects, quantised pitch sequences (with glide), polyrhythmic/polymetric sequences, frequency based ducking/sidechaining, dynamics control, groove extraction, voltage processing, arrangements, automation and more. It can even be used as a draw-your-own-waveform VCO that tracks 1V/Oct. It does alias when used as a VCO though - sorry Bruce ;.)

What’s the difference between ShapeMaster Pro and the free version?

SM-Triggers: Additional trigger outputs on each channel - great for chaining envelopes in sequence or cascading them them in overlapping waves.

SM-CV: Poly CV inputs for external control of most parameters and an additional V/Oct input for using ShapeMaster Pro as a VCO.

uMeld: An 8 channel version of Meld, our poly merge module, tailored for use with the SM-CV expander.

ShapeMaster Pro is available now for $30 at

The MindMeld v1.1.13 plugin that includes the free version of ShapeMaster is available now in the VCV library:

There is a detailed manual available for ShapeMaster at:

Get a short overview of ShapeMaster right now! 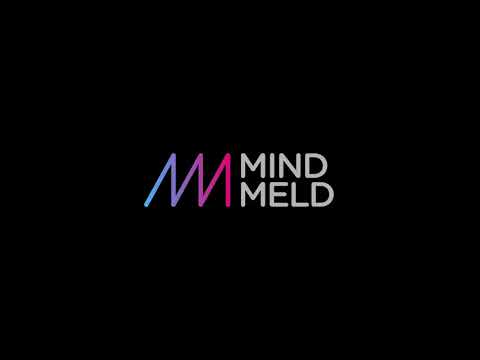 Omri Cohen has made an awesome video about ShapeMaster which will be premiering this evening at 8pm BST (British Summer Time) - please come and see what ShapeMaster can do and feel free to ask any questions in the chat. 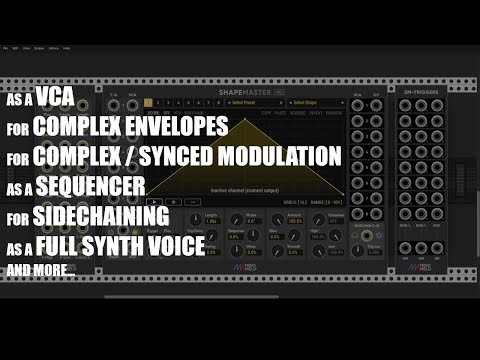 oh, very nice! Bravo. (And I’m very relieved that this new module doesn’t overlap with anything of mine that would get blown out of the water!).

edit: I don’t normally find product demo videos particularly amusing. But the feature list here is so impressive and overwhelming that I started cackling out loud at my desk. What have you two done?!

I’m delighted that it seems to make a few of mine obsolete!

If it can help, we did base some of the math in there from your writeup on sigmoids, so there’s a little part of you in ShapeMaster

I thought those S curves looked familiar! I’ll have to take a closer look at how your adaptation differs from my code. I do find the curve (originally from Dino Dini) to be a work of art.

Oh yeah, a new toy!!! And I thought I have to buy a werkstatt-01 or something similar to silence my GAS which is haunting me since the launch of the M1-Ipads yesterday. But this? Even better

See you at omris premiere later

Looks amazing. Never purchased a module so fast before…Thanks for all your work on this!

EDIT: I should add, I’ve been dying for something like this ever since I saw Acid Rain’s Maestro. Though there’s a lot of ways to generate more complex envelopes in VCV the big issue is always control and ease of use. The interface and workflow on this looks incredible. Not jealous of Maestro anymore!

beyond how it sounds, that is just beautiful. Appreciate you raising the bar.

me being me, I would like to somehow CV those node points

We did have on our feature list to offer CV control for 8 selectable nodes, but it was too complicated architecture-wise (for my coding skills at least), so we left that aside.

This is instantly one of my favorite VCV modules. You did an incredible job on the design and workflow. It’s like you mashed up Zadar and Control Forge, and then went and added multiband VCAs for fun.

I really wasn’t expecting to love such a complex module, either. I bought it mainly because I’ve always felt like MixMaster was something I should have paid for

I totally understand the dilemma - maybe something like what vult does, where you can choose what parameter to cv out of a list.

I’m sure you could do better, but I think the grids I have implemented in the Frequency Domain are a great way of manipulating a large number of parameters. (then it becomes really meta, since you would be drawing envelope shapes that describe how to modulate envelope shapes). I love this kind of stuff

Thank you Michael, that is very kind and gracious of you, and we appreciate it so much!

This is instantly one of my favorite VCV modules. You did an incredible job on the design and workflow. It’s like you mashed up Zadar and Control Forge, and then went and added multiband VCAs for fun.

I really wasn’t expecting to love such a complex module, either.

Thanks Michael - means a lot coming from you!

It can indeed go pretty deep - but we also put a lot of thought into making it intuitive and quick/easy to get going with. 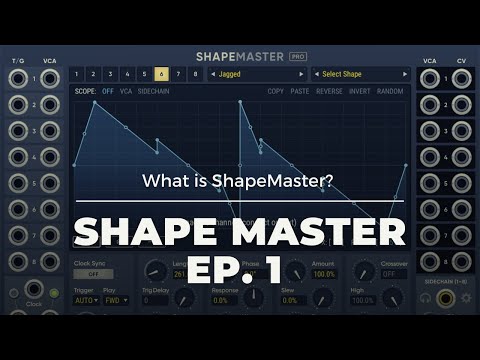 Very nice! I was working on my own MSEG thing, but this probably makes those efforts obsolete now !

One way to implement @almostEric’s idea for meta-meta(-meta?)modulation in an intuitive way would be to do it by region, not node: a start and stop region per channel, probably displayed with a little color bar below the curve. Modulation options (even linear shift and linear scale would be awesome) would apply only to nodes that existed within the region. It would be a little like a sub-curve “perturb” complement to the Warp function.

This is advanced enough that (to me) it would make sense as an expander-only feature. If the expander’s connected and wired up, the region bar appears in the relevant channel(s), and you get CV definition of regions with a start and stop voltage (presumably 0V leftmost and 10V rightmost), plus translate and scale. Lots of applications, including adding a little drifting variation to a defined loop, picking parts of the loop to be stochastically scaled to 0 or maxed out, etc.

You don’t have to worry at all about node selection and persistence because the update just scans the region for nodes that exist at whatever time step you’re using.

Getting this down just so I don’t forget it, not because V1.0 of this needs any more features

Happy to write this up as a more formal feature request once (1) I actually use the module; (2) you take a victory lap for producing something so awe-inspiring!

My love for CV is well known (if I haven’t made that clear), but I also do love me some expanders, so @gc3’s idea makes sense - the cool thing with that is you could chain expanders so you could manipulate as many regions as needed

probably could be combined with this region idea.

So yeah, have a celebratory beer or two, then back to work!