Hi! I decided to start this thread, cause the only similar topic was “Module ideas” and it is closed.

I have some ideas that i wanted to share, but now that i write it, i have a better idea: why not make it for the community, not just for my ideas. So let’s share our ideas for any interested developers that might or might not see this thread!

We need rules, but it’s all simple:

1) your idea should be possible (or at least you think that it is possible). For example, a reversed delay that would predict the next sound and play it before this sound appears is most likely impossible

2) no hardware clones, please, cause we already have a thread dedicated to that

Now I’ll start! I have some weird ideas:

A sequencer with layers, clocked by EOC of a sequence. So it is like a clockwork mechanism. There could be 2-4 layers or levels, each one has a set of knobs and the sequencer outputs a sum of different stages. For example, the first level sequence is 1234 and the second is ABCD, so 2 layers would give us A(1234) B(1234) C(1234) D(1234), It is a simple idea and i am not sure why I can’t find anything like that in one module. I have a name for this one: the celestial spheres. A bit cheesy, but i think it’s fine

Euclidean quantizer. Well, you can imagine what it does…

A “deconsecutiver”. Redirects a second gate or trigger of any two consecutive signals. If there was only one gate in two beats, it resets and is ready to pass through a gate. The reason why people would need it or at least I would need it, is that it’s annoying to have 2 or 3 or maybe even 5 consecutive gates out of Branches or Chances or any type of random gate module, so it would be better to cut it a bit. But it also would be cool to have this second gate to do something and you would lose it if you set branches to “latch” or set a counter to decimate a second gate.

A shift register that steals signals. I have a name for this idea too, I call it Judas. So it randomly selects CV signals and steals it (ie stores it instead of passing it through). A pool or “bag” is customizable, let’s say 1 to 16. So the stored signals gradually fill his “bag” until it breaks and all the signals go out in one burst (speed is customizable too)

Spectrum sampler. I don’t know why there’s no module that reads spectrum. There are lots of spectrum analysers, but no spectrum readers (except maybe Bidoo’s Emile, though it has some problems and i am not sure if it reads spectrum). We need it!

Corruption sampler. Samples a sound and corrupts it. I have a vague idea how it should work. And i am not sure if it would work at all that’s why i decided to put it at the end of the list

Well, that’s it for now. Please, share your ideas too!

Interesting ideas. What do you mean by a ‘Spectrum Sampler’? Could you elaborate on that?

Could you elaborate on that?

Sure! By the way, i use Blur quite a lot, haha

I mean a module that reads a picture as like it is a spectrogram. Like this one (stolen from wiki) 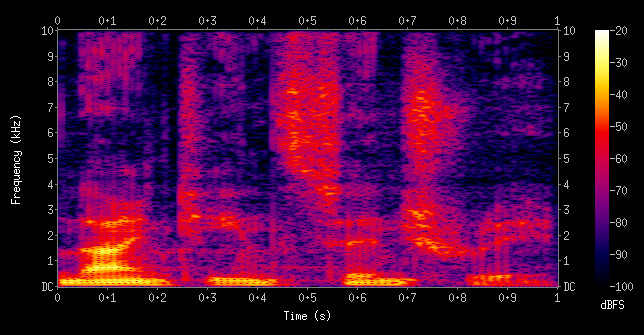 I know that there are ways to read it and I used to have a VST that does it, but it was so long ago i don’t remember anything about it… Maybe it wasn’t a VST, but a standalone program… Anyway! That’s what i mean by spectrum sampler. It reads the spectrograms and has a functionality of a sampler: start\stop\speed all that, haha

Sidenote: i am not sure, but it feels like granular synthesis have a similar idea behind it. That’s why you can slow it down without changing the pitch… Might be wrong though! Could be that it does something similar, but without printing a spectrum

Back to spectrum shenanigans!

Coagula was a software that I was thinking of yesterday! And it works fine in both direction… So if you write something there (for example I wrote Hello), the spectrum analyzer reads it fine. Though i believe i wrote it a bit higher… 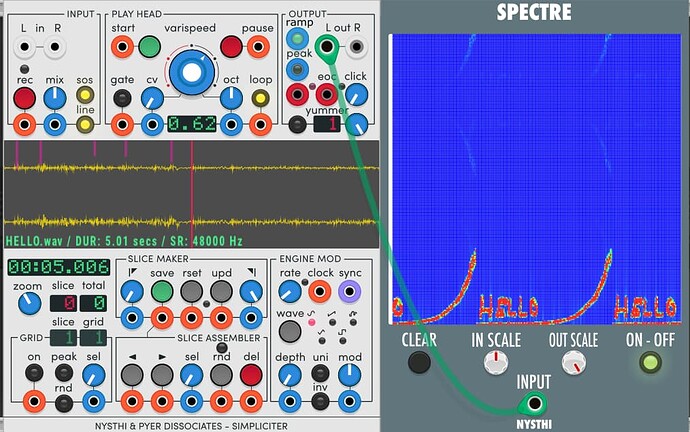 I’ve also found this: link I think this is a way to do that…

I’m more interested in having some more very good emulations of classic vintage oscillators and filters. Polivoks, SEM, MS20, Model D, Pro 2, CS-80, PPG, Prophet VS, etc. There seems to be a lot of FSU modules and interesting sequencers, but not much if you’re interested in different flavors or analog. I love how Cherry Audio does there synth plugins as voices for Voltage Modular. It’s just that they don’t sound very good.

Well, there’s a topic for the hardware emulated stuff. At least i believe there is… I am not a fan of it, to be honest. The vintage stuff is a bit overrated imo. That said, it would be cool to have it, obviously. I mean in hardware. That reminded me how I almost bought a broken Polivoks to try and repair it. It was back in 2005, i think. Anyway, then I decided to save money and not risk it. Who knows, maybe it was burnt to death, so there was no way to fix it.

The Lindenberg research VCOs and Filters (like the Alma Ladder filter) are also great for vintage moog type sound but although there is a beta for V2, it has currently expired - waiting for the release of the full version which will be a commercial release.

Cool! Looks a bit scary though… Intimidating. I was thinking about a simple module like Eugene by RareBreeds, but for quantization… But still, it is a cool module, Frozen Wasteland is a nice collection… Probably I should use it more and explore it, fight my fears of complicated modules

I want a device that displays the current bar & beat, given a 1/4 note clock in (or other divisions if possible) – need to be able to set the time signature by numerator and denominator, like 4/4, 7/8 etc.

I use a lot of sequencing ideas that obliterate measure divisions, i.e. they don’t end on an even measure boudary. These sound great against more regular beat patterns, but without knowing where the downbeat is, it’s hard to trigger sequence preset changes on the downbeat.

I think some kind of counter could help you. Like if you need 7\8, you could set it to 7 steps and connect the 1\8 clock there… Like this

That’s not exactly what you wanted and i would like that kind of module too, but this also works if you need some kind of counting

Also, this would count bars in a square or what you call it in english, i dunno 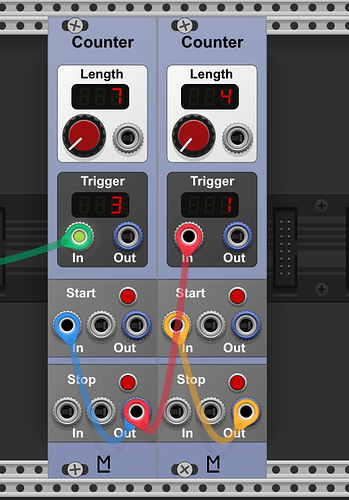 The AS BPM Clock has time signature, with trigger on bar and beat

I use a lot of sequencing ideas that obliterate measure divisions, i.e. they don’t end on an even measure boudary. These sound great against more regular beat patterns, but without knowing where the downbeat is, it’s hard to trigger sequence preset changes on the downbeat.

ShapeMaster Pro might be able to help you out here. It has a fair number of synced cycle lengths like dotted and triplet as well as ‘unusual’ ones like 5/8 and 7/8 etc.

When clock sync is on, ShapeMaster essentially counts clock pulses from the moment it starts running to keep track of where beats and bars start (important to connect the run and reset inputs to your master clock). This allows you to modulate the cycle length and it will still stay in time.

It might be a sledgehammer to crack a nut… but you could use the EOC (End of Cycle) on the Triggers expander to give you a trigger at the start of pretty much any time signature you want. If the particular synced length you want is not available in the length menu, you can probably create it by a combination of setting the Grid-X value (which determines how many divisions are in a cycle length - and it can be any number you want) and then using the “Use sustain as channel reset” function, which essentially allows you to place a reset marker (which can be snapped to the grid you set) anywhere along that cycle length - if doing that, you can use the EOS (End of Sustain) output on the Triggers expander which will fire a trigger when the playhead hits the sustain marker and the reset happens.

In other words you have control over the cycle length, the number of divisions in it, and can fire a trigger anywhere along the cycle you want, be it the end or anywhere else.

Additional counters that each have different strengths

Counts triggers and blocks/allows a signal after hitting a limit. Useful for timed composition changes, simulating components that break with overuse, or scaling a value based on the number of triggers.

A relatively new module with some nice options for the type of output.
The manual is pretty clear
upper limit of 1000

The bottom two counter sections can be very useful, with a couple types of output - trigger upon limit reached, as well as proportional voltage output showing current count.
Of course like nearly all the great Nysthi modules - minimal documentation

Perhaps the least number of output options. But well documented and well layed out

Jeez - I almost forgot the docB ACC accumulator module works well as a count down (or count up) timer. The increment can be set as small as you want, so there is practically no limit to the count. And unlike the other counters, the step size and the start voltage can both be controlled by CV

I want a device that displays the current bar & beat, given a 1/4 note clock in (or other divisions if possible)

I was thinking the same thing this morning. Actually, I was also wishing the REC module would also display record time in minutes and seconds,or just in seconds would be useful.

My old Meander for Windows app displayed both elapsed time and elapsed measures:beats:ticks.

Thanks. I need to integrate this into my record setup.