I had the most amazing jam last nigh, but this morning, Rack won't open.

So I had a toot and it might have not been “The Most Amazing” jam, but it was pretty damn cool. Today I tried to open the project and now Rack 2 itself will not open ANY project. I even re-downloaded Rack but same issue. I can perhaps post the project? Not sure how to do that. Anyway, any troubleshooting tips would be appreciated.

Edit - as a further measure I shut my computer down and restarted it. Upon launching Rack I get the “Rack crashed / buggy” message. If I say I say clear patch and start over it opens but I cannot open a project. If I say no it crashes.

Edit and deleted a message,

Further edit - and Rack is now killing Ableton if I try to open a project where Rack is a VST.

check log file in user Rack dir before restart, right after crash (at startup it seems) to see what causes Rack to crash exactly.

Sometimes deleting the files in the “autosave” folder will help. 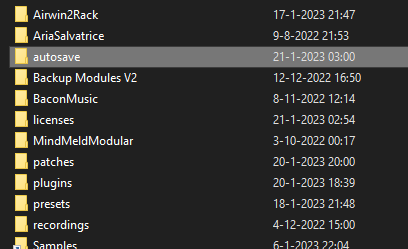 I have a list of 9 numbered files in Autosave in a file called modules, all dated the same November 11/22, all apparently empty. And oddly, I have one Max for Live patch in there as well which I will delete. But no, same issue, when I try and open it I get the “Rack crashed last time” message and if I choose not to clear it Rack simply doesn’t open. If I clear it I get an empty rack.

Where might I find this? I do not see a Rack 2 folder in my User AppData Local or Roaming files… 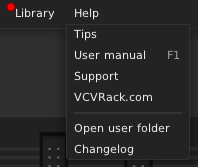 Ah… the log - Notepad file I take it. Didn’t really even notice it there before. Not that I know what it all means. Nothing stands out as an error. There’s no time stamp on any of these lines to match it up to when this occurred.

it gets rewritten every time you start Rack. So post it after a ‘not start’ (crash at startup)

And, to be clear, the expectation is that right at the end of the log there will be an obvious crash stack. This isn’t guaranteed 100%, but it’s usually the case.

Interesting. Okay, I tried opening the project in question again and the following is the last 21 line items:

Apologies that this doesn’t look quite as orderly as the log in Notebook - and even in the post window.

Are you sure you have tried deleting the autosave file?

Just tried it again - deleted the autosave file entirely, not just the contents. Got the same results - here is a screen shot of the above so it’s more ordered.:

Have to run for groceries… Quick edit - the Autosave file comes back with the same “modules” file that has 9 empty numbered files in it. There is also this “patch” module of a type called Max JSON.

line 11 looks like a data parse of a json for a module index.

Maybe remove the RPJVisualizer folder from the plugin folders and try to start Rack again ?

yes, crash certainly seems to be there. @robert.kock - any of this look familiar?

I think if you put three ticks around it, it looks better?

No doesn’t look familiar. But definitely caused by my module. Only thing, how can we get this crash if there is no autosave file? It says patch created with… . So looks to me like it is trying to load a default patch that already contains my module . And it is configured for an old version of the module. I have to check why it is conflicting.

I don’t believe the RPJ Visualizer is the problem, it just happens to be the last item in the list prior to the line that has the …“Fatal signal 11. Stack trace:”

Some of the others above it: 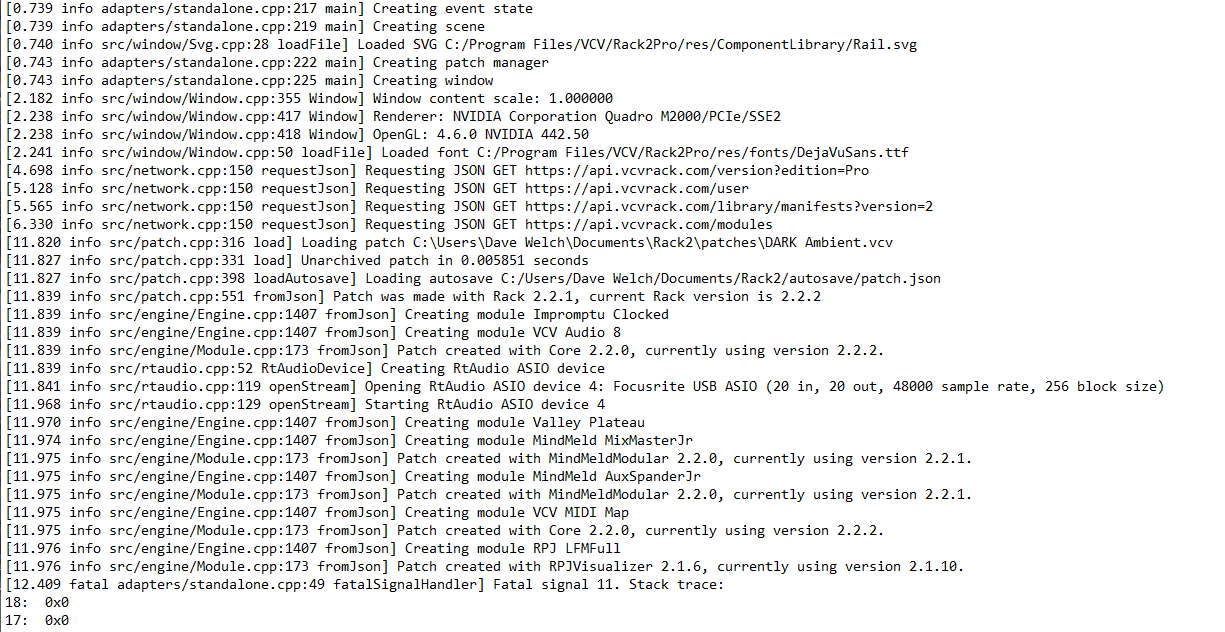 Did you try to delete the folder like @Yeager suggested? Just to see what happens?