Is there a way to send MIDI data, generated by a VST that is loaded into VCV Host, out/back to the rack?

I have tried similar things with max but without the host. Have you tried opening up the VST stand alone (if thats possible) and then sending the midi Data via an internal cable (for mac its the IAC-Bus). Ive had some good results crosspatching programs with this.

Have you tried opening up the VST stand alone

In this case, it’s not possible to run the VST standalone.

Hm, what about playing it from a DAW and sending the midi out via that way? If you have MAX experience, its easy to use the vst~ object. Then you can midi but even CVs out when you scale the output data correctly. (For CVs you would need something like audiojack or soundflower, cause ya know, its audio essentially)

If I really need it I’m using MuTools MUX and VCV Bridge to route MIDI back into VCV Rack. It is kind of a weird workaround but it works for now.

So it seems not possible to get MIDI generated in a VST out of the VCV Host module and directly into the Rack without a roundtrip over the OS.

It needed a bit of tweaking but MuTools MUX is able to convert notes/velocity/whatever internally to CV, no more Bridge VST… 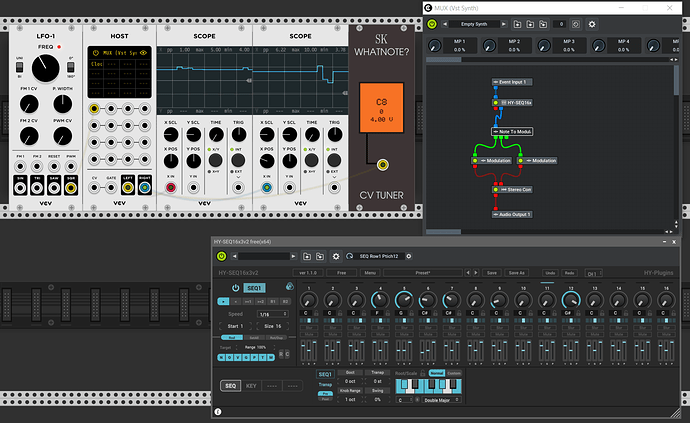 I have to thank you. Because of your question I played around a little more and got a gate-signal and pseudo 4-channel polyphony working with MUX. The main problem is now that Host-XL has only 8 outputs… 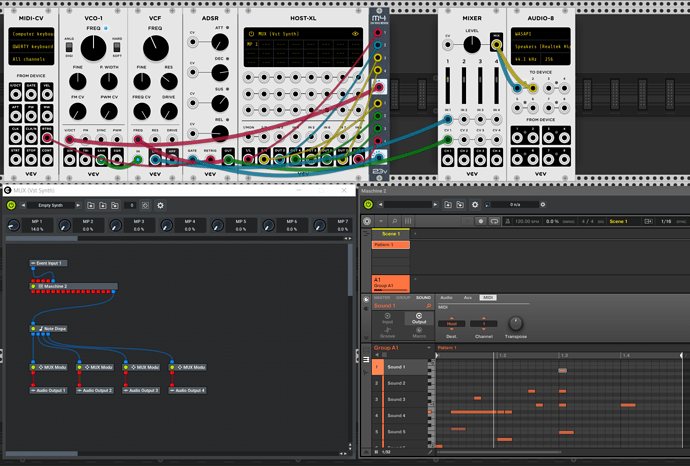 (of course, it would be much easier to make the MIDI-CV module to work as an expander for e.g. the HOST-XL module, but the later one ist closed source)

That’s funny and interesting, I‘ve implemented „MIDI as audio“ as a helper module some time ago, but for use with Expert Sleepers hardware modules (sends MIDI data encoded over an audio channel, more or less)

As it got mentioned in the development blog: Here is a first look at the MIDI driver. Each instance (up to 4) of the ES MIDI module creates 8 ports in the MIDI driver. The output ports should be connected to the Expert Sleepers 8GT module. It is essentially the same as “CV to MIDI” but this way you can send any MIDI message using the existing modules. For debugging porposes I created a specialized scope to review the bits of the encoded MIDI messages. [Img…

I think sending out MIDI from a VST to a custom Rack MIDI driver could be the most elegant solution, this way you can reuse all existing MIDI modules and it is quite easy to write a MIDI driver in Rack. This would be a nice built-in solution for VCV Host, @Richie

In one of his live streams Andrew spoke about future updates of VCV Host and he said next would be VST3 support (which was released in the meantime) and after that MIDI output will be added. Maybe we will see such function in Host soon.

Thanks for the suggestions!

(But please note that it’s Andrew who sets the agenda for Host, not me.)

I just like to chime in here, it is indeed a pitty that Host can not send midi back into VCV rack (through another dedicated module for this purpose, or expander on the side).

Cause i bumped into this issue when i wanted to send out midi generated by the player rack extensions in Reason 11 VST plugin, and realized that this was not doable in VCV Rack.

I remember Andrew saying that he prioritizes new features for commercial modules on the customer feedback he gets. This means everyone who wants this (MIDI output for VCV Host) should write to contact@vcvrack.com to bump up its priority. I haven’t yet but will do soon.

Yes you are right about that, i will send en email too with an explanation why it is useful.

Is there a chance to add Midi Out to VCV host if the vst supports it. That would open up a...

I wrote a small VST and a small module to make a proof-of-concept. And yes, it works!

I think I’m getting very close to release my new module and the VST. Here’s a first screenshot. The module provides 8 inputs. Each input can carry up to 16 MIDI channels. This makes 128 MIDI channels available for routing inside the Rack.