How do you classify your patches 📂

Do you have a method to classify your patches (for example by year, by style, by alphabetical order, by all these criteria…, maybe you don’t keep anything

I don’t always but I tend to prefix patch names with a category, e.g. soundscape, fx, track, preset (e.g. an “instrument” playable by MIDI).

I like to name my patches after days – specifically the day I start the patch. 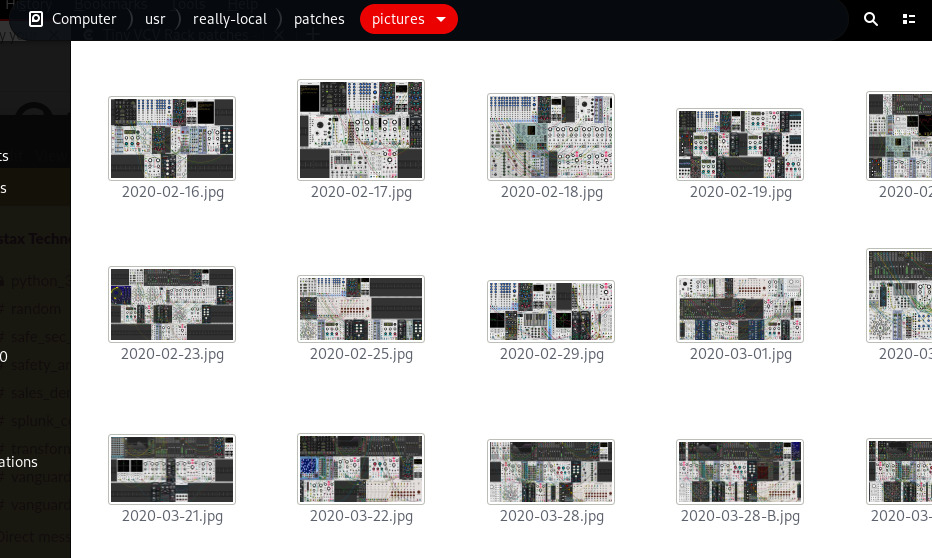 Most of my patches/compositions are sketches that are for my use only, but if something becomes a basis for something I release I’ll give it a more proper name at the time of release.

I like to know something before I name it (as is evidenced by the fact that my son was a couple of days old before we gave him a name!).

The chronological naming actually works petty well for me, as there is some self-organization going on at various time scales. The year, could correlate to technology stack (2020 == VCV, for example). There also tend to be weekly or monthly correlations. Also, at any given time I can know how long I’ve been working on a patch and to know if it’s time to move on…

I’d never thought of the idea of taking pictures of patches as well for reference. That’s really good. Seeing the patch before opening it up would work great for me.

In general by year. Inside that folder there might be some folders per project.

And all of that is subject to change

Oops, I mostly work with the same modules

here are some ideas

"How do you rename your files?" (Draggonrabbit63 question) Lounge

There has been a very short discussion in the chat of the last @Omri_Cohen video, about how do you (in general) name your files: Dragonrabbit63: ​Omri, I’m curious, how do you name your files? Because I personally have more then twenty odd WIP files, and was wondering if I could get some naming inspiration! rsmus7​​: I use the Date, maybe the main module I use and a a kind of description like drum or melodic or… and version numbers Dragonrabbit63​: Thanks! Mine are mostly WIP 1, WIP 1 with s…

I don’t. I mostly treat VCV as an ephemeral hardware system. 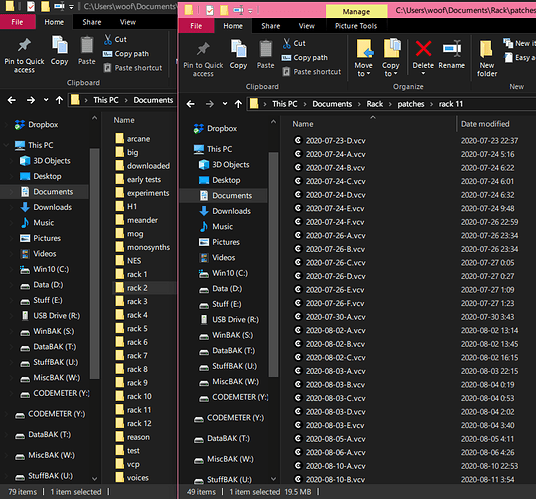 I only make an exception when I create voices controlled by my DAW, saving alongside the Reason project file - but even then after I record the part I generally never revisit it.

It’s clear to me I will almost never revisit an old VCV patch. But I like finding my session as I left it the last time I used VCV, so I take a lot of snapshots. I almost never revert to them, unless I encounter a crash. So there is no point having a good tagging system. If I want to revisit an old idea, I’ll just patch it again from memory, from scratch. 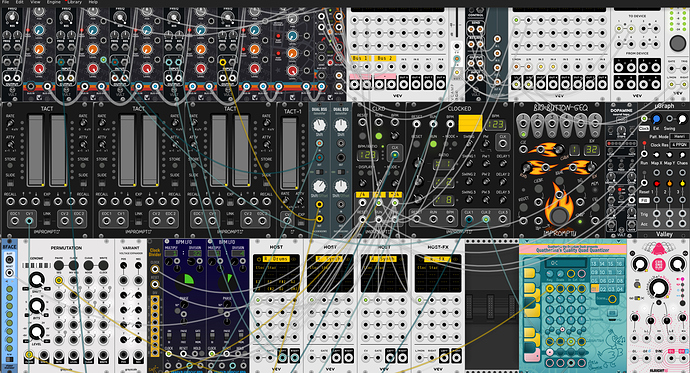 The top rows have permanent modules, mapped to MIDI. Anything below is added or removed as-needed. I used to have fixed racks, but ran into CPU issues all the time due to some of my favorite modules not having checks and stop processing when outputs are unplugged. White cables represent the hardwired parts of my system: I can reset it by unplugging all the colored cables and removing every module below the 4th row.

I always give mine working titles, and usually those are the final track title, or I’ll change them once they’re recorded to a proper track title. But I always start with an idea of what I want the sound to be like. That sound gives me an idea for a title. Whatever sound comes out the other end gives me an idea for the title, if it’s not the same.

Here are some of my V1 titles: 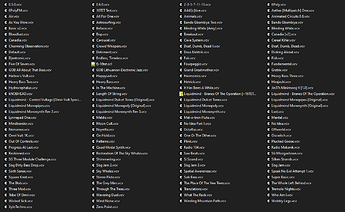 At least half of my patches are called “acid [something]” for some reason, I don’t do acid (well kinda).

Beyond naming them with a working title or something random (usually based around a key feature) - I don’t classify my patches.

I classify most of my patches as “unfinished”.

I mainly use VCV Rack as a (very) flexible keyboard preset engine. My file names reflect the sort of sound, or the impression I intend. Examples: flavio.vcv is an attempt to recreate Flavio Primoli’s Minimoog kazoo lead sound from early PFM songs. Cars.vcv is a stab at the Prophet V sync patch used in the Cars song “Let’s Go.” Music-and-lights-bass.vcv is a stab at the bass sound from the Imagination song of that name as inspired by a Doctor Mix video. Whoop.vcv tries to mimic the Lyle Mays Oberheim lead from AFWSFWF. Slowpad.vcv is a polyphonic pad based on the filtered noise into rings idea posted recently by koma2000. Huey.vcv is a chopper sound effect. Given that one can use multiple instances of midi-cv to make a multitimbral patch, I’d name those by song if this was for live play.

I don’t know why I bother, because I never go back to patches, unless it’s a revision for a client… but it’s a simple system of year-month-day-version number, and possibly style or title if there is one. I record stuff to audio or video, and it’s done. Starting over with an empty rack, aka pulling all the cables.

To me, that’s like tossing your guitar in the fire once you’re done with a song. Each patch I make has a particular character, and it makes certain demands in playing. Over time I build a set of instruments to approach via the keyboard, and why would I toss them except to iteratively improve them?

I am reminded of Steve Earle’s (former) habit of buying a new guitar upon which to write each new song. While obscenely expensive and perhaps a little materialistic, he apparently found it inspiring to start fresh “finding the music” in a new instrument each time. If your instrument is a virtual modular system & that method works for you, why not? OTOH, if returning to a fixed rack (or a set of them) to learn it more deeply is your path, then that’s cool too.