How do I (slowly) inject fixed voltages into a given v/oct sequence?

I have an arp playing and I want to be able to turn a dial and have more and more notes gradually transpose to +5 respectively +12 semitones. I can/could think of convoluted and HP-heavy ways to achieve this but I’m sure there are cleverer solutions?

(Normally I’d use Geodesics’ Fate for a similar outcome, but Fate wants a quantizer and here I’d like to retain my hand-tuned, slightly off pitches)

Sounds like a Bernoulli gate would be useful here - output A is your original sequence and output B is your transposed one - gradually increase probability from A > B.

What I mean is both sequences are playing at the same time (original and transposed), each with their own envelopes, and the Bernoulli gate determines which envelope gets fired.

No doubt there’s other ways to do it, but this way seems quite straightforward.

I am a big of AS Flow for that kind of thing. Have some voltage behind it to add to your sequence and have it triggered by gate/ bernoulli gate or manually…

Cool. I set that up with a chord arp and injected chord note +1 octave shifts This gives me lots of ideas. I’ll have to try with a fixed sequence and see what all I can do. Thanks.

Thanks, but there’s an issue, no? Every other trigger will switch it off? So I’d need to set the Bernoulli to latch and I found it might catch the Flow in a reverse state and then 100% probablity becomes 0.

What I’ve done for now eventually, Offset’s Scale is my semitones: 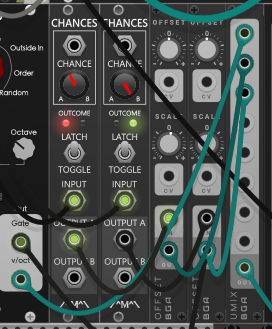 Another issue with Flow is that it has a slew limiter, apparently. This shows up audibly if Flow is used to switch a V/Oct signal. It would probably work fine if a CV was being switched.

Steve, is something like this what you were suggesting? In this the CM switch is fed with a chord triad of notes. There are two FM-OP sound modules whose gates are supplied by the Bernoulli Gate outputs. The original CM switch V/Oct output goes to the first FM-OP and the same plus a 2V octave offset goes to the other FM-OP. Each FM-OP has its own gated envelope settings. This sounds pretty good. 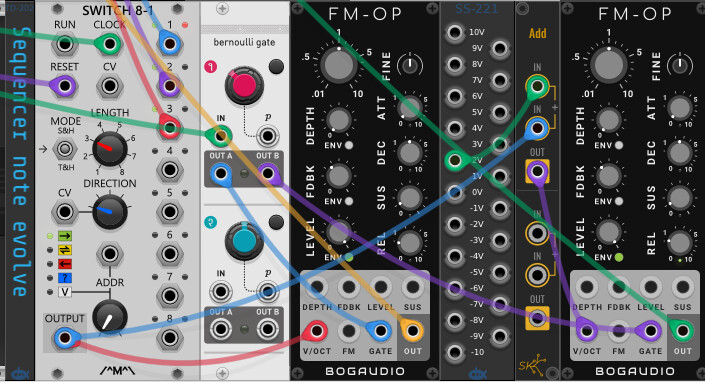 I’m not trying to hijack this topic, but I have been wanting to have an evolving sequencer for a while and this is a good opportunity to have a discussion of possibilities.

Yep - that’s exactly what I was suggesting

Your method produces some nice evolving sequences, especially if I use Submarine SS-212 in addition to SS-221 to offset by semitones rather than octaves. A 3 input adder could do both at the same time. When I do that with a arbitrary sequencer, I run the v/oct outputs through a quantizer before going to the FM-OPs.

Yes, it will be interesting to make the chain even longer. Of course I could sequence the semitone offsets also so that there is even more variation.

Of course I am doing all of this with Meander and using the Meander poly external scale output to Grande Quant for the Meander heptatonic or pentatonic scale options.

That works quite nicely also! It gets more difficult for me to keep track of what is happening. I’m able count 1, 2, 3, many

Next, I am going to try creating an 8 step sequence where each step can be sequenced (with each sequence possibly running a different x2N clock rate) as to octave and semitone additions with 8 voices and thus envelopes. Wish me luck.

Is anyone aware of a sequencer or sequential switch that outputs the step CV (v/oct) through its own outport, as several will output a gate or trigger per step? Ideally, outputting a CV and a gate and/or trigger per step would be ideal. Thanks.

No, but I’m not sure where I pulled that from. Seems like it may have been some anthropologist.

I decided to see how far I could push this approach but with a bit different modules manifiest. This is a demo recording of a 4 step sequence where each step has it’s own output and FM-OP with differing envelopes and feedback settings per step. Each step also has it’s own mutation sequencer where semitones and/or octaves are added to the base sequencer step note. Some steps are not mutated so there are ostinatos that repeat, interspersed with mutating steps.

Here is the row of modules doing the mutating steps sequencing. It is more complex than I wanted as I could not find a sequencer or sequential switch that can output the step v/oct value through it’s own port. In lieu of that, I am using the Voxglitch Digital Programmer as the base random sequence since it has an output per “step”, but it is not being stepped. Each slider range is set to 0-1.0v . Only the first 4 steps are being used in this.

I like using this approach to have different sequences evolve into one another:

In this case its done at the V/oct level so you only need one voice.

The LFO is controlling the bernouli gate.

In this case its done at the V/oct level so you only need one voice.

Yeah - that’s my main issue with the method I suggested before - it requires a separate voice for each transpose, but it does offer a lot of control. Doing it at the V/Oct level is certainly a more efficient approach.

Yeah - that’s my main issue with the method I suggested before - it requires a separate voice for each transpose,

I balked at first with your suggested method, but, the more I played with it, the more I liked it. I’m not opposed to complexity if the results are worth the effort. Of course, I took the technique to an absurd level. but still very interesting, to me

I implemented your approach into my test patch. It sounds very good. So, are there two sequences or just one that plays in different ways?