ah, so results are all familiar now. Fundamental VCO never liked synching to the sawtooth output of another Fundamental VCO. The results look on the analyzer like aliasing, but I think it’s really phase jittter. I’ve run into this before. Luckily the sine and tri outputs work great to feed into the sync input.

Among the new features:

Finally attenuators. Now maybe this will motivate the remaining hold-outs who’d don’t do this. Although attenuverter are what most modules do, and imao is better.

They seem to be attenuverters where appropriate. But isn’t this the wrong thread to discuss these?

The Wavetable VCO & LFO are completely new I think and can load 3rd party wavetables. The LFM is new (and through-zero at least on the Wavetable VCO). The LFO and the delay are now syncable. Quite significant changes to the Random module too. And the ADSR has an envelope visualisation window.

Among the new features:

Lately I spend a lot of time with the Chaos Family. I can tell that the more I see the new red-button-layout the more I like it.

I was looking for some noise sources and started playing with the Hetrick modules, they are pretty awesome, just wanted to say thanks for these, Michael!

The Supercollider ones bring back memories for sure. I tried to get into Supercollider multiple times over many years, it’s such an interesting environment, but just never quite found an electronic music environment that brought out as much creativity in me as VCV Rack does. Very glad to get to play with Dust and Crackle again.

Version 2.1.0 has been submitted to the library.

Two new modules: Vector Mix - 4 channel cartesian mixer, fully polyphonic. Can be used for vector synthesis, creative mixing, or 2D modulation generation. Gate Junction Expanded - This is an expanded version of my Gate Junction module. It now has dedicated trigger inputs for toggling the Mute and Invert sections. Additionally, there are now 8-channel polyphonic inputs, and an 8-channel polyphonic output. On this module, the polyphonic inputs are ORed with the standard inputs.

lin-arm64 builds armv8-a+fp+simd arch. Experimental build VCV - Google Drive is in there somewhere. I remember building it a few minutes ago.

On vacation at the moment, but I’ve started work on 2.2.0. I just pushed Probability to my repo. I’m very happy with how this module turned out. It acts like Branches with more modes and full polyphony. 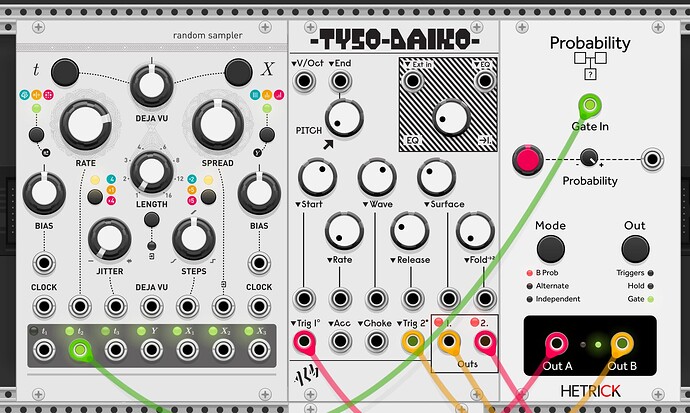 I pushed that last update too quickly! I did some testing and realized I forgot to tell the outputs how many polyphonic channels to use. Now it works:

It was written from a hammock. I refuse to write unit tests while in a hammock.

well, that’s a good thing about writing your own software - you can do whatever you want! It’s very refreshing.

"Dear Sir, We are writing to you to see if you would consider some free unit testing giveaway. So far we have a free vocalist sampled from the mines of Congo …

… don’t wory about him though, he might get paid enough to afford to buy his own gimp mask next Christmas. …

As usual, I don’t understand your comments. In any case, I’d like to think that @trickyflemming are on reasonably friendly terms.

As it happens, I like writing unit tests, so I wrote hundreds or thousands of them for my old modules. Other ppl maybe don’t like doing that, so they don’t - that’s fine.

I will confess it was a mild dig - I always write tests that polyphony works like I want it to, so there is probably and zero percent chance of making that particular mistake with a simple test. But there are plenty of ways to make reliable software, all of them are fine.

I can understand the need, but I also don’t write unit tests unless it is a necessity of the job description. I prefer a good old hard fail, and not even an assert or helper null handling behaviour (as that doesn’t catch all). Debuggers are fine for some things but for real-time the breakpoint concept is inadequate as timing can be delayed into an alternate error point.

If a unit test is required, then it is often a mistake to compile it out of the release code, as the test itself has some merit as a timed proof of work entropy source. Even users should be able to test suite a thing if possible.